Above: The main object behind cyber stalking is sexual harassment

With the advent of the internet, cyber crimes have increased. Victims need to know that they should file a complaint fast so that the stalker is arrested

Information technology has become the axis of today’s global and technology developments. With the advancement of the internet, crimes using this tool too have widened. Cyber crimes pose a great threat to individuals, especially women, who form 90 percent of the victims. Of all the cyber crimes, cyber stalking is the most common and affects men and wo­men disproportionately, especially in the age group of 16-35.

There are three kinds of cyber sta­lk­ing. The first is e-mail stalking and can take many forms like unsolicited, ob­scene or threatening mail.

Then there is internet stalking. Here the stalker uses the internet to slander and endanger the victim. In such cases, cyber stalking takes on a public rather than a private dimension. What is disturbing about this form of cyber stalk­ing is that it is likely to spill over into the physical space.

The third mode of cyber stalking is computer stalking which exploits the workings of the internet and the Win­dows operating system in order to assume control over the computer of the targeted victim. It is probably not widely recognised that any Windows-based computer connected to the internet can be identified and connected to another computer through the net.

The main reason behind cyber stalking is sexual harassment. The stalker creates a photo of the victim and threatens her in order to have sex with her. He threatens to upload the photo or video of the victim. Another reason is fascination for the victim with whom the stalker has affection. If she refuses to accept his proposal, he stalks her and can’t accept the end of the relationship with her. These stalkers are abnormal and the victim may be killed by the accused as happened in the Priyadarshini Mattoo case. The third reason is revenge. If the victim has refused the stalker’s proposal, then he is out to take revenge. The victim does not have knowledge about this.

Recently, we have seen various cyber stalking cases leading to amendments in the Information Technology (IT) Act. A few leading cases are Manish Kathuria and Vinupriya. The Kathuria case was the first reported case of cyber stalking in India and led to the 2008 amendment to the IT Act. It involved the stalking of a woman, Ritu Kohli, by Kathuria. He followed her on a chat website, abused her, using obscene language, and then distributed her telephone number to various people. Later, he began using Kohli’s identity to chat on the website www.mirc.com. As a result, she started receiving almost 40 obscene telephone calls at odd hours of the night over the next three days. She reported the matter to the Delhi Police, who then traced the IP addresses and arrested Kathuria under Section 509, IPC. The IT Act had not come into force then. While there is no record of any subsequent proceeding, this case made Indian legislators wake up to the need for legislation to address cyber stalking. And in 2008, Sec­tion 66-A was introduced.

This Section says: “Any person who sends, by means of a computer resource or a communication device,—

(a) any information that is grossly offensive or has menacing character; or

(b) any information which he knows to be false, but for the purpose of causing annoyance, inconvenience, danger, obs­truc­tion, insult, injury, criminal intimidation, enmity, hatred or ill will, persistently by making use of such computer resource or a communication device;

(c) any electronic mail or electronic mail message for the purpose of causing annoyance or inconvenience or to deceive or to mislead the addressee or recipient about the origin of such messages, shall be punishable with imprisonment for a term which may extend to three years and with fine.” 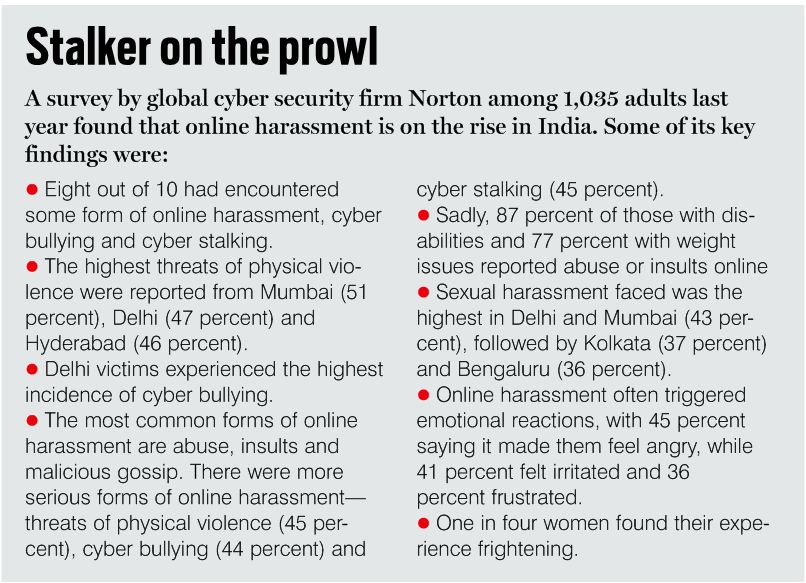 In the Vinupriya case, the victim was a 21-year-old student from Salem who had finished her BSc in chemistry. A person had posted morphed nude and semi-nude photographs of Vinupriya on Facebook. On June 23, 2016, when the first obscene photograph appeared, she informed her parents, who then lodged a complaint with the Cyber Crime Cell. The police, either lacking the investigative skills to trace the origin of the photograph or lacking interest, told Vinupriya’s father that they would nab the culprit in two weeks. On June 26, another obscene photograph was posted on Facebook, leaving Vinupriya traumatised. The investigating officer assumed that she must have sent those pictures to someone and now they were being posted, perhaps by a jilted lover. The questioning of Vinupriya was along those lines. It humiliated her and on June 27, she hanged herself.

To prevent being a victim of cyber crime, a person should quickly take action against the criminal. She should make a complaint to the Cyber Crime Investigation Cell, a branch of the Criminal Investigation Department. These cells exist in Delhi, Mumbai, Chandigarh, Hyderabad, Bengaluru, Gurgaon, Pune, Lucknow, and other major cities. As women are mainly victims of this crime, it is necessary to improve the investigative mechanism for cyber crimes. Then only will women feel safe and empowered.