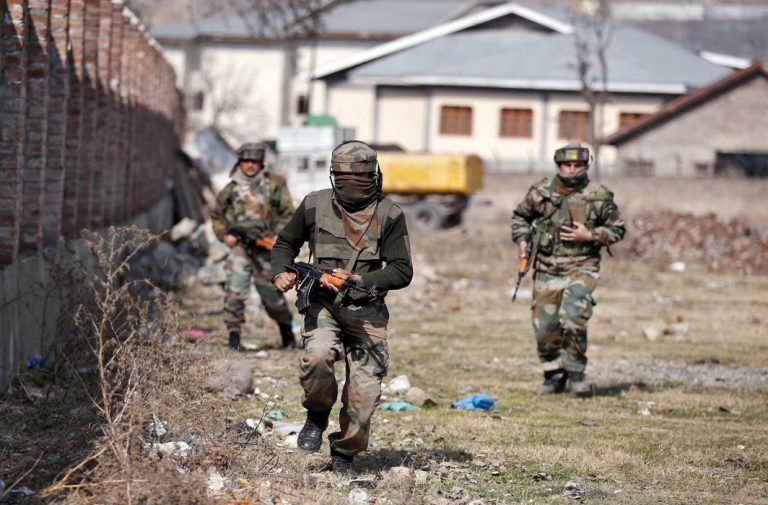 Above: Indian Army jawans taking position near the site of a gunbattle with militants in Jammu and Kashmir

The annual budgets for the armed forces have shown declining outlays for modernisation, thus affecting new projects. It is more to do with the government’s mindset

Prime Minister Narendra Modi is probably happy to see leaders of foreign governments, one after the other, making a beeline to New Delhi because it indicates increasing recognition of India as an important global player. Modi has partly succeeded in preventing India’s strategic influence from being overwhelmed by China’s increasing power play in South Asia and the Indian Ocean Region. The Maldives slipping into China’s fold, disregarding India’s objections, has shown that India fulfilling its strategic dream is still in the making.

The Chinese dragon will continue to roll on because President Xi Jinping is trying to live the China dream. His strong global pitch is not only backed by deep pockets but also the People’s Liberation Army’s military muscle to defend China’s increasing global assets.

Though India has overtaken China in its GDP rate of growth, surprisingly its armed forces are still to make up their decades of deficiencies even in meeting the essential needs to defend the country, let alone safeguard the country’s increasing global assets. Nothing illustrates the crisis situation better than the army informing the parliamentary standing committee that it does not have enough money to pay for ongoing schemes, emergency procurement and weaponry for 10 days of intense war, future acquisitions and also strategic roads along the China border. The report, which the committee tabled in Parliament, has quoted Lt General Sarath Chand’s deposition that the defence budget “has dashed our hopes” and “marginal increase in it barely accounts for inflation and doesn’t cater for taxes”.

This year’s defence budget has been increased by only 7.81% to Rs 295,511 crores from Rs 274, 114 crores last year. The defence outlays is about 1.58 % of the GDP, the lowest such figure since the 1962 war with China. It had been steadily declining in percentage terms as the economy expands. With the chances of collusive threat from Pakistan and China, we need to double it if armed forces are to manage the current threat.

The annual defence budgets have shown declining outlays for modernisation, thus affecting new projects. About 80 percent of the outlays are for committed liabilities for financing arms deals inked in earlier years. This has meant that the armed forces will continue to grapple with critical operational shortages even to wage conventional war.

But it is not about money, but more to do with the mindset of those in government. Successive governments have been tall on talk but short on making the armed forces fit for war. The Raksha Mantri’s operational directives and the 15-year Long Term Integrated Perspective Plan have never received the attention they deserve from the government. There is a clear disconnect within the government; otherwise it is difficult to explain the finance ministry failing to approve the 10th (2002-07), 11th (2007-12) and 12th Five Year Plans formulated with the existing threat perceptions.

I am writing this with a feeling of déjà vu; I remember what former Army chief General VP Malik wrote in 2012, 12 years after the Kargil war. Twenty days after taking over as the Army chief, while addressing the prime minister and the Cabinet Committee on Security in a combined commanders’ conference on October 20, 1997, the general described the state of the Army as “the spirit is strong but the body is weak”, indicating the deficiencies in arms, ammunition and equipment.

In March 1999, just before Kargil war, he wrote to the then Defence Minister George Fernandes stating “The army is finding that major acquisitions get stymied for various reasons and a feeling of cynicism is creeping. By and large, the prevailing situations is that nothing much can be done about the existing hollowness in the Army. By denying essential equipment, the armed forces would gradually lose their combat edge, which would show adversely in future conflict.” And it showed up during the Kargil conflict when ammunition for Bofors guns was procured from international market and rushed post haste to battle front. Are we waiting for another “Kargil” to happen once again?

There is no point in finger pointing, because the problem is past that stage. Though I am no great admirer of Churchill, I cannot but quote him in War Memoirs, “United wishes and goodwill cannot overcome brute facts. Truth is incontrovertible. Panic may resent it. Ignorance may deride it. Malice may distort it. But there it is.”

So our priority should be to immediately put together 10 days’ war reserves to start with; we can talk of two-front or two-and-a-half-front wars thereafter. Otherwise, India’s failure to attend to these longstanding deficiencies may well prove to be PM Modi’s tripping point in realising his strategic dreams.

I hope the PM realises the urgency of the crisis the armed forces are facing, particularly when the situation along the LoC has become incendiary, with the Army hitting hard Pakistan Army bases supporting terrorist infiltration, under the gaze of China—Pakistan’s strategic partner—which keeps reminding us of Doklam.

—The writer is a military intelligence specialist on South Asia, associated with the Chennai Centre for China Studies and the International Law and Strategic Analysis Institute