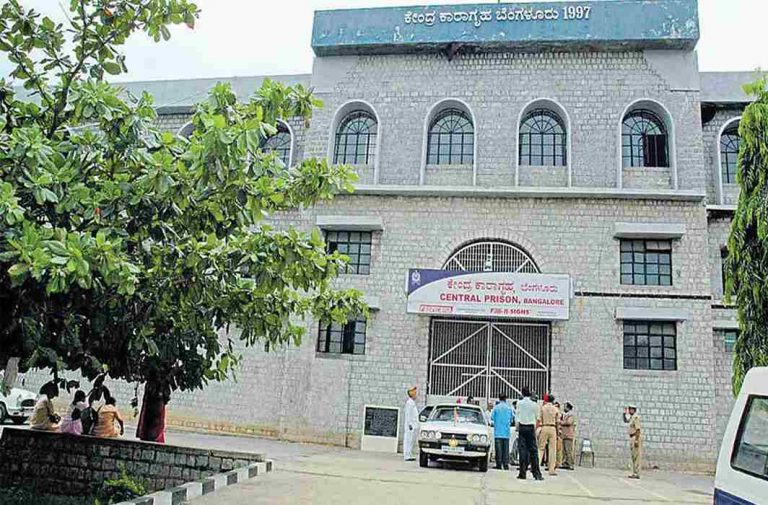 Above: Parappana Agrahara Central prison, Bengaluru, where Sasikala is jailed

Ebullient Karnataka DIG (Prisons) Roopa Divakar has set the hound among the wolves by her revelation of the rot in Bangalore’s Parappana Agrahara Central Jail. She has reported that AIADMK leader Sasikala is living in semi-luxury in the prison with a special kitchen and cooking facilities, TV and gym, as well as a separate “reception” room to receive visitors. It was also reported that visitors were allowed to stay beyond the stipulated time with no regard for restrictions and regulations. For these, a bribe of Rs 2 crore was paid to the DGP (Prisons) and other prison officials, she alleged.

Roopa’s scathing report has more on the VIP culture that exists in the prison. Abdul Karim Telgi, the mastermind of a fake stamp paper racket worth billions of rupees, is serving a 30-year sentence at Parappana Agrahara. He also enjoys luxuries in his cell, including 3-4 undertrials who massage his legs, hands and shoulders. Telgi had become infamous for the use of mobile phones inside the prison.

Similarly, mining baron and former minister Gali Janardhan Reddy, who underwent incarceration here in 2014, not only enjoyed a separate kitchen but also a gymnasium, two servants and had a sports utility vehicle to visit court. His food, apparently, came from home.

Let us see what the rules in the Karnataka Jail Manual say about these privileges. For food, what is allowed is a combination of prison-cooked rice with wheat or rice with ragi. This is served as breakfast, lunch and dinner at 7 am, 11 am and 4 pm respectively. Even undertrials are not allowed to procure their own rations or cooked food from private sources, let alone convicts like Sasikala and Telgi.

As for living space, a prisoner is allowed 3.71 sqm (39.9 sqft) of ground area in dormitories/barracks, in addition to 15.83 cubic metres of air space and 1.12 sqm of lateral ventilation. In cells, 8.92 sqm of ground area is allowed per inmate. Regarding interviews, the allegation is that Sasikala had met visitors 12 times in a month as against the permissible limit of one visitor per fortnight.

Roopa’s revelations led to her being slapped with a notice for disciplinary action and Karnataka Chief Minister Siddaramaiah is on record saying: “We have given her a notice…. going to TV and newspapers: that is prohibited. Service rules don’t permit.”

Roopa, being an IPS officer, is subject to All India Services (Conduct) Rules, 1968 and Rule 9 is applicable here: “Unauthorised communication of information. – No member of the Service shall except in accordance with any general or special order of the Government or in the performance in good faith of duties assigned to him, communicate directly or indirectly any official document or part thereof or information to any Government servant or any other person to whom he is not authorised to communicate such document or information.”

It all depends on how this Rule is interpreted. Roopa can take shelter under “the performance in good faith of duties assigned to him” and therefore, would not be liable for any disciplinary action. In the event, her abrupt transfer can be considered as penal action. This would also unfairly deprive her of the opportunity to properly prove her point before the inquiry commission appointed by the Karnataka government.

Roopa is not the first All India Services (AIS) whistle-blower to face such a predicament. There have been others. Why? Because even decades after Independence, pet theories, myths and mindsets of the colonial era about the civil services still persist.

First and foremost is the “practice of Omertà”, i.e. “a civil servant should be seen, not heard”. Under this anachronistic arrangement, some of India’s best minds that constitute the AIS (IAS/IPS) are being choked and   wasted as mere status quo time-servers.

By remaining silent and not being able to speak against corruption and misrule, the conscientious among the IAS/IPS officers are fast losing their principles and personality. This is unacceptable, particularly in the face of mounting venality in governance that is destroying the fibre of our democratic polity.

Second is the notion of “subservience to political masters” that envisages a meek and “abdicating” role for IAS/IPS officials. This is an aberration since AIS is covenanted in the constitution (Article 312) and its officials have a statutory role to play in giving honest, fair and just governance to the people, particularly those the ruling politicians do not represent. In our skewed electoral system of “first-past-the-post” and the reality of low voter turnout, ruling politicians represent only a minority of the electorate and the people. If IAS/IPS officials surrender to the rulers-of-the-day and do their biddings without demur, “where will the majority flee”?

Dismantling these archaic hangovers and undoing the practice of Omertà is the challenge and the opportunity for IAS/IPS officers committed to the constitutional scheme of governance. Roopa seems to be one of them.

As for India’s prison management system, it is retrograde and degenerate. A quote from Anca Verma, wife of notorious arms smuggler Abhishek Verma says it all: “If you steal 1,000 rupees, the hawaldar will beat the shit out of you and lock you up in a dungeon with no bulb or ventilation. If you steal 55,000 crore rupees then you get to stay in a 40-foot cell which has four split A/C units, internet, fax, mobile phones and a staff of ten to clean your shoes and cook your food.” (From Sunetra Choudhury’s book, Behind Bars: Prison Tales of India’s Most Famous)

The reasons are not far to seek. Till some years ago, prisons were headed by officers from that cadre or the district magistrate who belonged to the IAS. When I was District Magistrate, Chandigarh, in the mid-seventies, I was concurrently Inspector General, Prisons of the Union Territory. That was how I could keep Jayaprakash Narayan from the prying eyes of the police (IB and local) during the Emergency and get him out to safety as his health deteriorated badly, thereby help save democracy. This would not be possible today because the IG Prisons is an IPS officer.

This is so all over the country. Prison cadre stands virtually decimated and IPS officers have taken over the department. This has concentrated extreme power with the police vis-à-vis suspected/convicted criminals—registering a case, investigation, arrest, charge-sheet, prosecution and detention. In the event, corrupt police top-brass and prison officials in nexus with politicians and criminals can do anything and get away with it.

The post-revelation shenanigans in Karnataka—removing Roopa, issuing a gag order, erasing evidence, midnight shifting of complaining inmates—prove the existence of such nexus. There is no magisterial oversight to rein this in. What is worse, under the commissionerate system, police officers (in major cities and towns) themselves exercise magisterial powers!

This is repugnant to the concept of separation of powers which is the cornerstone of freedom and democracy and essential for just governance. The sooner this is remedied, the better, lest India becomes a full police-state.