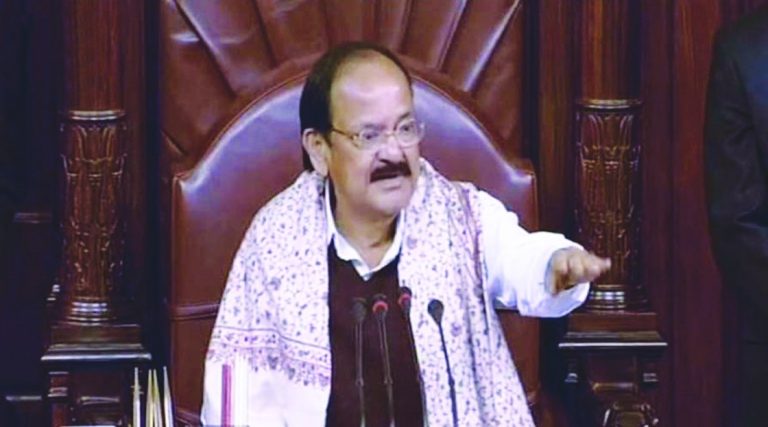 Above: Rajya Sabha Chairman M Venkaiah Naidu has had to pull up members many times for unruly behaviour, causing disruptions

Though there are rules to deal with parliamentary disruptions, Rajya Sabha Chairman M Venkaiah Naidu has called on political parties to put in place a code of conduct for legislators

Order, Order!!! The signature cry of the presiding officers along with the sounding of the gavel are being so increasingly heard in both Houses of Parliament in recent times. Shortly after the monsoon session of the twin Houses ended in mid-August, the Chairman of the Rajya Sabha, M Venkaiah Naidu, exhorted political parties to put in place a “code of conduct” for their legislators, including MPs and MLAs, to ensure that they do not disrupt the proceedings of the House or resort to unruly behaviour, such as sloganeering or entering the well of the House.

That this observation came at the end of a “functional and productive” 249th Session of the Rajya Sabha “with substantially reduced disruptions”, in his own words, is not at all surprising. It is perhaps an expression of anguish and angst accumulated over his two-year tenure or even before. In his valedictory remarks on January 5, 2018, at the end of the 244th Session, his very first after assuming office, Naidu had observed: “It is unfortunate that despite discharging its responsibilities to a great extent, the august House ends up losing some degree of the esteem of the people on account of disruptions and substantial loss of functional time. Intense and passionate submissions and debates are the order of democracy, but disruptions are certainly not.”

The frustration was palpable in the Valedictory Remarks on April 6, 2018, at the end of the 245th Session, when Naidu said: “I am pained to note that it turned out to be an eminently forgettable one on account of utter disregard of the mandate of this important parliamentary institution and its responsibilities and missed opportunities.”

By the end of the 248th Session (February 13, 2019), the travails and tribulations came to a boil: “With a heavy heart, I have to say that this short but important Budget session of Rajya Sabha turned out to be another wasted opportunity. This only reinforces the ‘dysfunctional pattern’ that has been evident over the last few years which is a matter of serious concern and it will be a big challenge to democracy…. So, each one of us must seriously think if we can collectively enhance the quality of debates, discussions and, most importantly, the demeanour…If cacophony and disruptive spectacles become our House’s defining characteristic, we would have betrayed people’s trust in each one of us.”

This saga of disruptions and disturbances is neither peculiar to the Rajya Sabha nor a phenomenon of current origin. In the annual Conferences of Presiding Officers of the Parliament and the State Legislators, spread over more than 25 years, this subject has been discussed and debated, with increasing concern.

In the conference held in Gandhinagar in 1992, the first item on the agenda read: “Disorder and disturbances in the House at the time of Address by President/Governors and measures to curb them.” In Chandigarh (2001), the agenda had expanded and crystallised into:  “Need to evolve a Code of Conduct for legislators and steps to contain frequent adjournment of the legislatures on account of interruptions/disturbances.”  In Thiruvananthapuram (2007) it was even more stringent: “Indiscipline including disregard of Presiding Officers, disturbances, disruptions and other serious acts of misconduct in legislatures—Future strategies to improve the situation.”

Back in Chandigarh (2008), there was no respite: “Need to evolve procedural devices and frame rules to control unruly behaviour of the Members, their entry in the well of the House, obstruction in the business of the House and ensure improved management”. By the time we come full circle to Gandhinagar (2016), the situation is somewhat facetious: “Measures to be taken for ensuring attendance of the Members during the sittings of the House and for improving quality of debate….”

On the occasion of the Golden Jubilee of Independence, political parties represented in Parliament expressed their concern over the breach of discipline and decorum in our legislatures. A resolution was adopted unanimously on September 1, 1997, in the Houses of Parliament whereby the members committed themselves to maintaining the inviolability of Question Hour, to refrain from transgressing into the well of the House or from shouting, and to desist from any effort at interruptions in or interference with the address of the president.

Reverting to the opening exhortation of Naidu, it is interesting to note that more than 27 years ago, the All India Conference of Presiding Officers, Leaders of Parties, Ministers of Parliamentary Affairs, Whips, Parliamentarians and Legislators (a more inclusive congregation of responsible authorities cannot perhaps be imagined) on the topic of “Discipline and Decorum in the Parliament and State Legislatures”, held on September 23-24, 1992, inter alia, resolved “that the political parties [should] evolve a code of conduct for their Legislators and ensure its observance by them”.

Nor is this phenomenon unique. In the 19th Conference of Speakers and Presiding Officers of the Commonwealth held in the United Kingdom (January 2-6, 2008), inter alia, the following discussion papers and documents were presented and deliberated upon:

Thus, across the board, there has been dialogue on the need for a code of conduct to regulate the behaviour of legislators in the House. Moreover, for resolving this perennial problem of disruption of proceedings, there is no dearth of rules and regulations.

A composite reading of the Rules of Procedure and Conduct of Business in the Council of States and the Lok Sabha provides an imaginatively comprehensive list of 23 “Dos” and, mostly, “Don’ts”:

“Whilst the House is sitting, a Member—

(i) shall not read any book, newspaper or letter except in connection with the business of the House;

(ii) shall not interrupt any Member while speaking by disorderly expression or noises or in any other disorderly manner;

(iv) shall not pass between the Chair and any Member who is speaking;

(v) shall not leave the House when the Chairman/Speaker is addressing the House;

(vi) shall always address the Chair;

(vii) shall keep to his usual seat while addressing the House;

(viii) shall maintain silence when not speaking in the House;

(ix) shall not obstruct proceedings, hiss or interrupt and avoid making running commentaries when speeches are being made in the House;

(x) shall not applaud when a stranger enters any of the Galleries, or the Special Box;

(xi) shall not shout slogans in

(xii) shall not sit or stand with back towards the Chair;

(xiii) shall not approach the Chair personally in the House. The Member may send chits to the officers at the Table, if necessary;

(xiv) shall not wear to display badges of any kind in the House (except the National Flag in the form of a lapel pin or a badge);

(xv) shall not bring or display arms in the House;

(xvi) shall not display flags, emblems or any exhibits in the House;

(xvii) shall not leave the House immediately after delivering the speech;

(xviii) shall not distribute within the precincts of Parliament House any literature, questionnaire, pamphlets, press notes, leaflets, etc. not connected with the business of the House;

(xix) shall not place one’s hat/cap on the desk in the House, bring boards in the Chamber for keeping files or for writing purposes, smoke or enter the House with the coat hanging on the arms;

(xx) shall not carry walking stick into the House unless permitted by the Speaker on health grounds;

(xxi) shall not tear up documents in the House in protest;

(xxii) shall not bring or play cassette or tape recorder in the House; and

(xxiii) shall avoid talking or laughing in Lobby loud enough to be heard in the House.”

These are further buttressed by listing of “Parliamentary Customs and Conventions”, and “Parliamentary Etiquette”, in the Handbooks for Members, issued separately by the Rajya Sabha and the Lok Sabha. Rajya Sabha lists 14 customs and conventions, and 42 items of etiquette. The figures for the Lok Sabha are 24, and 47, respectively. There are also rulings and observations from the Chair on the topic of “Decorum and Dignity”, culled from the debates and discussions in the Houses. Further, there are provisions relating to withdrawal and suspension of the Members, including “automatic suspension” (for coming to the well of the House), in case of non-compliance.

So how is it that the saga of disruptions and interruptions continues unabated? The members argue that it is done for “strategic” reasons. The presiding officers have practical difficulties in implementing the rules. If one or two members create disorder, they can be named by the Chairman or Speaker for suspension. However, suspending a sizeable number of members for wilfully obstructing the proceedings of the House or abusing its rules is not possible because suspending a large number of members may compromise the principle of participative democracy and cast doubt on the legitimacy of the debate. A presiding officer would, therefore, be hesitant to invoke the rules.

Om Birla, the Speaker of the Lok Sabha, in a recent interview said: “The rule books will not be enough, rather behavioural changes will be more effective.” On August 28, 2019, at the conclusion of the meeting of the Executive Committee of the Commonwealth Parliamentary Association (India Region), he announced the constitution of a committee of Presiding Officers to draft a common Code of Conduct for legislative bodies to check interruptions. Perhaps self-regulation is the only solution.

An image from a video that remains etched in memory shows citizens climbing on top of the parliament building of a particular country to protest against its “dysfunctional pattern”. Hopefully, we will never reach that stage.