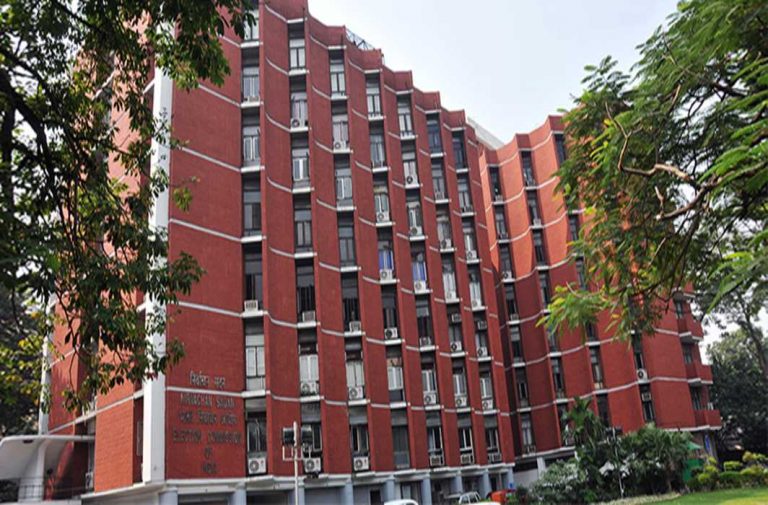 Above: The Election Commission of India building in New Delhi

~By Sujit Bhar and Rajesh Kumar

The NDA government’s efforts at politicising all important constitutional posts, has come in for scathing criticism from the Supreme Court. The judiciary, itself in a spot from its long tussle with the executive about the sanctity of the collegium, understands the importance of neutrality in a democracy. So, while replying to a PIL regarding setting up a similar collegium or framing a new law for appointing election commissioners, the apex court has warned the Central government to either make a law or risk judicial intervention.

A petition, filed by Anoop Barnwal, has complained that the election commissioners of India are becoming political appointees and are not appointed as independent persons as per the Constitution which says that a law should be framed by Parliament for the same. The PIL, argued by senior advocate Prashant Bhushan found a like-minded bench of Chief Justice JS Khehar and Justice DY Chandrachud which, on July 5, minced no words in telling the Union government that the EC should have people who are neutral to all political parties.

The procedure, in the absence of such a law is that the President appoints the election commissioners on the advice of the Prime Minister and his council of ministers. Incidentally, that was exactly what the authors of India’s Constitution did not want. In specifying that a law be made for such an appointment it was expected that this would be yet another constitutionally independent body, strong enough to stand up to covert and overt political pressures.

Neither the Congress, in its decades of rule, nor any other party did ever pay any heed to the inherent independence of the EC, before the 10th Chief Election Commissioner (CEC), TN Seshan, took things in his hand in December 1990 and used all powers vested in him by the constitution to create a body that was devoid of outside influence.

So strong and independent was his presence that on his departure from the scene in December 1996, the overall power of the EC was immediately divided between more election commissioners. The policy worked. While Seshan left a strong system of checks and balances, subsequent CECs have not been able to stand up to political pressures, with many allegedly toeing political lines.

It was interesting to watch the Supreme Court’s reaction when Solicitor General Ranjit Kumar argued that if Parliament has not framed a law (to select election commissioners) then Parliament is not in breach for that, pointing out that till such time that Parliament does not think it appropriate to frame a law the Chief Election Commissioner and other commissioners will be appointed by the Prime Minister and President of the country.

The court wasted no time in pointing out to the Solicitor General that the President has nothing to do in these appointments. Only the council of ministers and the Prime Minister have a say. That is how the matter stands today on the ground. And that is what the petition seeks to change and the Supreme Court concurs with it.

While there was no apparent connection between the two events, even as the PIL was being heard by the apex court, the incumbent CEC, Nasim Zaidi, retired. Then an interesting thing happened. In his place came the man next in seniority, Aachal Joti. While this appointment was by the book, one cannot fail to notice two rather interesting traits of the new CEC.

First, he is of the Gujarat cadre, and a former chief secretary of that state, and secondly, he had just six months left before retirement as he took over the reins as CEC. Again, there isn’t anything irregular or illegal about that either but it does raise eyebrows.

The Centre’s reply to the Supreme Court bench was as expected. It said that competent people have been appointed in a timely manner. The court was not happy with the reply. It pointed out that the brief affidavit, that too submitted by an official as junior as a deputy secretary, “is not expected by this court” in such an important matter.

While what the affidavit said was true, what the petitioner is saying is also true. The PIL wants the constitution of a committee comprising the Leader of the Opposition and the Chief Justice of India for appointment of election commissioners. It may be recalled that other “autonomous” bodies of the country, such as the CBI and the Lok Adalat have similar selection committees. The prime minister is also part of that committee in these cases. In fact, it is the absence of a formal Leader of the Opposition (with the Congress’ strength being less than the requisite 10 percent in parliament) that has held up the formation of a Lok Adalat and the appointment of Lok Pal. This is what the apex court pounced on when it said: “If there is a formal law and panel to select the CBI chief then why not for CEC and ECs?”

Keeping this in mind, the Supreme Court has told the central government that if Parliament does not make a requisite law, the issue will be taken up judicially. The matter comes up for hearing again in two months and the court expects the government to have an answer ready by then.