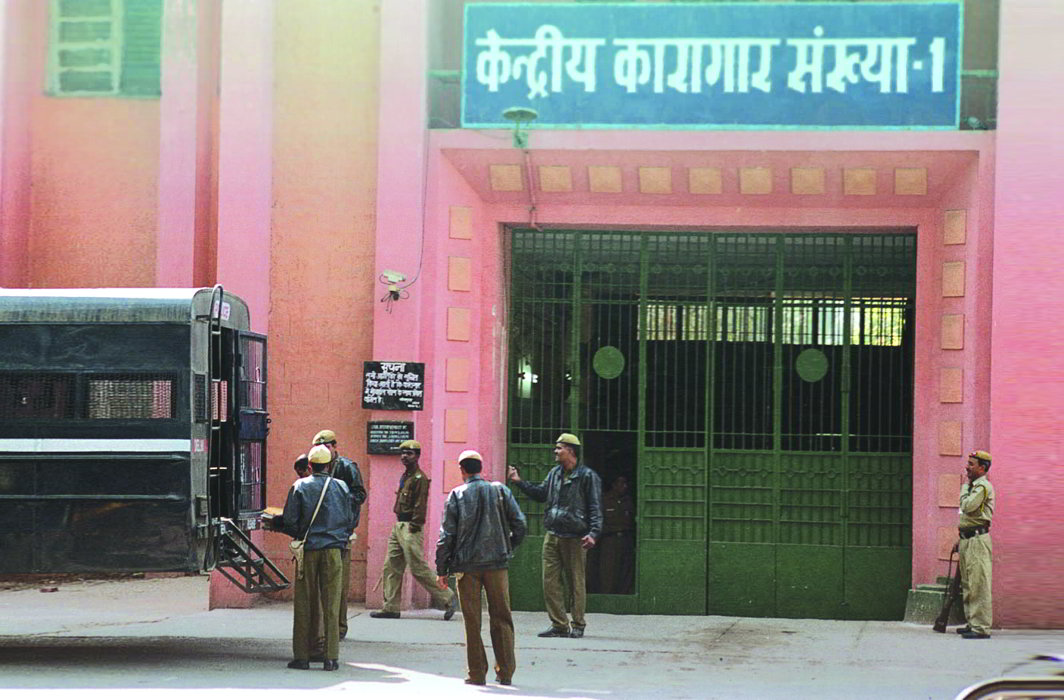 Above: The entrance to Central Jail No. 1 of Tihar Prisons. Photo: Rajeev Tyagi

The brutal beating of some prisoners in high-security Tihar Jail recently has opened a can of worms. Who were these convicts? What provoked the prison police to beat them so mercilessly? Exclusive details obtained by India Legal separate fact from fiction

A case has been filed in the Delhi High Court containing serious allegations against jail staff and security personnel inside Asia’s largest and India’s only super-security and VIP jail, Tihar, for mercilessly beating up some under-trial inmates on two days in September and November. The application, made under Article 226 of the constitution, read with Section 482 CrPC, seeks “issuance of urgent interim directions for the protection of the life and limb of the petitioner (an inmate going by the name Jamal, alias Ranjha) and certain other inmates inside the prison”.

The incidents described in the petition—on September 13 in Central jail (CJ) No. 3 and on November 21 in Central Jail No. 1—have started a huge debate in the media and elsewhere as to the reason behind the beating of in­mates and on whether the security personnel of Tihar Jail behaved highhandedly, going against all that is laid down in jail manuals.  The incidents have opened a can of worms with many even commenting that Indian jails, even the super special jail complex of Tihar, are way below standards, compared to international jails and hence should no more be called centres for reformation.

“That acting upon the instant petition and the two connected petitions… this Hon’ble Court, vide its order dated October 13, 2017, had directed the respondents [which is NCT of Delhi in the main] to conduct a fair inquiry into the incident and submit the report. The report submitted by the respondents indicated, inter alia, that a majority of the CCTV cameras were dysfunctional at the relevant time, wherefore, no scientific evidence as to the incident of assault exists. This Hon’ble Court has taken serious note of the same and has directed the Union of India [the ministry of home affairs specifically] to constitute a high-level committee to look into the matter.”

The petition goes on to give details of the incident (see box) and complains of the “highhandedness of the prison administration”, while expressing concerns about the “safety of prisoners”. It says that “such incidents of brutal and indiscriminate violence against the inmates at the hands of the prison staff and the Tamil Nadu Police is continuing unabated.”

The court had asked the MHA to institute an inquiry, and on November 30, had dismissed the Delhi government standing counsel’s insistence that the situation was being handled on the administrative side (the jail is within the purview of the Delhi government, though it’s special security staff, the Tamil Nadu Special Police, is under the MHA), and ordered that the investigation report was ground enough to lodge an FIR.

Within the tense atmosphere of the jail today, the truth is somewhat different. According to a reliable source, conversant with the goings-on inside the jail, India Legal learns that some of the inmates of the High Risk Ward (HRW) of Central Jail 1 (in the November 21 incident) had initiated the trouble during a regulation search by Tamil Nadu Special Police (TSP) and jail staff (see box on security system in the jail) for smuggled cell phones and SIM cards. These are inmates who are allegedly either members of the dreaded Lashkar-e-Taiba and/or IS activists and operatives as well as feared gangsters.

There is an official version also available to India Legal on the incident. This says: “Pillow covers (as also curtains) are banned inside jails because they are used to hide smuggled goods. The security personnel were collecting the pillow covers. As per instructions of prison officials, such ward searches were being conducted twice a day. Recently, during the search of the HRW of CJ-1, four mobile phones were recovered from the inmates of the HRW.

“Information was passed to the CJ-1 superintendent that the inmates of the HRW were using the pillow covers to hide prohibited articles, such as mobile phones, SIM cards, etc. On the instruction of the CJ-1 superintendent, during the ward searches, pillow covers were removed from, A, B, D E and G blocks.  These inmates cooperated with the search team. However, while confiscating the pillow covers seized from C and F blocks, the inmates of C and F blocks not only objected but started a scuffle with TSP officers and personnel. They shouted anti-national slogans (‘Pakistan zindabad’).

The complaint in the petition is as follows:

“It is submitted that around 9 pm on November 21, 2017, the alarms were falsely set off at Central Jail No. 1 and almost all the inmates of Block C and Block F of the High Risk Ward therein were brutally assaulted by Tamil Nadu Police and Prison Officials, continuously for more than one hour. An indicative list of the inmates who were assaulted and have sustained grievous injuries is as follows:

To the knowledge of the petitioner, Asadullah Rehman has been so brutally beaten up that there has been dislocation of the forelimbs. Others who have sustained injuries include, Imran, s/o Moazzam; ­Sohail Ahmad, s/o Umar Farooque; Md Sharif Moinuddin; Obadullah Khan; Sameer, s/o Mufeez Ahmed and Farhan, s/o Rafique. It is submitted that the assault was led by Muthupandi, Chandrasekhar, P Raja, Kalakesh, Gunaselvam, P Kumar and R Suresh Kumar of the Tamil Nadu Police.

“The above stated victims had recently lodged their complaint before the prison authorities against the Tamil Nadu Police for continuous harassment.”

“The inmates of C and F blocks, specifically (i) Irfan, s/o Mirajuddin and (ii) Afsar, s/o Mohd Yusuf (iii) Ashutosh, s/o Dinanath, and (iv) Shoukar, alias Ashabuddin, s/o Abdul Hai, are known gang leaders, operating in outer Delhi and UP. The other inmates, such as Gulam Mohd and others, are the terrorists belonging to Lashkar–e-Taiba.

“The inmates of C and F blocks then started using filthy language, poured water on the TSP team and started scuffles. Moreover, one of the TSP officials was forcibly being pulled in to the cell despite warnings issued by Assistant Superintendent (AS) Bijender Kumar Gundu and TSP SI Muthupandi. They  refused to go inside their respective cells. Instead they gathered and started roaming in the verandah, where they collectively attacked the physically challenged duty TSP Officer SI Muthu­pandi and other TSP personnel. The TSP team along with the AS suspected that they might indulge in further unlawful activities on the spot and create a panic situation just like the recent incidents at Acapulco Prison in Mexico on July 6, 2017, in which 28 inmates lost their lives and several escaped and the chaos at Manaus, Brazil, on January 2, 2017, whereby taking 12 prison guards as hostage, almost 126 prisoners escaped and 56 lost their lives. To avoid such an untoward situation, the TSP personnel along with the Quick Response Team, who came after the siren was blown, used “minimum force” to keep all inmates inside the block.

“Assistant Commandant M Selvamani and Inspector Sreekumar arrived on the spot and got inside the HRW along with the Deputy Superintendent and evacuated the cell. First aid was administered  by the duty doctor of CJ-1 to the affected TSP personnel and in­mates who were then referred to the Deen Dayal Upadhyay Hospital for further treatment.

“The commandant of TSP has ordered the suspension of SI Muthupandi and five others for procedural lapses made during the search and a request has been made to the prison authority for taking suitable action against the miscreants/inmates of CJ-1 HRW.

The official version explains how the situation had gone completely out of control. And while the jail authorities do accept that there were lapses in the action as far as procedure was concerned, it was also quite evident that it was the lives of the security personnel that were under threat from the dreaded gangsters.

Since 1980, the premises have been under the watch of Tamil Nadu Police

Hence its security system is also very different from other jails. The jail is basically divided into two sections, comprising the general wards and the high security wards or High Risk Wards. It is manned overall by jail staff. They are under the government of Delhi. Security of the general wards is handled by the jail staff.

However, beyond that, starting from the main gate where security frisking is conducted for incoming/transferee inmates and for visitors, Tamil Nadu Special Police (TSP) has been at work, pretty effectively from 1980. TSP in Tihar has always been headed by an IPS officer of the rank of Superintendent of Police /Commandant. At present, a senior superintendent of police-ranked IPS officer, Abhishek Dixit, is heading the force. TSP is also responsible for security within the HRW. They are helped by jail staff.

The hierarchy is a bit complicated. While the jail overall is under a Director General of Police (under the MHA, the incumbent at that post being Ajay Kashyap, IPS), the jail staff is under the state government. However, even at the HRW, a jail superintendent is at the helm who is also under the state government. TSP operates under the superintendent, though they are assisted by the jail staff. According to security sources inside the jail, this has created no problem in so far as command structure is concerned.

Why was TSP assigned this special task? Initially there was another force handling this, with personnel having good knowledge of Hindi. According to the source, this created a clique between inmates (who are mostly from northern India) and some corrupt security staff, with material such as phones, SIM cards, food and even valuables and drugs arriving with ease inside. TSP personnel know no Hindi, hence this communication route is cut off.

TSP personnel have been quite successful in preventing the smuggling of contraband inside Tihar. In the current year till September they have seized 904 contraband items, such as 41 mobile phones, 78 SIM cards, nine surgical blades, 102 improvised iron weapons, about 4 kg of narcotics, Rs 2.5 lakh in cash. TSP officers often claim that due to their effective searching and frisking, they become obvious targets as far as complaints from inmates are concerned.

The other curious issue is of non-functional CCTV cameras. While the November 21 incident had video footage (submitted to the court), many incidents of inmate trouble aren’t, simply because the cameras do not work. India Legal’s source provided the reason.

“Most of the wiring in the jails, connecting the CCTV cameras, are not in the nature of concealed wiring. Hence the wires hang loose and jail inmates regularly snip these wires to disable the cameras. This is not an unknown situation for jail authorities, but since the CCTV cameras are handled by the jail authorities, this differentiated command structure means that repairs aren’t carried out in time,” said the highly-placed source.