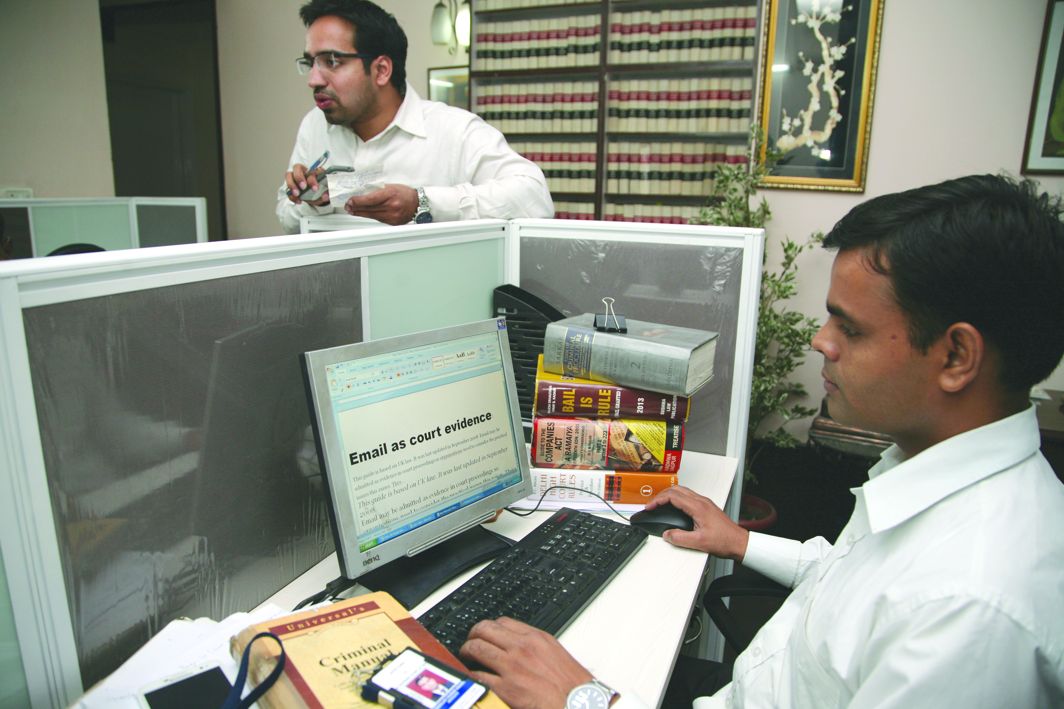 By Mukul Gupta and Diljeet Titus

Legal services were first brought under the ambit of indirect tax through the Finance Act, 2009, with the aim to extend the regime of indirect tax to all spheres of economic activity. This Act imposed service tax on legal services under the new taxable category of “legal consultancy services”. While appearances before courts, tribunals and other adjudicating authorities were kept outside the taxable category in the 2009 Act, services by way of representation before judicial authorities were brought within the tax net by the Finance Act, 2011.

In 2012, the service tax law underwent a significant change by moving to a negative list-based regime, where except for certain specified services, the remainder were brought within the tax net.

Along with the introduction of the Negative List Regime in 2012, the government provided for specific exemption for “legal services provided by an individual advocate or a partnership firm of advocates to a certain class of people”. However, in the circumstances or condition where there was no exemption, the liability of paying service tax was imposed on a “reverse charge basis” i.e. liability was upon the service recipient/client.

Given the foregoing, in general, advocates and law firms did not obtain registration under the erstwhile service tax laws.

Against this background, let us now understand the treatment accorded under the GST regime to services rendered by the legal fraternity. The Central Goods and Service Tax Act, 2017 (CGST Act) along with other GST legislations has been enacted to subsume all indirect taxes into a single levy. Section 7 of the CGST Act deals with charging where the expression “supply” has been deemed to include all forms of supply of goods or services or both for a consideration and in furtherance of a business.

With powers vested under Article 279A of the constitution, the GST Council finalised its recommendations on GST rates for services, including exemptions to be carried forward from the previous regime.

The government has also maintained status quo for individual advocates/firm of advocates, prescribing 100 percent reverse charge mechanism in case of legal services rendered (subject to exemptions), i.e. the entire tax burden is to be borne by the service recipient/client.

The GST that was unravelled by the government on July 1, 2017, has undergone many changes in the past seven months. First, the GST Network was not fully operational. This necessitated many business processes like registration, payment, invoice formats and return formats to be modified. It led to chaos as the system developed glitches, and taxpayers couldn’t interact with GST Net. 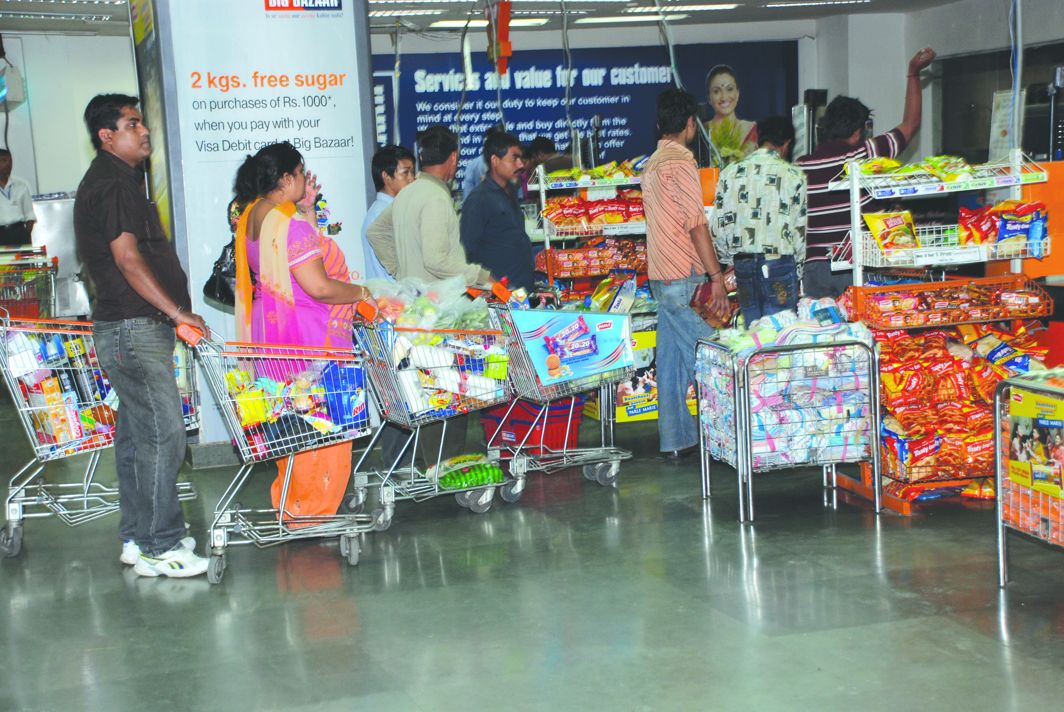 Additionally, taxpayers were not able to upload invoices and file returns because of IT glitches. Certain processes were made off-line and a new simplified return GSTR3B was evolved. The scheme of invoice-matching for ensuring compliance was also postponed.

Then, many transitional provisions in respect of availability of Input Tax Credit were further liberalized. In addition, the threshold for composition levy scheme was increased at two stages from Rs 50 lakh per annum to Rs 1 crore.  These apart, the E-Way Bill meant for transportation of goods, which was kept in abeyance because of reservations from trade was implemented on February 1. Industry apprehended disruption in the logistics sector as an impact of this. Their apprehension came true. The system crashed on the first day, and it has been deferred again.

Finally, the list of items in different slabs of GST rates have been changed at various stages of implementation.

One may say that so many changes in the course of seven months show the keenness of the government to listen to the voices of trade. But others argue that the government was not prepared for GST on July 1, 2017, and there were wrong policy decisions at the initial stages of implementation.

—By Sumit Dutt Majumder, ex-chairman, Central Board of Excise and Customs

The placing of advocates and law firms under the “Reverse Charge Mechanism” now adds to their cost structure as such professionals would not be able to claim Input Tax Credit on the input supply of goods and/or service and the tax paid at the time of procurement, which is not the case with other service providers/consultants. 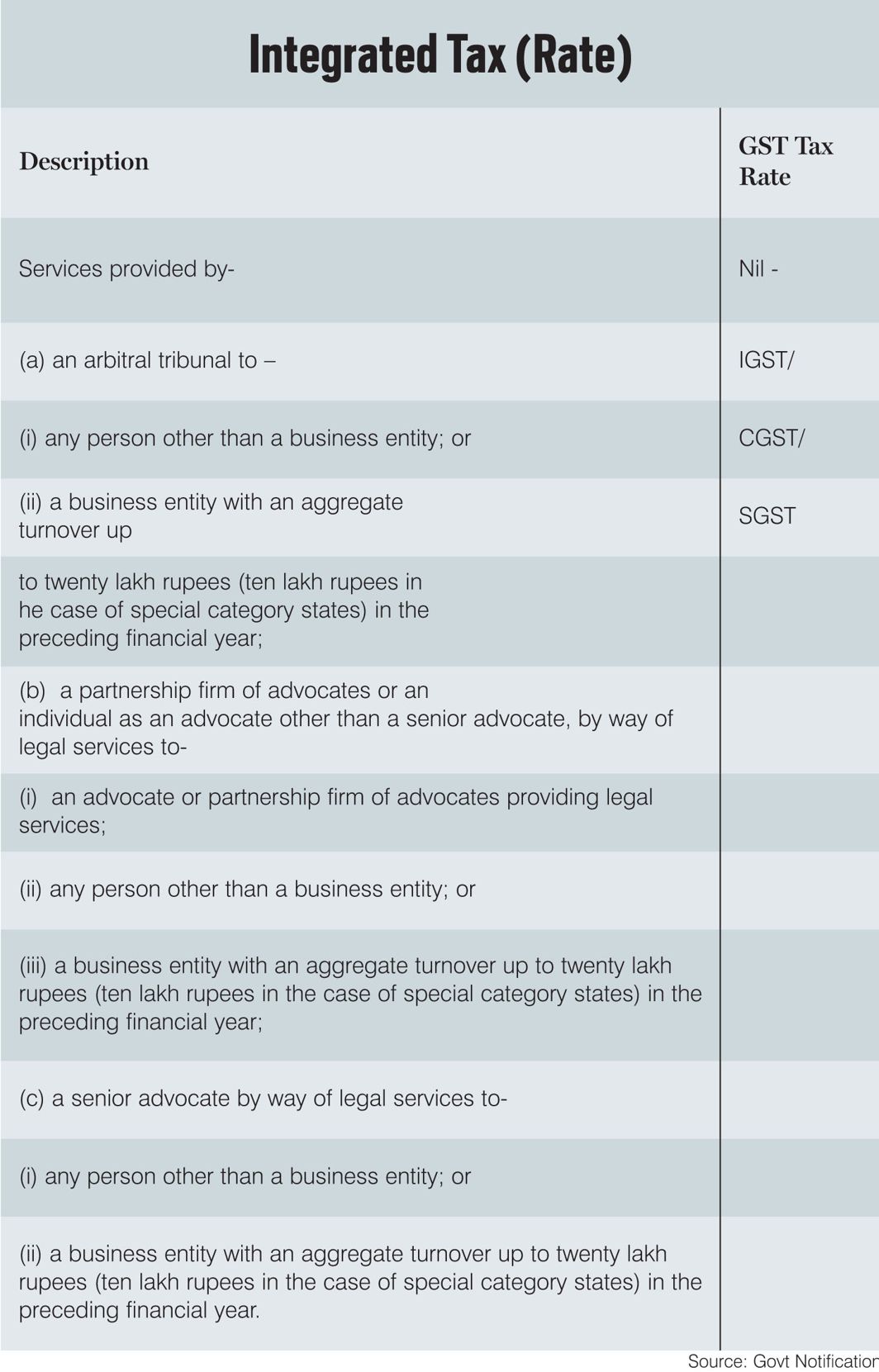 Further, in accordance with Notification No. 10/2017-Integrated Tax (Rate) dated June 28, 2017, and the corresponding notifications under the CGST Act as well as SGST Act, the services specified below are covered under the Reverse Charge Mechanism, meaning that the recipient of the service who is making payment to an individual advocate or to a firm of advocates has the responsibility of paying GST. (See box “Services under reverse charge mechanism”.)

Section 2 (sly) of GST Law: “legal service” means any service provided in relation to advice, consultancy or assistance in any branch of law, in any manner and includes representational services before any court, tribunal or authority.

However, the requirement of registration needs to be reviewed in cases where a law firm provides legal services outside India and receives consideration in foreign exchange in India.

“Lawyers don’t have to pay GST”

The decision to apply GST on legal services offered by advocates and law firms has undergone many variations. With the legal fraternity vouching for reverse charge mechanism and the public already bearing the exorbitant costs of litigation, the end result is yet to be seen. Chartered accountant ASHOK GOYAL speaks to LILLY PAUL about the current situation:

As per the GST Council’s decision, legal services are taxable under the reverse charge mechanism, whereas the centre and the Delhi government notified lawyers and law firms to pay the taxes. How is it being dealt with presently?

The reverse charge mechanism was implemented but it is not applicable right now because after protests, it was put on hold till March 31. No tax is being levied right now. It will be applicable from April 1. Earlier, lawyers were given special consideration and were exempted from paying taxes. But what happened was that those who were exempted from paying the taxes for their services remained exempted, but those who were buying their services, were charged GST instead. 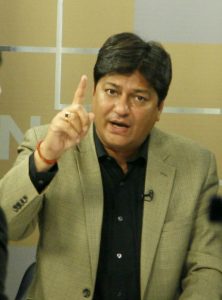 Lawyers had to register under GST. Did they do so?

Whether a lawyer is practicing in a firm or in his individual capacity, he has to get himself registered under GST. But right now, lawyers do not have to register under GST.

Do lawyers have to pay professional tax?

No professional tax is to be paid as all taxes are clubbed into one.

Does the rule of reverse charge mechanism apply to lawyers who don’t work in law firms but provide legal services to an organisation?

Considering the high cost of litigation, will not making people pay for legal services affect the system adversely?

Legal services are like any other services and people should not have any problem in paying GST. While taking services from any other professionals like chartered accountants, it is the service recipients who pay, so why it should be any different for legal services?

—The writers are advocates in Titus & Co.