Above: As President, Ram Nath Kovind will be entitled to an official residence free of cost, a salary of Rs 1.5 lakh free of taxes and will enjoy all constitutional privileges. Photo: PIB

The highest office in the country has often had incumbents with an independent way of thinking. Will Ram Nath Kovind kowtow to the present government or strike out on his own?

Finally, the constitutional battle between the government and the Opposition for the election of the President has come to an end and Ram Nath Kovind, the second Dalit President, has emerged as the 14th President of India. He will be entitled to an official residence free of cost, a salary of Rs 1.5 lakh free of taxes and enjoy all constitutional privileges. But the path to the election of a President is not easy.

The procedure for electing the President is laid down in Article 55 of the constitution. It is unique and original in the sense that no other constitution in the world has this procedure. The President is the first citizen of India and this post is considered the highest in the country. Although India is one of the largest democracies in the world, interestingly, this first citizen is not elected directly by the people. Constitution makers were in great dilemma as to whether the President should be elected directly by the people. Ultimately, they resorted to indirect election so that the real power resides with the ministers and not the President as such. There was a fear that a directly elected President may emerge as a centre of power in future.

He is elected by an electoral college consisting of all the elected members of both the Houses of Parliament and elected members of the legislative assemblies of states. Article 53(3) of the constitution lays down that the election shall be done in accordance with the system of proportional representation by means of single transferable votes by secret ballot. 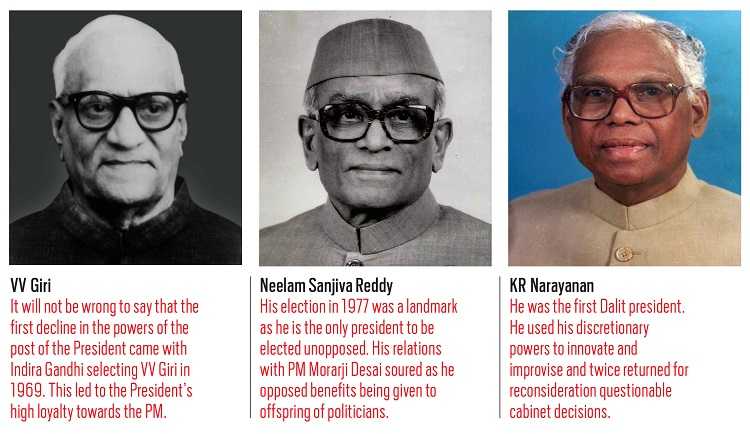 Votes casted by the members of the Electoral College are not of equal value and it is apportioned amongst them according to two principles:

*Article 55(2)(a) lays down the formula for achieving uniformity in the scale of representation of different states in the presidential election. For example, in state assemblies, each legislative member’s vote is calculated as follows: the population of the state is divided by the number of elected members of that assembly and then divided by 1,000.  And if the remainder in this division is 500 or more, then it will be counted as 1 and each member’s vote will be increased by 1.

At the time of voting, each voter gets a ballot paper with the names of the candidates. MLAs get a pink ballot paper and MPs, green. Voters mark preferences for each candidate. The winning candidate has to acquire one vote more than 50 percent of the total votes cast.

India has a parliamentary form of government. This means that the head of the state is the constitutional head, ie, the President. Though the executive powers are bestowed with the President, the same is exercised by the President on the aid and advice of the council of ministers.

The same practice was followed by Dr Sarvapalli Radhakrishnan. On many occasions, he had criticised the working of the government but acted as a strong pillar during the war with China in 1962 and Pakistan in 1965. He even criticised Nehru’s China policy.

It will not be wrong to say that the first decline in the powers of the post of the President came in 1969 with Indira Gandhi selecting VV Giri as a presidential candidate. Against all opposition, she kept supporting Giri who was an independent candidate, instead of Neelam Sanjiva Reddy because he was the choice of the Syndicate (a rebel Congress grouping). The only purpose was to establish her sole authority within the Congress. This led to President Giri’s high loyalty towards the PM.

The impact of the influence of the PM on a President was also evident when President Fakhruddin Ali Ahmed signed the Emergency order in 1975. By this time, the discretionary powers of the President were curtailed almost completely by the 42nd and 44th Amendment of the constitution.

Neelam Sanjiva Reddy’s election as President in 1977 was a landmark as he is the only president elected unopposed. His relation with PM Morarji Desai soured as he opposed benefits being given to offspring of politicians. He also formulated the appointment of PM with the condition that in case of any doubt about the PM’s power to enjoy majority, he would be asked to prove it.

However, if the President is a well-educated and scholarly person and is independent, this office can achieve a different dimension. During the tenure of KR Narayanan, the first Dalit president, he used his discretionary powers to innovate and improvise and twice returned for reconsideration questionable cabinet decisions. In other words, he was never a “rubber stamp” figure. During the communal riots of Gujarat in March 2002, he said with anguish that it was a “grave crisis of society and the nation”.

President APJ Abdul Kalam, a Muslim and the first bachelor President, also known as the people’s President, too asserted his rights. He not only refused to sign the Office of Profit Bill but sent it back to the PM, Speaker of the Lok Sabha and chairman of the Rajya Sabha.

Another chapter has begun with President Kovind’s appointment. It will be interesting to see if he will represent all those “sweating it out (for) their evening meals”.