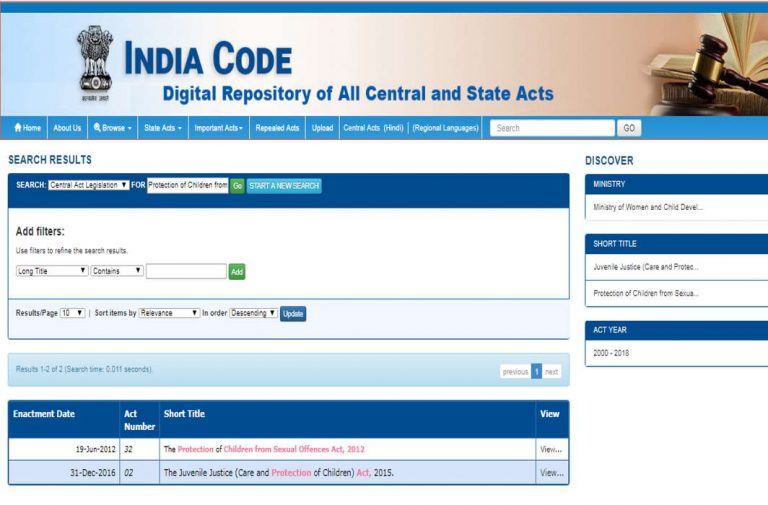 India Code Website, which will be a digital version of all central and state laws, is an important first step in ensuring legal empowerment of all citizens

Ignorantia juris non excusat (ignorance of law is not an excuse) is a fundamental principle of Indian legal jurisprudence. A natural corollary of this principle is that the State is duty-bound to provide legal information, including transcripts of all laws, to its citizens. However, an easy-to-use and free-of-cost public resource providing the full ambit of legal information has been conspicuously ab­sent till now. Only a handful of privately-run online databases provide limited information such as legislative transcripts and case laws for a subscription fee.

Consequently, an ordinary citizen had to expend huge effort to find complete and authentic versions of laws. While this has been a failing in our legal system, after much delay, things are finally set to change. The legislative department, which works under the aegis of the ministry of law and justice, has launched a mammoth exercise to create a single-point digital repository of all existing central and state laws and their respective amendments, regulations, notifications and circulars. The portal is called indiacode.nic.in and has been developed by the National Informatics Centre.

This initiative largely owes its genesis to Vansh Sharad Gupta, a former law student of National Law School of India University (NLS), Bangalore. In 2012, Gupta, a second-year law student, had filed an RTI application with the Central Information Commission (CIC) after he failed to find a legible version of the Indian Christian Marriage Act, 1872, on the India Code website. This website, incidentally, has existed since the mid-1990s, but became defunct soon after. Gupta had first tried to contact the legislative department, but after his emails bounced, he filed a complaint before the CIC in 2015. In a significant order, the CIC issued three directions to the legislative department: (1) complete the process of updating the website on an urgent basis and allocate more funds and employ more personnel for the process; (2) examine the functionality of the email addresses of its officials; (3) develop an appropriate RTI filing and response system. The CIC also asked the legislative department to pay a token compensation amount of Rs 10,000 to NLS, Bangalore, for the inconvenience suffered by Gupta and other students.

Referring to Section 4(1)(a) of the Right to Information Act (RTI Act), 2005, the CIC noted that the State has a duty to inform citizens about laws and this duty not only arises under the RTI Act but is a “constitutional mandate, a legal necessity, and an essential requirement for peace”. Section 4(1)(a) of the RTI Act requires every public authority to maintain all its records in a duly catalogued and indexed manner which facilitates the right to information under the Act and ensure that all records are computerised and connected through a country-wide network so that access to such records is facilitated. The CIC also recognised that access to law is not just a requirement of law students and law researchers, but a necessity for all citizens. It further observed that the lack of access would result in two major problems: (1) people will be kept in the dark about their laws; and (2) private publishers will exploit this situation to make money by publishing updated laws as their copyrighted work.

Following the CIC order, the legislative department filed an appeal before the Delhi High Court. In its 2016 judgment, the Court upheld the CIC’s order and confirmed its stand that the RTI Act itself mandates the government to place the transcripts of all laws in the public domain. The High Court also indicted the legislative department for choosing to appeal against the CIC’s order and observed: “Public can be expected to follow the law only if law is easily accessible at the ‘click of a button’… It is unfortunate that the petitioner did not take the initiative on its own to upload the latest amended bare acts.”

Realising the importance of the matter, the High Court appointed senior advocate Jayant Bhushan as amicus curiae to assist with framing of appropriate directions to ensure that the India Code website serves its intended purpose. On the basis of Bhushan’s inputs, the Court directed the legislative department to ensure that the India Code website inter alia incorporates the following elements: (1) all central and state Acts, rules, regulations, notifications, circulars should be made available; (2) the data should be available in machine readable PDF format; (3) the website should be mobile-viewing friendly; (4) navigation on the website should be such that the complete law-making process, from the parent act to the subordinate legislation, is clearly visible; (5) all ministries and departments must have a nodal officer for this exercise.

Following this order, the legislative department has been working in close coordination with state law departments and other statutory and public authorities to collate the data and publish it on the India Code website. As of now, all central acts and their corresponding rules and amendments have been published and the second phase which involves updating state acts is now under way. So far, the laws enacted by Gujarat, Haryana and the Andaman and Nicobar Islands have been published. The website also carries an instruction manual to facilitate user experience. SK Chitkara, deputy secretary, legislative department, told India Legal that plans are in the offing to make the transcripts of all laws available in other Indian languages, starting with Hindi. The portal’s mobile version is also in the process of being developed. Chitkara added that the development of the website is a continuous process and it’s difficult to indicate a date by when this would be completed.

Venkatesh Nayak of the Common­wealth Human Rights Initiative (CHRI) told India Legal that the India Code website is a good initiative, but it is unfortunate that for many central laws, the legislative department has published retyped versions instead of their original gazette notifications. He said: “This approach has resulted in typographical errors in some texts like the RTI Act. Such issues could undermine the effectiveness of this exercise and create confusion. The real test here is whether the website can ensure that authentic versions are available for users—citizens who are expected to follow laws and government officers who are responsible for implementing them.”

Even 70 years after Independence, access to law remains a formidable challenge for many Indians. And not having access to law also hinders access to justice. Viewed against this backdrop, the India Code website is an important first step by the government in ensuring legal empowerment to all citizens and achieving the “Digital India” dream.