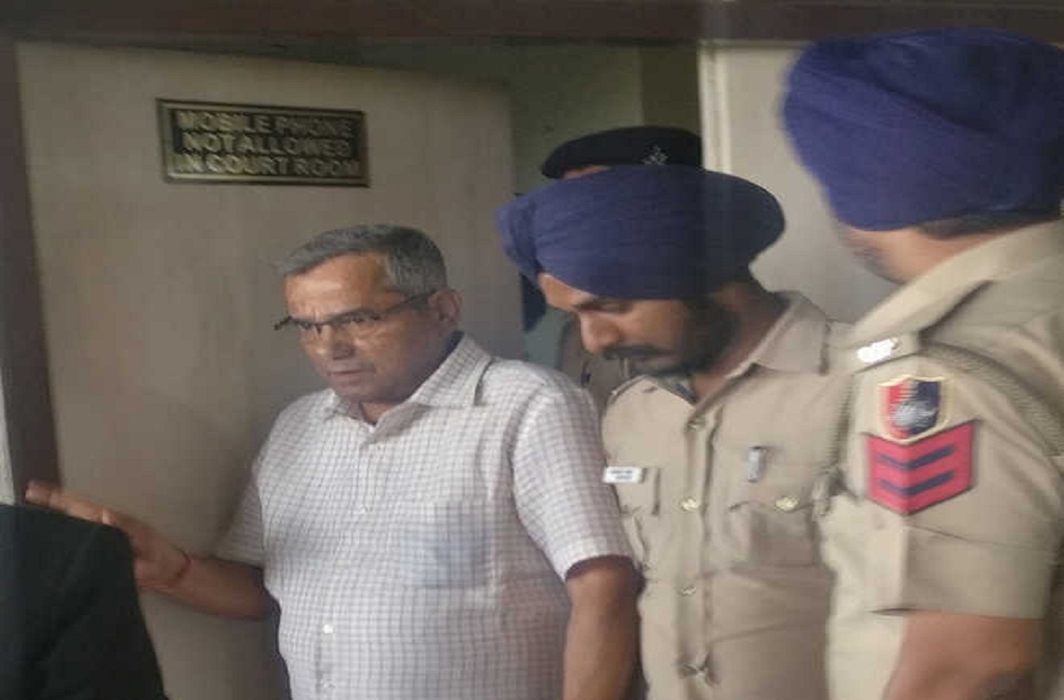 Above: BSF Deputy Inspector General KC Padhi is one of those convicted

Though five men got 10 years for the shocking rape and prostitution of a minor in 2006 J&K Sex Scandal case, two were acquitted

A dozen years before the horrendous Kathua rape case, where the trial was shifted to Pathankot in Punjab, another rape and prostitution case was reported from Kashmir Valley and the Supreme Court had intervened to shift the trial to a special court in Chandigarh.

Among the 56 accused in the case were two former ministers, senior bureaucrats, police officers, leading law officers and prominent businessmen of Kashmir. The case not only hit the national headlines for months together, but led to the resignation three years later of then J&K chief minister Omar Abdullah. He withdrew it the next day only after then governor NN Vohra rejected the resignation and gave an assurance that he had got the allegations against Omar investigated by the CBI and found no evidence.

The special CBI court in Chandigarh has now found enough evidence to convict five accused under Sections 376 of the Ranbir Penal Code (applicable in the state of J&K), Section 5 of the Immoral Trafficking Prevention Act and Section 67 of the Information Technology Act, among other provisions.

However, additional district and sessions judge, Chandigarh, Gagan Geet Kaur, acquitted two accused—former J&K Additional Advocate General Anil Sethi and businessman Mehrajuddin Malik—by giving them the benefit of the doubt. Incidentally, both the prime accused, Sabeena and her husband Abdul Hamid Bullah, who were charged with sexually abusing minors and running a brothel, died of natural causes during the pendency of the trial.

Initially, a case was registered in Shaheed Gunj police station under the IT Act when CDs containing sexual abuse of a minor girl surfaced. She was recognised by some neighbours who lodged a police complaint through an NGO. It was found that the survivor, then merely 13 years, was lured by Sabeena and her husband and was given a drink laced with some intoxicant. She was then raped by a 35-year-old man and given Rs 500. Subsequently, she was blackmailed and sent to various clients, for which she was given Rs 250 each time.

The survivor, daughter of a plumber and a domestic help, revealed that two or three other girls were similarly subjected to sexual abuse. However, the others declined to be part of the investigation. It was during the questioning of Sabeena that many skeletons tumbled out. She named very influential persons besides “reformed” militants who were offered the minors. The accused included former J&K ministers Ghulam Ahmed Mir and Raman Mattoo, former principal secretary Mohammad Iqbal Khandey and hoteliers Riyad Ahmad Kawa and Hilal Ahmad Shah, who were initially arrested and released on bail.

Subsequently, several witnesses turned hostile and even the survivor failed to recognise some of the accused. She had identified six of the accused in the test identification parade and the seventh, Anil Sethi, through photographs.

The entire Valley witnessed violent incidents with mainstream and separatist groups joining hands to protest against the prostitution racket run in the heart of the city. Two factions of the separatist Hurriyat Conference, led by Mirwaiz Umar Farooq and Syed Ali Shah Geelani, and Asiya Andrabi of the Dukhtaraan-e-Millat and then opposition, the National Conference of Omar Abdullah, joined to condemn the sexual abuse of minors.

However, the Kashmir Bar Association and political groups raised doubts about the credibility of the state government to investigate the racket. Following the huge public and political outrage, then chief minister Ghulam Nabi Azad ordered a CBI inquiry on May 1, 2006, which subsequently came out with an extensive chargesheet. The Jam­mu and Kashmir High Court also took notice of media reports and ordered that the CBI investigation be monitored at the highest level of the state judiciary.

The prosecution and witnesses started getting threatening calls and a lot of pressure was exerted on the latter. This led to many resiling on their statements. It was at that stage that the Supreme Court intervened and ordered that the trial shall take place outside the state in Chandigarh. Three years later, the case came back to haunt then chief minister Omar Abdullah. Some leaders of the People’s Democratic Party alleged in the assembly that Omar was named at serial number 102 in a list of accused prepared by the CBI. He vehemently contested it and was so upset that he drove straight from the assembly to the governor’s residence to tender his resignation till he was cleared of all charges.

Senior security officials detained in connection with the scandal told the CBI that Sabeena’s network was, in fact, a source of information for them about terrorists who visited her brothel in the heart of Old Srinagar.

Subsequently, three of the four survivors turned hostile. Due to the sensitive nature of the case, the trial was kept in camera and victims were referred to in code language. The main survivor, who stood her ground, was kept in the protective custody of the CBI.

CBI prosecutor KP Singh had told the court that the survivor was driven to prostitution due to poverty as she was the eldest among four siblings. He said the “sheer helplessness” of the survivor became more and more evident during the trial of the case. He pointed out that her “repeated references to returning home from the brothel/hotels/guest houses on foot or auto rickshaws further reiterated her poor background”.

In her statement in the court, the survivor said that she was raped by five to six persons and that two of the accused had also made a video film of the act. She said they had been raping her repeatedly under the threat that they would make the video public. Shockingly, even her mother had stood in the witness box—not in her defence—but siding with the defence! This despite the fact that she was listed as a prosecution witness. Apparently, the survivor and her family were under tremendous pressure.

Attempts were made till the very last to force the survivor to change her statement. In a rare instance, both the defence as well as the prosecution approached the High Court seeking permission of re-recording her statement. The Court rejected the plea saying the prosecutrix cannot be recalled once her statement had already been recorded.

Pronouncing the quantum of sentence in a packed courtroom on May 6, judge Gagan Geet Kaur said the convicts deserved no leniency. The court came down heavily on Padhi and Mir, saying such acts could not be expected from those society regarded as its protectors. The court also imposed a fine of Rs 1 lakh each on Padhi and Mir, ordering that they will undergo another year of rigorous imprisonment if they defaulted on its payment. It slapped a fine of Rs 50,000 each on Masood Ahmad, Langoo and Laway, who will serve another six months in prison if they fail to pay.

The amount will be used as compensation for the loss of the victim’s reputation and dignity, mental harm and loss of opportunity of education, the judge said. “A victim of rape inevitably suffers acute trauma. Rape itself brings enormous shame to the victim,” she said.

The court rejected the plea for a lesser sentence for former BSF officer Padhi, who cited factors such as his old age (67 years) and killing 40 militants while being posted in J&K. The defence lawyers said they would approach the High Court for quashing the convictions. However, the fact that the men were convicted proves that the allegations of a prostitution racket flourishing in the heart of Srinagar during the period of militancy were true. Only if the witnesses had resisted pressures and the other survivors stood their ground, there could have been more convictions.