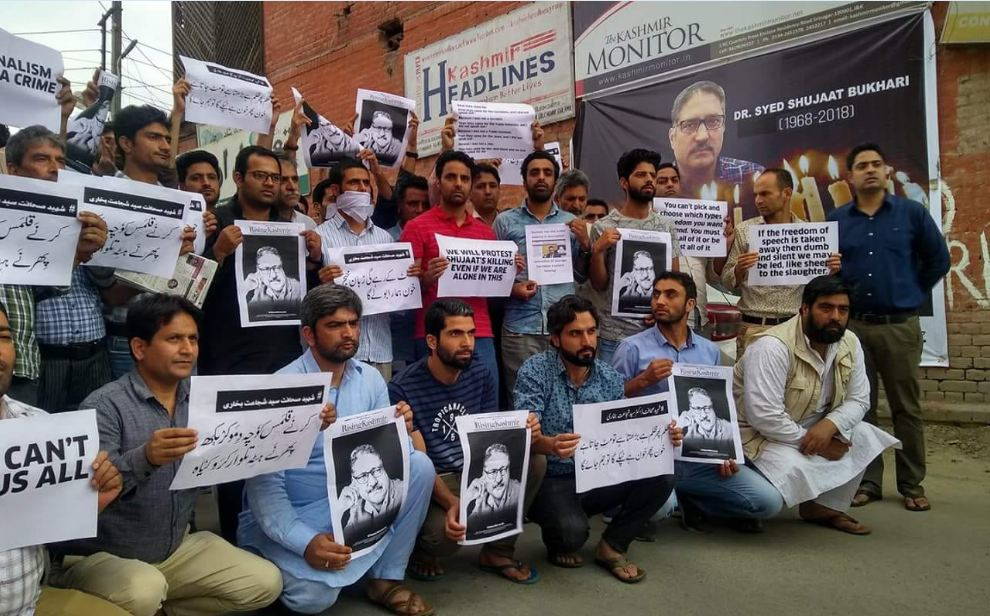 Though the Press Council of India has recommended a special law to protect journalists in this strife-torn state, each of them has to analyse the risk factors himself

On May 11, 2008, photographer Ashok Sodhi of J&K’s leading English newspaper Daily Excelsior set out from Jammu to report on a serious encounter between terrorists and security forces close to the international border (IB) in Samba, 40 km away. The thought that he would not come back was far from his mind. Terrorists had entered the populated areas and there was heavy exchange of fire. Sodhi, diligently clicking pictures not far from the theatre of action, was hit in the head by a bullet and died on the spot.

Daily Excelsior immediately announced a life-long monthly pension of Rs 10,000 for his widow. Monetary help came in from other quarters as well, including the Prime Minister’s Office which contributed `1 lakh.  The newspaper’s gesture for the bereaved family was widely hailed; it was a spectacular first in J&K which remains in the grip of armed militancy.

The Kashmir Editors Guild sent a firmer message in 2018 that it indeed cared for the needy families left to fend for themselves in a conflict situation. It gave Rs 2 lakh to the family of veteran journalist and novelist Maqbool Sahil who died of cardiac arrest while on the job on March 20, 2018, in Srinagar’s busy Lal Bazaar. Mehbooba Mufti, then chief minister, also contributed Rs 5 lakh.

Over the last three decades, about 20 journalists and government media representatives have been killed in J&K—an overwhelming majority in the conflict-torn Valley. The Press Council of India (PCI) has recently carried out a well-intentioned exercise to assess the threat to mediapersons and suggest remedial measures. It is believed to have prepared a report which is being forwarded to governments in Delhi and Srinagar. It has echoed the demands of journalists in J&K that they be provided with bullet-proof vests and helmets, and jackets with “Press” embossed on them. It has very rightly put the onus on media houses to do the needful. It has suggested that the State Working Journalists’ Fund should be reconstituted; all necessary steps taken to nab the killers of Shujaat Bukhari, editor of Rising Kashmir, who was shot dead on June 14; and security arrangements at Srinagar’s Press Enclave, the hub of media activity, be beefed up.

One would like to wait for the official release of the report before passing a comment on at least two of its reported observations. One, that there is a “fear psychosis”, is too general.  For, no local journalist has left the Valley out of panic and many of those who explored new professional avenues in other cities have returned home. Secondly, its suggestion as reported in the media that “the Information and Public Relations Department should convene a meeting of journalists’ unions and reporters to make them aware of the norms of journalistic conduct, especially at the time of conflict reporting” needs elaboration of the term “journalists’ conduct”. A journalist’s sole concern is to report the truth and he has to conduct himself accordingly. This is recognised by global media bodies as well as the Geneva Convention and their Additional Protocols which have expressed concern over the safety of mediapersons in conflict regions.

A PCI recommendation suggests framing a stringent law for the protection of journalists in J&K on the lines of the Maharashtra Media Persons and Media Institutions (Prevention of Violence and Damage or Loss to Property) Act, 2017. The Act has been criticised for having certain sections which overlap with the Indian Penal Code (IPC). J&K does not have the IPC because of its special status under the Indian Constitution. Instead, it has the Ranbir Penal Code (RPC). Can a journalist-specific law bypass the provisions of the RPC and the Armed Forces Special Powers (Jammu and Kashmir) Act, 1990, which is also in vogue in the terror-hit state?

Journalists in J&K have refused to be browbeaten into submission despite targeted killings. These include those of popular Kashmir Doordarshan director Lassa Kaul (February 13, 1990), Mohammad Shaban Vakil, editor of Al Safa (April 23, 1991) and most recently, Syed Shujaat Bukhari (June 14, 2018). Some, like Sodhi, have been caught in crossfire. Maulana Mohammad Sayeed Masoodi, a member of the Indian Constituent Assembly, shot inside his Ganderbal residence on December 13, 1990, when he was in his nineties, too had a journalistic background but it was overshadowed by his high social and political profile.

The selective murders early on did evoke fear. The militants sent a message—either follow them or perish. The names of National Conference patriarch Farooq Abdullah and other political leaders disappeared from newspapers and they were actually filled with advertisements by those severing links with them. Veteran journalist Sofi Ghulam Mohammad, editor of popular daily Srinagar Times, who passed away in 2009, once told this writer in an interview that while the print-line of the newspaper had his name, he had no say in deciding the contents.

The militants banned mourning of those shot by them. The situation at that time is best explained by a small incident. A large number of admirers of Doordarshan director Lassa Kaul wanted to express grief over his death while steering clear of the wrath of the militants.  They circumvented the militants’ ban by taking out a procession and waving placards blaming the then governor, Jagmohan, for the murder!

Since then, there has been significant transformation of the scenario. Sections of the media have united and courageously stood up against several militants’ diktats and actions like the call for the imposition of burqa, attacks on tourists and the expulsion of non-state subject (those not permanent residents of J&K) labourers from the Valley. At the same time, they have reported the death of civilians in crossfire or at the hands of the security forces and the activities of the separatist camp in keeping with the demands of their job.

Well-entrenched media houses have felt obliged to address the financial and professional needs of their staff in Kashmir. They have laid emphasis on personal security to the extent of training them how to open an envelope sealed with tape or glue or in any other manner. This was a fall-out of the murder of photographer Mushtaq Ali in a “parcel bomb” attack; he was seriously injured on September 7, 1995, and succumbed to his injuries three days later.

The problems, nevertheless, pertain to media houses which are not financially viable and look for a transparent advertisement policy of state and central governments and their low-paid staff.

The truth is that in a conflict situation, other people can only advise as the PCI has done now and it is left to an independent journalist to determine his risk assessment. He must be like a Congo journalist who said after the murders of his professional colleagues: “Our life expectancy is 24 hours—renewable.”

—The writer is Editor of Border Affairs, a quarterly journal on India’s border states and neighbouring countries