In a shocking case of corruption in a judicial exam in Haryana, the Punjab and Haryana High Court has ordered an FIR and a Special Investigation Team to probe the matter

Even as the process for selection of civil judges in Haryana and Punjab recently came in for high praise as it was being conducted under the direct supervision of the High Court, a new development has left a black mark on the judicial system.

The Punjab and Haryana High Court has found shocking evidence of corruption in the recruitment of judicial officers in Haryana, forcing it to order an FIR and constitution of a Special Investigation Team to work under its direct supervision. The exam was subsequently scrapped.

A full bench of the High Court, headed by Justice Rajesh Bindal and comprising Justices Rajan Gupta and GS Sandhawala, has ordered scrapping of the Haryana Civil Services (Judicial) Preliminary Examination, 2017 for appointment of civil judges. The Court has also directed the suspension of Registrar (Recruitments) Balwinder Kumar Sharma, as a preliminary inquiry ordered by the Court had pointed to his direct involvement in the leakage of the examination paper.

The full bench ordered that “keeping in view the seriousness of the matter and the report of the Registrar (Vigilance), prima facie, pointing out involvement of Balwinder Kumar Sharma, Registrar (Recruitments), and further recommendations made by the committee for deeper probe and disciplinary action against him, we recommend that the officer be placed under suspension with immediate effect pending disciplinary proceedings”.

Other corruption cases in judicial exams

Both were students at a coaching centre in Chandigarh. While sharing videos of classes, Sushila is reported to have accidentally shared an audio clip where she is talking to another girl and offering the leaked question paper for Rs 1.5 crore. When Suman, who was also studying in the same coaching centre, questioned Sushila about it, she made the same offer to her too. Although Suman refused, she started recording her conversations with Sushila and later moved the High Court through her husband. 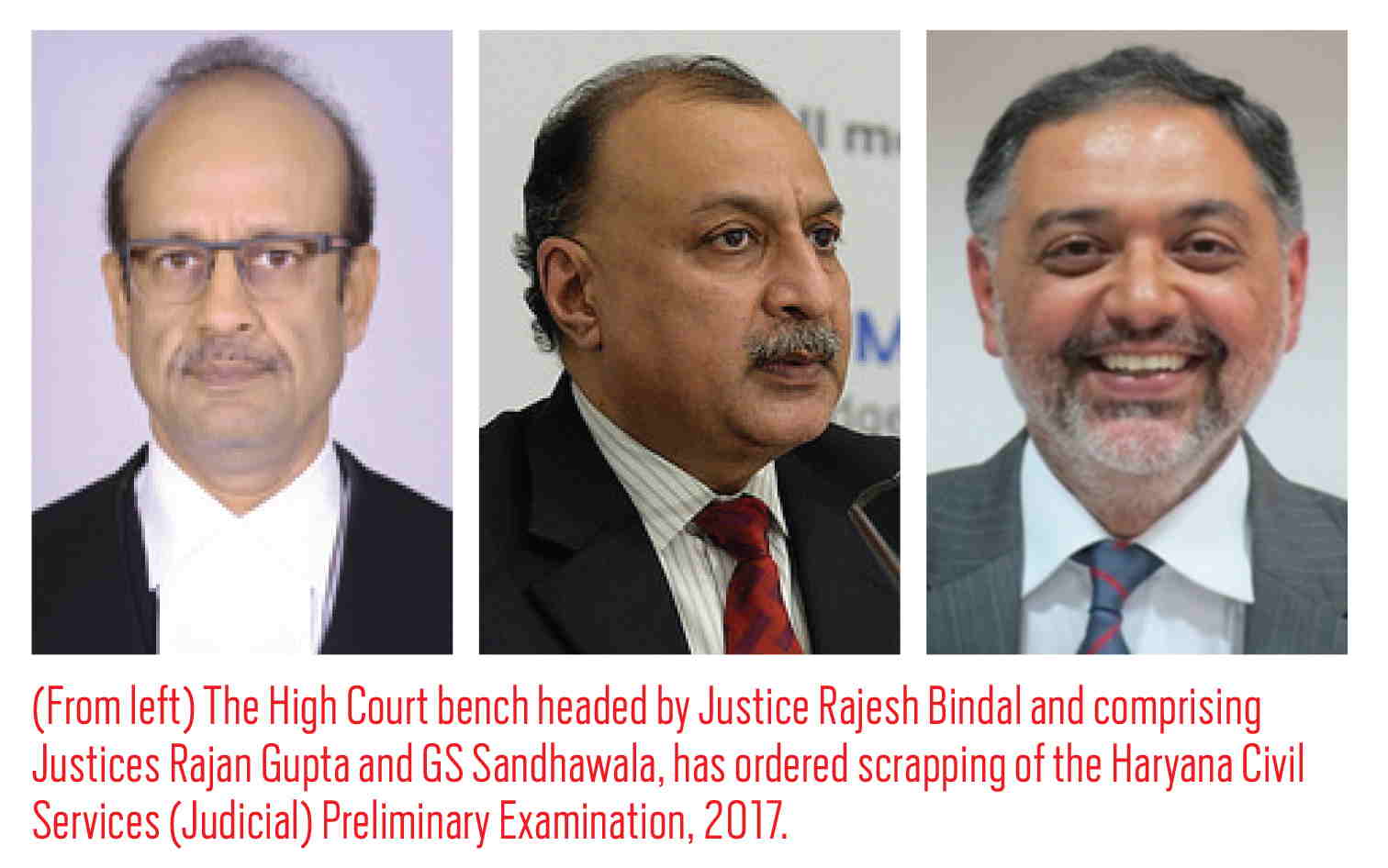 Sharma stated before the officer conducting the preliminary inquiry that he was “being made a scapegoat to save someone”. However, he didn’t name anyone and couldn’t provide any evidence to back his claims. Initially, he denied that he was acquainted with Sunita. However, investigations revealed that he was in touch with her and had exchanged at least 760 calls and text messages with her. Confronted with the evidence, Sharma had no reply. The question paper was set by two sitting judges of the High Court, Justices TS Dhindsa and AK Mittal.

The inquiry report said the High Court had received three anonymous complaints where it was alleged that two relatives of a senior High Court official had appeared in the HCS (Judicial Branch) Examination, 2017. The complaints stated that even the “practice of having non temperable seals on the question papers was not found for the examination (and) which was simply pasted with glued white paper and no videography of candidates was done”.

Sharma was not only part of the exercise to prepare the question paper since May but was also in possession of the paper with the master answer key in his pen drive till a day after the examination on July 17.

The High Court bench ordered that the FIR be lodged in Chandigarh as the leakage took place in this city. Manoj Kumar, the complainant and Suman’s husband, has been questioned by the police. The FIR was lodged against Sharma, Sunita and Sushila under the Prevention of Corruption Act, 1988 (Sections 8, 9 and 13 (1-D) and 13-2), besides IPC 409, 420 and 120-B.

The High Court is likely to monitor this case and appears keen to nail the accused to maintain the honour of the Court. The irony is that the selection procedure for Haryana judicial services had come in for high praise when CBI Special Judge Jagdeep Singh, barely six years into service, had displayed rare courage in convicting and sentencing Gurmeet Ram Rahim, chief of the Dera Sacha Sauda.

With the exam scrapped and no new dates being announced, all eyes are now on nailing the accused who leaked the question paper.