Beef is so ingrained in the culinary tradition of God’s Own Country that any restriction placed on it is sure to be met with resistance. Even as the state government gets ready to move the Supreme Court on the issue, the High Court has said the government order does not ban cow slaughter.

A divisional bench of the Kerala High Court comprising of Chief Justice Navniti Prasad Singh and Justice Raja Vijayaraghavan has dismissed a PIL challenging the Prevention of Cruelty to Animals Rules 2017, promulgated by the Union government. While dismissing the petition filed by a Youth Congress leader, the Court observed that “since the Union government’s order neither bans cow slaughter nor beef consumption but only imposes restrictions on the sale of cattle used for agricultural purpose at animal markets, it does not prevent anyone from buying or selling cattle outside the market”.

But a single judge bench from the same Court, Justice PB Suresh Kumar, reserved its order on two writ petitions filed by Kozhikode District Meat Workers Association, MLA Hibi Eden and a meat shop owner claiming that the rules notified by the Union government “infringes upon Articles 14, 19, and 21 of the Constitution of India and they amount to a colorable exercise of power encroaching upon the legislative powers of the state”.

In the midst of all this, Kerala Chief Minister Pinarayi Vijayan has been busy writing letters, first to the Prime Minister’s Office urging Narendra Modi to revoke the decision and to fellow chief ministers to garner support for opposing this order.

“The absence of efforts to take the states into confidence on such a drastic move with far reaching consequences is detrimental to our democracy. I am afraid it amounts to intrusion into the rights of states in our federal structure. It would also be against the principles of secularism and federalism enshrined in our constitution,’’ said Vijayan’s letter.

Meanwhile, legal and constitutional experts are taking the cue from the High Court’s stand. They say that though regulating cattle trade is a state subject, promulgation of the present notification originates from the parent statute which is the Prevention of Cruelty to Animals (PCA), an act passed in 1960, which falls under the Concurrent List. Hence, the Union government’s notification would prevail unless the Supreme Court takes a different stand. 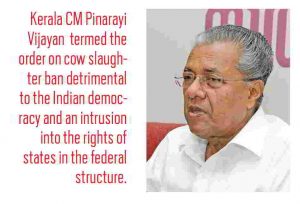 Advocate Kaleeshwaram Raj, who practices in the Kerala High Court and Supreme Court, said the central government was well within its rights to make such rules. “Just because the new notification has an effect on the state subject it does not mean it is an infringement. One needs to see what the parent statute is. The centre is competent enough to promulgate rules under the PCA Act and these rules will be as valid legally,’’ Raj told India Legal.

Experts point out that the notification does not impose a blanket ban on slaughter but only sets stringent conditions for the same, calling certain ways of slaughter as “cruelty”. Hence, there is no conflict between both.

This ban has united the ruling Left and the Congress and both are protesting shoulder to shoulder over this issue. While the youth wing of the CPI (M) carried out beef fests across the state, over-enthusiastic Youth Congress leaders slaughtered a cow in public in Kannur, leading to their arrest.

This stringent defiance is due to the unique demography of Kerala and the opportunity that beef provides in holding the vote bank together. While 26 percent of the population is Muslim, Christians form close to 19 percent, adding up to a strong 45 percent for whom beef is a part of their tradition. A Ramzan or a Christmas without beef is unthinkable in the state.

Among the 55 percent Hindus too, many consume beef and have no qualms admitting it, unlike the northern parts of the country. And this is something the main political parties in Kerala are well aware of and are maximising.

“Delhi or Nagpur cannot decide what the people of Kerala will eat. The central government is forcing their Hindutva ideology on the people so as to polarise the society in Kerala which we will not allow to happen,’’ reiterated Vijayan.

But it remains to be seen if this defiance will have impact. This is because out of 13 lakh cattle slaughtered in Kerala in 2016-17, more than eight lakhs came from Tamil Nadu and Karnataka, according to the Department of Animal Husbandry. While eight lakhs is the official figure of cattle coming in through the borders, those being smuggled could be between 2-3 lakhs. This means almost 80 percent of the cattle slaughtered for beef in the state comes from outside. In 2015-16, Kerala topped the figure for cattle slaughter at close to 12 lakhs, which is far ahead of the second state, Bihar, which was placed at 4 lakh cattle.

Finance Minister Thomas Isaac told India Legal: “Close to 2.5 lakh tonnes of meat are consumed in the state every year with a turnover of rupees 6,500 crore and some five lakh people are directly employed in this business. This ban would affect Kerala and lead to a huge nutritional crisis too. What will the Union government replace beef with? We are going to call a meeting of CMs of all like-minded states to discuss this issue.”

Quite a meaty problem.