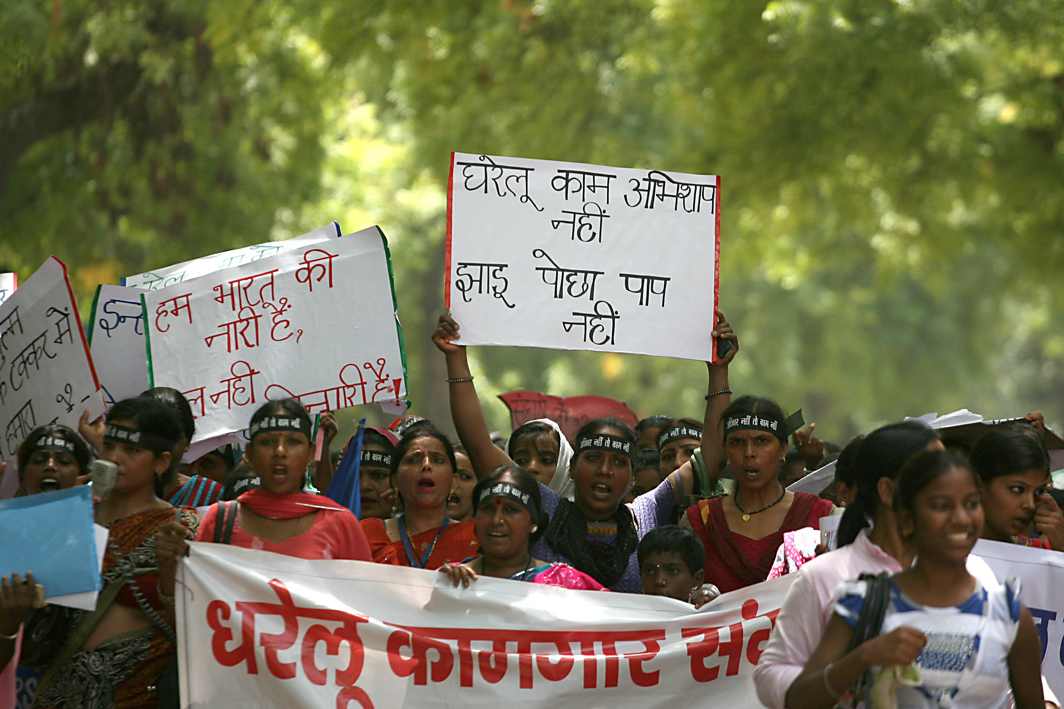 Above: Domestic workers protesting in New Delhi for a central legislation to guard their interests. Photo: Anil Shakya

Why were the maids and domestic helps at Mahagun Moderne society at Noida Sector 78 left with no other option but to use force in trying to establish their economic rights? It led to chaos and unnecessary legal hassles for the maids. As per legal opinion accessed by India Legal, they actually have little legal status as employees, hence cannot enforce any known law of the land in courts.

This is not to cast aspersions on the apartment owners at the upscale society. They, too, were within their rights to enforce a secure atmosphere within their living parameters. While they surely did not anticipate the riot-like situation that had arisen on the early morning of July 12, tensions remained high between the highly disparate economic strata, existing cheek by jowl. This is, anyway, a serious social issue that needs to be addressed urgently.

The major reason for the outburst seems to be the lack of legal protection for these domestic workers which leaves them highly vulnerable to exploitation. Labour legislations in India do not have anything specific for domestic workers, hence they are not generally categorised to benefit from the Minimum Wages Act, 1948. Their inclusion (or exclusion) varies from state to state, depending on that government’s employment schedule as per the Minimum Wages Act. Kerala and Andhra Pradesh have domestic workers categorised in their schedule, though most states, especially Delhi and Uttar Pradesh do not.

Ramendra Kumar, president, Delhi Gharelu Kamgar Sangathan, the only registered union of domestic workers in Delhi, told India Legal: “There is no general law for domestic workers at all in the country. All the existing laws are only applicable to people working in the organized sector. Only in some state schedules have they been included and there, too, their salaries are below MW Act recommendations.”

The Delhi government had formed a Minimum Wage Advisory Committee, notified on September 15, 2016, of which Kumar was a member. The committee comprised employers, workers, and government representatives which submitted its report on February 15 this year. This was for the organised sector, even for contractual labourers of that sector. Here minimum wages have been hiked to Rs 13,350 per month. Adjacent to all this rise, there was no talk at all on domestic workers.

“People have lost their faith in the system of justice. They don’t allow law to take its own due course because they don’t believe that justice will be served…”

“We had recommended inclusion of domestic workers in the employment schedule but no meeting has been called after the submission of the report. If domestic workers are included in the schedule they too can avail of all the benefits apart from getting fixed wages like getting compensated for working overtime, fixed working hours, etc. But at present domestic workers are not protected under any act or law,” said Kumar.

Not just the MW Act, but there are other schemes too, which have failed to provide any relief to the domestic workers. Like in 2011 the government had included domestic workers in the Rashtriya Swasthya Bima Yojana (RSBY)—a smart card based health insurance scheme which would give an insurance cover of up to Rs 30,000.

But the facilities of the scheme could be availed only by registered domestic workers for which they had to bring an Identification certificate from two out of the four parties—the employer, the Resident Welfare Association (RWA) of the society they work in, registered trade unions or the police. One of the certificates could be availed from a trade union but submitting certificates from two institutions became difficult. Even though the employer just had to give a self-attested ID certificate declaring that the worker works in his/her home yet they were apprehensive.

Kumar says: “Firstly, it is not an act but just a scheme and therefore there’s no violation of law for which you can approach the Labour Department. The RWAs never gave a certificate. Out of 5,000 employers we approached, only 900 of them gave a positive response and provided us with the certificate. We submitted all the papers to the Labour Department, Delhi but today not even a single domestic worker in Delhi is registered with RSBY. They registered construction workers under this scheme and that too only 7,000 got registered even though we had over one lakh contract workers.”

“Previously too, in the Congress government, there was just a one-man board for implementing the Act but from the past two years since the BJP government took power the Board Council for this Act has been defunct. There was a provision in the Act that after attaining the age of 55 a person would get Rs 10,000 as honorarium but that too has been stopped by the present government including the dissolving of the Board.”

Labour legislations in India do not have anything specific for domestic workers, hence they are not generally categorised to benefit from the Minimum Wages Act, 1948.

Although the government is working on proposals to make minimum wages a statutory right for all employees but whether it will include domestic workers too is doubtful.

Shashi Tharoor, a Congress MP, had introduced a private bill—The Domestic Workers’ Welfare Bill—in August 2016. The Bill includes all the provisions and loopholes due to which domestic helps are exploited. Like, it clearly defines ‘domestic work’, minor domestic worker and brings private households in the ambit of law, but the Bill has been lost in the bureaucratic maze since.

Another aspect of the entire ‘riot’ episode was the lack of trust that people belonging to the marginalized section of society have in the police and the system of justice. The ones who barged in to the society were common people like the neighbours of the maid, the local hawkers and shop vendors who worked in and around the society since it was built.

Dr Arvinder A Ansari, Professor of Sociology at Jamia Milia Islamia, explains: “People have lost their faith in the system of justice. They don’t allow law to take its own due course because they don’t believe that justice will be served due to which people have started taking law in their hands. When law gets regressive such incidents of violence can be encountered in the society”

The Mahagun Moderne chapter has also exposed this trust deficit, between the two classes. After the incident, the already skeptical employers had marked the workers as thieves, who misuse their necessity to keep maids. Whereas the workers now feel more threatened for themselves, seeing their employers as oppressors who brand them labels as and when convenient.

Nupur Sharma (name changed), a resident of the society angrily speaks about the maids being responsible for the disruption that occurred: “No one is innocent, none of them. No need to write in favour of these people. These people know that without them we will be helpless that is the reason they knowingly trouble us. They steal and we never complain. We think about them but they don’t”.

“All the existing laws are only applicable to people working in the organized sector. Only in some state schedules have they been included and there, too, their salaries are below MW Act recommendations.”

Whereas Sayra (name changed) who has been working here as a domestic help even before the place was occupied by its residents narrates her own insecurities. She is one of the people blacklisted by the security guards and barred from entering the premises. She says she was far away from the incident but yet her name has been listed and her ID card kept by the guards. She is worried as to what she will do if her employer doesn’t come to fetch her. She says: “I work here but they are not letting me in. After the ruckus happened they have listed our names and now they are not allowing us to get inside.”

Political maturity could have helped to stabilize the situation but it was further deteriorated by Union minister Mahesh Sharma’s intervention in the entire episode. His meeting with the society members and the announcement that followed; it will be ensured that the ones arrested get no bail worsened things.

Ramendra Kumar says: “The minister said that his party will give the workers a befitting reply. Is BJP a party of goons?”

Some say most of these workers are illegal migrants from Bangladesh. Although all of them have their Voter-Ids and Aadhaar cards checked with the police and they also go through a verification process when they are brought to work in these societies by contractors. Yet the social media is full of complaints about this, calling it ‘Malda again’. Undoubtedly, most of the domestic workers hail from West Bengal, the districts of Malda, Cooch Behar, etc. They are hired by these society people because being migrants from West Bengal they work for a low price. This is the reason that they are preferred more for work.

Shashi Tharoor, a Congress MP, had introduced a private bill—The Domestic Workers’ Welfare Bill—in August 2016. The Bill includes all the provisions and loopholes due to which domestic helps are exploited

Sayra responds to the Bangladeshi allegation saying: “We have shown our Id-proofs to the police and the society people, they still say we are from Bangladesh. Will we become Bangladeshi if they call us so? We are from Cooch Behar, our district in Bengal. Is Bengal Bangladesh?

KK Gautam, a retired Deputy Superintendent of UP Police, says: “Many of these maids are Bangladeshis and the place has many such immigrants. They are generally involved in crimes and sometimes very serious crimes. The people who keep maids do not go through the discomfort of getting them verified by the police, because nobody wants to waste their time moving around police stations. And for that reason police verification must be made simpler.

“These Aadhaar card and Voter-Id cards have become so easy to make that anyone can get them made. It is our administration’s fault. Therefore Aadhaar and Voter-ID verification must be made stricter,” he said.