The loss of livelihood and revenue to states due to the ban on highway liquor vends is huge. But with data showing that drunkenness leads to more accidents, this cocktail is not heady

On December 15 last year, the Supreme Court aimed to bring down the number of road accidents by denying the drivers easy access to liquor shops located on national and state highways. A bench of then Chief Justice of India TS Thakur and Justices DY Chandrachud and L Nageswara Rao expressed serious concern over the data which showed that drunken driving was a contributory factor to the rising number of road accidents. They imposed a ban on the grant of fresh licences to liquor shops within 500 m of highways and directed closure of those already granted licences within that distance from April 1.

The deadline forced many state governments, which apprehended loss of excise revenue due to this move, to approach the Supreme Court to seek modification of its ban. On March 31, another bench of the Supreme Court, presided over by Chief Justice JS Khehar, and comprising Justices Chandrachud and Rao, reiterated the ban, albeit with some minor relief to address some legitimate concerns.

Thus, Meghalaya and Sikkim were exempted from the 500 m distance rule on the ground that they have forest and hilly terrain. The Court reduced the distance requirement from 500 m to 220 m in towns with a population of 20,000 or less. Most of Himachal Pradesh, it reasoned, would benefit from this relaxation. It also extended the deadline for compliance with the order from April 1 to September 30 for existing licence holders whose tenure was yet to expire.

“The law can only imperfectly alleviate the consequences of road accidents. In terms of personal suffering caused to individuals and families as well as in terms of deprivation caused to society of its productive social capital, road accidents impose unacceptable costs,” the Supreme Court reasoned.

The Court justified its intervention by talking about the constitutional right to lead a life of dignity and self-worth.

The judgment reveals that in 2014, 7,307 accident cases involving driving under the influence of drugs/alcohol, resulting in 7,398 injuries and 2,591 deaths on highways, were registered. The judgment claims that with regard to the figures of death or injury due to drunken driving, there is a tendency to underestimate or under-report in order not to impede the right to victims and/or their legal heirs to receive compensation. The actual figures, it would, therefore appear, are much more than what has been disclosed.

The ban on sale of liquor with 500m of a highway could render a million people jobless in India and lead to a loss of revenue for states to the tune of over Rs 2,00,000 crore. Maharashtra could lose Rs 7,000 crore, Puducherry, Rs 60 crore and Haryana, Rs 100 crore.

There are some confusing questions that remain:

The National Road Safety Council (NRSC), an apex body for road safety, established under Section 215 of the Motor Vehicles Act, 1988, had recommended way back in 2004 that licences for liquor shops should not be given along national highways. Since 2007, the Union Ministry of Road Transport and Highways (MoRTH) has consistently advised all state governments to remove liquor shops and not to issue fresh licences to liquor vends along national highways. In 2011, the MoRTH acknowledged that drunken driving was the leading cause of road accidents, with as many as 27,152 of them being caused under the influence of alcohol.

The reason why MoRTH confined its advisories to national highways is because state highways are under the jurisdiction of state governments. The Supreme Court, however, refused to exempt state highways from the purview of its ban, as such an exemption would defeat its very purpose, as it would be discriminatory.

For a nation on the cusp of economic development, India can well avoid the tag of being the accident capital of the world, the Supreme Court reasoned in the judgment.

The bench added: “Our highways are expanding, as are the expressways. They provide seamless connectivity and unheralded opportunities for the growth of trade and industry and for the movement of goods, persons and capital. They are the backbone of the freedom of trade and commerce guaranteed by Article 301 of the Constitution. Our highways are dotted with sign boards warning of the dangers of combining speed and alcohol. Together, they constitute a heady cocktail.”

The punishment that Section 185 of the MV Act imposes for the offence of driving under the influence of a drug and leading to incapacity of exercising proper control over the vehicle is imprisonment for a term which may extend to six months, or a fine which may extend to Rs 2,000 or with both. A repeat offence, committed within three years of commission of the first offence, would result in two years imprisonment or a fine of Rs 3,000 or with both. Section 185 is indicative of a parliamentary intent to follow a zero-tolerance policy towards driving under the influence of alcohol, the Supreme Court bench observed in the judgment. 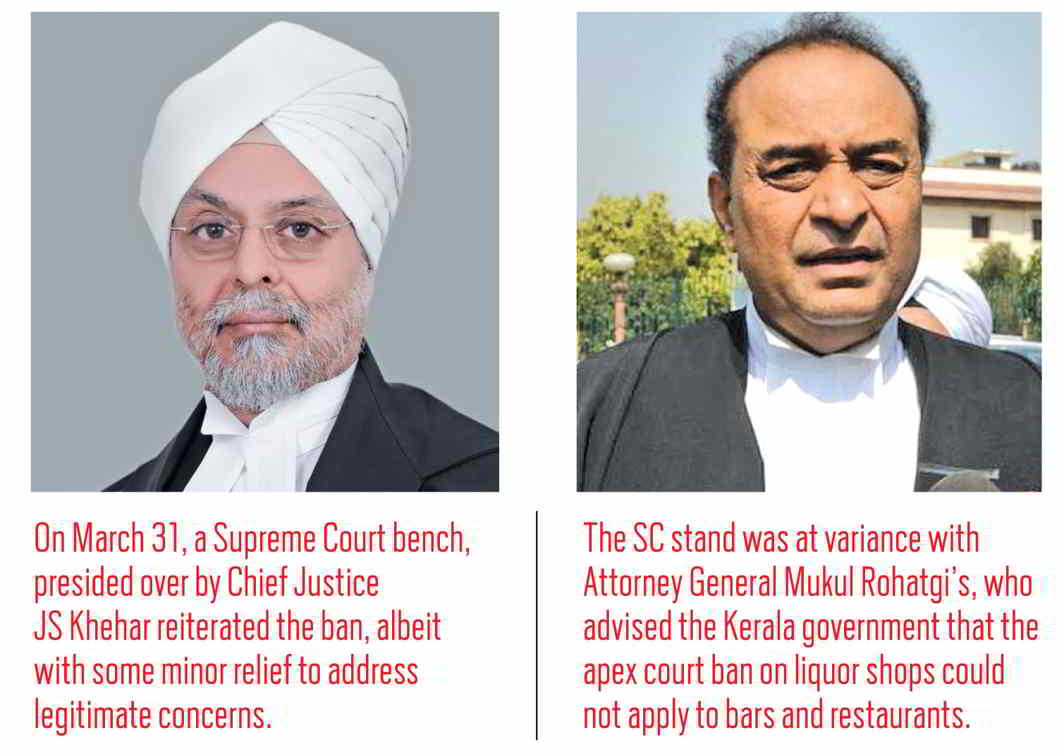 The statutory fine for drunk driving has been proposed to be increased by five times from Rs 2,000 to Rs 10,000. If the victim is killed, the proposed amendment to the Motor Vehicles Act seeks to make it a non-bailable offence punishable by up to 10 years imprisonment.

But critics ask whether harsher laws alone could be successful in ensuring driving without drinking. Surely, a driver can acquire liquor before the commencement of a journey or during it at a place other than a national or state highway. Still, the Court assumed that the central government’s advisory, based on the report of an expert body should be binding, especially on policies dealing with safety.

Loss of excise revenue to states due to the ban is one big reason why the rule has been criticised. Many states have already begun to denotify highways to evade the rigour of the law. Although the Supreme Court is likely to find this a colourable exercise of executive powers, states appear to be left with no option as they seem to have exhausted their legal remedies.

The Court also refused to relax the prohibition for bars and restaurants if the sale of liquor is not their only business. Such a relaxation, it reasoned, would defeat its very objective, and would also be against the rule of law.

This was inconsistent with the opinion of Attorney General Mukul Rohatgi, who advised the Kerala government that the Supreme Court’s ban on liquor shops could not apply to bars and restaurants as the sale of liquor is not their only business. The Supreme Court also dismissed the concerns of many senior advocates like KK Venugopal, Rajeev Dhavan and CA Sundaram that the Court’s ban on liquor shops on highways amounted to judicial legislation.

The Supreme Court’s intervention is justified on the ground that the centre has pleaded helplessness in enforcing its advisories against grant of licences to liquor shops on highways, although there is expert opinion that its prohibition could help to bring down the accident rates.

With many states being aggrieved that the ban has led to a drastic fall in excise revenue, the centre is apparently toying with the idea of making a Presidential reference under Article 143 of the constitution to seek the Supreme Court’s opinion on the issue.

One of the questions which the government would like the Supreme Court to answer in such a reference would be whether its ban on liquor shops on highways amounted to judicial legislation, which would be inconsistent with the doctrine of separation of powers, a basic feature of the constitution.