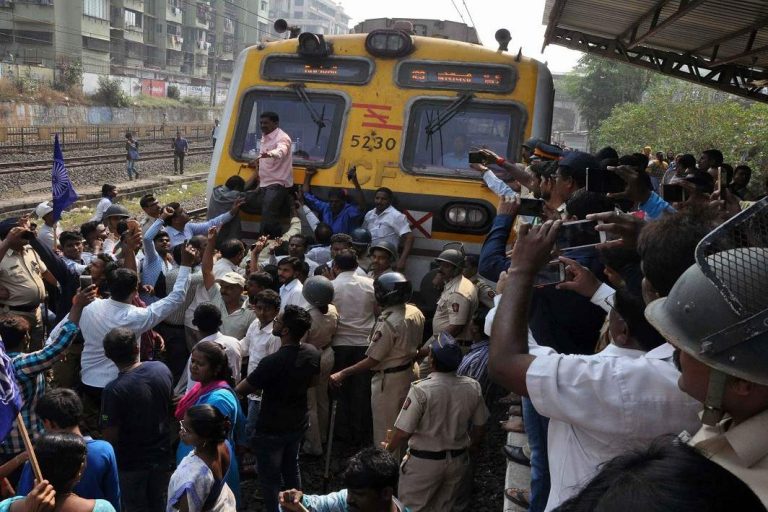 Above: Dalits protest in Mumbai against the violence in Bhima Koregaon

There have been numerous cases where the Fourth Estate has been guilty of spreading lies and inciting communities to hatred. Will a specific law help curb this menace?

Amir Liaquat Hussain is one of Pakistan’s most controversial TV hosts who often uses his platform to make inflammatory speeches against various sections of society. He once targeted Ahmadis, saying that the murder of this minority community was a religious duty. After the show, two Ahmadis were killed. A petition was then filed in the Islamabad High Court which led to him being banned from making any appearance on media outlets.

That is in sharp contrast to India where the role of the media in spreading hate is growing but there have been no curbs on the purveyors, many prominent anchors and journalists. There are numerous instances where the Fourth Estate has spread lies, inciting hatred and violence. Recently, after the violence in Koregaon in Pune, a photo was circulated, saying that Pakistani flags were waved in the Dalit rallies there. Web­sites such as Postcard News showed these photos with inflammatory captions. However, the lie was exposed by the website, AltNews, which clarified that it was an Islamic flag and not the Pakistani flag.

The Law Commission of India in its March 2017 report explains hate speech as “an incitement to hatred primarily against a group of persons defined in terms of race, ethnicity, gender, sexual orientation, religious belief and the like. Thus, hate speech is any word written or spoken, signs, visible representations within the hearing or sight of a person with the intention to cause fear or alarm, or incitement to violence”.

One case of falsehood perpetrated by the English print media, considered a credible medium, was the case of Najeeb Ahmed, a missing JNU student. On March 21, 2017, Raj Shekhar Jha of The Times Of India reported that as per the Delhi Police’s investigation, Ahmed had been looking for information on the Islamic State’s ideology, executions and network. The report alleged that Ahmed had searched for ways to join the IS on Google and that the Delhi Police had claimed that he had watched IS videos on YouTube the night before he disappeared. The report went on to say that these details had been submitted in the Delhi High Court. The story was also carried by Times Now. However, the Delhi Police categorically denied this allegation and its spokesperson said that no association of Najeeb with the IS had come up during its investigation, nor was there any such submission in the high court. The paper did not apologise for this fake news nor was the story pulled from its website.

Regarding the fake news menace in India, Washington Post wrote: “In India, a nation with 355 million internet users, false news stories have become a part of everyday life, exacerbating weather cri­ses, increasing violence between castes and religions, and even affecting matters of public health.”

Umar Khalid, a JNU student activist who was charged with sedition along with Kanhaiya Kumar and Anirban Bhattacharya in 2016 on the basis of doctored news videos, told India Legal that “the role of the media in the JNU witch-hunting was extremely disturbing, unfortunate and vicious”. Khalid was called a Jaish-e-Mohammed sympathiser on prime-time TV debates after visuals of alleged anti-national slogans being raised in the University were shown. According to TV channels, Khalid had been to Pakistan twice. “I didn’t even have a passport back then nor do I have one now. They could not link Kanhaiya and Anirban to Pakistan, so they chose to link me only because of my Muslim name,” said Khalid. “In the past two years, the police have not been able to frame charges against any of us who were arrested after the February 2016 incident in the university. But I am seen as an ‘anti-national’.”

According to the Pew Research Centre’s index on religious hostilities released in April 2017, India ranked fourth behind Syria and Nigeria. Even Pakistan was placed 10th. In a country which is so religiously diverse, India’s media, especially electronic, has often be­haved irresponsibly in spreading hate.

In June 2017, Times Now ran a two-part “investigative” series on Kerala’s Kasaragod district being a hub of IS activity, with coaching centres radicalising Hindu youth. The editor-in-chief of the channel, Rahul Shivshankar, said in his prime-time programme that the Caliphate wanted to recruit agents and get them to “invade the Hindu faith by carrying out conversions on young Hindu girls”. In the exposé, the channel revealed that conversion rate cards were distributed in WhatsApp groups. It even mentioned that the rate of a Hindu Brahmin girl was Rs 5 lakh and a Hindu Kshatriya girl Rs 4.5 lakh, whereas for Hindu girls from SC, ST and OBC categories, the rate was Rs 2 lakh. It is a moot question how a WhatsApp forward can be considered credible. This “exclusive” was later busted by AltNews.in, which reported that the said WhatsApp message had been doing the rounds for quite some time. Khalid said: “These media journalists are playing the role of Joseph Goebbels in Hitler’s administration. These news channels have peddled unsubstantiated news reports that Muslim men convert Hindu women. Why do they think that Hindu women cannot take a decision on their own about whom to marry?”­ 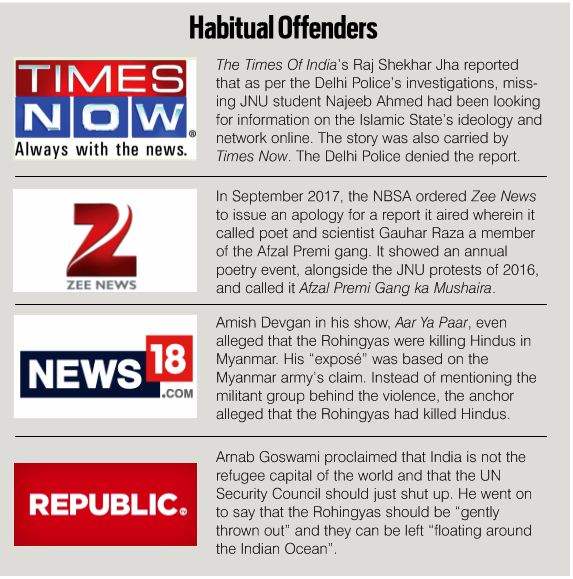 In the case of Rohingya refugees, too, Indian television hit a new low. After the Indian government informed the Supreme Court about its decision to deport them, viewing them as a threat to security, TV anchors followed suit. While most of the world expressed sympathy for these refugees, UN High Commissioner for Human Rights Zeid bin Ra’ad al-Hussein slammed India for its indifference to their terrible suffering. Meanwhile, prime-time debates questioned the loyalty of all those who stood by these refugees. Arnab Goswami of Republic TV proclaimed that India is not the refugee capital of the world and that the UN Security Council should just shut up. He went on to say that the Rohingyas should be “gently thrown out” and they can be left “floating ar­ound the Indian Ocean”. The TV coverage referred to the Rohingya refugees as Rohingya Muslims, with slanted programmes on several channels such as Zee News and India TV, to name a few. Amish Devgan of News 18 India in his show, Aar Ya Paar, even alleged that the Rohingyas were killing Hindus in Myan­mar. His “exposé” was based on the Myanmar army’s claim of having found a mass grave containing the bodies of Hindu women and children. Instead of mentioning the militant group behind the violence, the anchors alleged that the Rohingyas had killed Hindus in Myanmar. The reality was that all the communities living in the region, along with Buddhists and Muslims, had been affected.

Unfortunately, though the News Broadcasting Standards Authority (NBSA) has tried to regulate the TV industry against hate speech and misreporting, few take its orders seriously. The NBSA was formed by several media houses to self-regulate the industry. It has been reduced to a toothless entity.

In September 2017, the NBSA ordered Zee News to issue an apology for a re­port it aired between March 9 and Mar­ch 12, 2016, wherein it called poet and scientist Gauhar Raza a member of the Afzal Premi gang. It showed a poetry recital by Raza at Shankar-Shad Mushaira, an annual poetry event, along with the JNU protests of February 2016 and called the show Afzal Premi Gang ka Mushaira. It branded Raza an anti-national poet. The NBSA received two complaints against this—one from Raza and a joint one by actor Sharmila Tagore, singer Shubha Mudgal, poet Ashok Vajpeyi and lawyer Vrinda Grover. The NB­SA imposed a fine of  Rs 1 lakh on the broadcaster along with an order to air a full-screen apology in large typeface with a clearly audible voice over in slow speed on September 8 at 9 pm. However, Zee News cocked a snook at the NBSA and audaciously went ahead with its regular programme, and aired no apology.

Unfortunately, social media has often been the trigger of hate between communities. Amber Sinha, senior programme officer at the Centre for Internet and Society, told India Legal that the complexity of restricting hate speech has to do with a number of factors. These in­clude the ubiquity of strong opinions in online speech, often offensive to certain groups, the interplay between individual and group rights, and the values of dignity, liberty and equality. “The bigger challenge to regulation of hate speech is not just the vastness of the medium, but the formulation and application of legal tests in criminal law with respect to this issue. Hate speech has as much to do with the content of speech as it has to do with the context,” said Sinha. “A multi-layered approach, which employs technological solutions, counter-speech and norms along with the law ought to be adopted.”

The Supreme Court, in Pravasi Bhalai Sangathan vs. Union of India, had clearly indicated that hate speech must be viewed through the lens of the right to equality and relates to speech not merely offensive or hurtful to specific individuals, but also inciting discrimination or violence on the basis of inclusion of individuals within certain groups.

However, the apex court bench of Justices Dr BS Chauhan, MY Eqbal and AK Sikri had observed that “it is desirable to put reasonable prohibition on unwarranted actions but there may arise difficulty in confining the prohibition to some manageable standard and, in doing so, it may encompass all sorts of speeches which needs to be avoided”.

The apex court had given the example of US courts which for long had upheld legislation curtailing “hate speech” and related issues but of late, they, too, had shifted gears, thereby “paving the way for myriad of rulings which side with individual freedom of speech and expression as opposed to the order of a manageable society”.

The apex court requested the Law Commission to define “hate speech” and also make recommendations in the matter after which the Commission submitted its report in March wherein it mentioned several measures to curb hate speech. It identified six parameters for hate speech: the incitement, the extremity, potentiality and context of the hate speech and status of the author and victim of the hate speech. The Commission recommended insertion of new sections in the Indian Penal Code—Section 153C (prohibiting incitement to hatred) and Section 505A (causing fear, alarm or provocation of violence in certain cases) through “words either spoken or written, signs, visible representations”.

But Sinha said it is the consequence of speech that is the determinative factor in interpreting hate speech rather than even perhaps the content of the speech. “Section 505A, for instance, refers to ‘highly disparaging, indecent, abusive, inflammatory, false or grossly offensive information’ and ‘derogatory information’. These are extremely broad terms, not having any guiding jurisprudence within Indian or international law,” he said.

While Khalid does not support a law to keep a check on the media, he points out that if it was proven that an attack was aimed at defaming a person as in Najeeb Ahmed’s case and where the police, too, had denied the story, the guilty journalist should be sacked. “Regulations would be used to silence critics of the regime, while those who are close to the powers-that-be will get away,” said Khalid. A law does not always solve all problems.