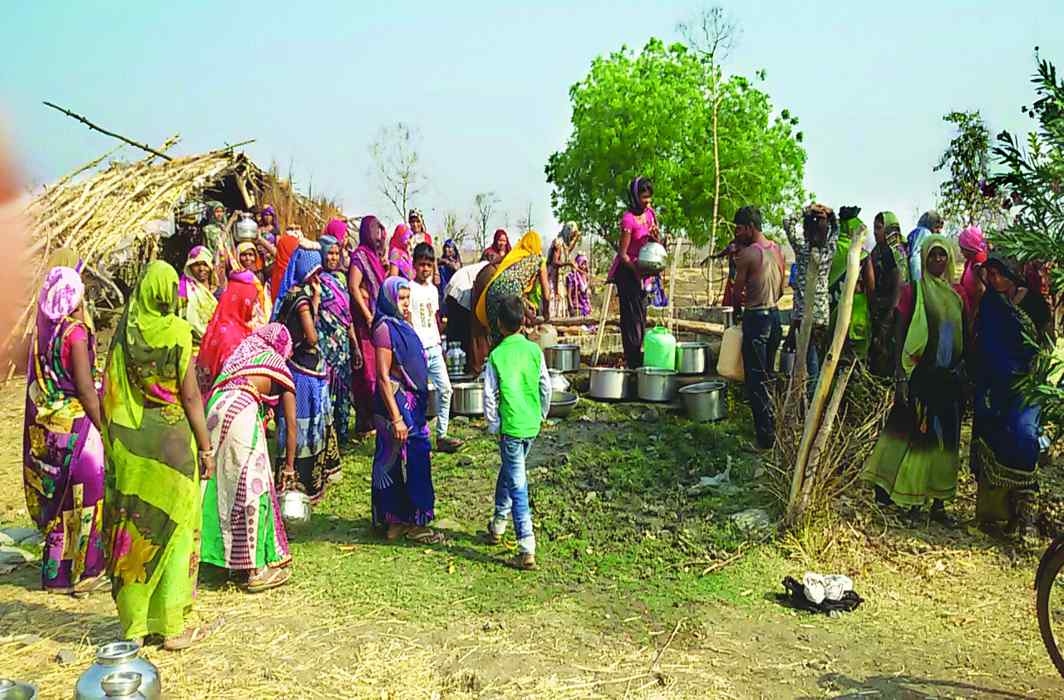 Above: Water crisis emerged as a major issue in the last assembly elections in Madhya Pradesh/Photo: www.hindi.indiawaterportal.org

Madhya Pradesh (MP) Chief Minister Kamal Nath has proved himself a canny politician and someone who knows how to keep the voters happy with rights-based initiatives. His latest offering is the promise of water and health becoming fundamental rights for citizens of the state. His government is likely to introduce two pieces of legislation in the next assembly session to make this an official policy, thus becoming the first state to do so.

According to state health minister Tulsi Silawat, the proposed right to health scheme will benefit nearly 1.8 crore people. One proposed legislation, Right to Water, has provisioned a supply of 55 litres of water per day for each person.

According to the draft of the other Bill which will be tabled in the assembly, the Right to Health will ensure deli­very of basic healthcare services within 3 km, primary care facilities within 12 km and treatment of serious illnesses within 50 km (or a one-hour journey) and critical illnesses with fully skilled specialists within 150 km. The government will provide insurance cover to 97 percent of individuals with a cap of Rs 1.50 lakh. The remaining three percent will be covered by a corpus fund. Anyone living in rural areas will get the same healthcare facility as his/her urban counterpart. “We need to increase resources for improving healthcare,” said Additional Chief Secretary, Finance Department, Anurag Jain.

Health department sources say once the Bill on Right to Health is passed in the assembly and becomes an Act, the state government will have to put in place adequate financial and institutional arrangements to implement it. The department is mulling PPP models to broadbase healthcare expansion.

While fixing the responsibility of the government regarding healthcare for citizens of the state, the Bill also specifies the legal consequences if the government fails to act. For instance, the next time there is a dengue or H1N1 outbreak in the state, various departments, including Health, would be held responsible and face punitive action.

The state government will also set up forums for grievance redressal with regard to deficiency in healthcare facilities. “This is a good step. There is a need to bring a law on the right to health and healthcare to achieve universal healthcare,” said Amulya Nidhi of Jan Swasthya Abhiyan which has been advocating for the right to health in India. He said that the organisation had submitted a draft proposal to the state government. Some of the key points proposed were integration of health guarantee schemes at the national and state levels, a separate grievance redressal platform to cover complaints on denial of services, negligence and
non-implementation of essential health services, and community monitoring of the schemes and programmes under the National Health Mission.

The proposed move to legislate on Right to Water is premised on the fundamental Right to Life. Minister, Public Health Engineering, MP, Sukhdeo Panse said that the Right to Water is a part of Right to Life enshrined under Article 21 of the Constitution and his state would be the first in the country to take this initiative.

However, before enacting the Bill on Right to Water, the state government would consult experts in the field, educationists and get legal inputs, apart from seeking opinions from beneficiaries. The Public Health Department had organised a workshop of water scientists, experts and officials on June 24 to deliberate the proposed Bill. About 100 water experts, who have done commendable work in water conservation, were present, including Akihiro Natori, a water consultant from Japan, who is working in Mandsaur and adjoining areas of MP.

Chief Secretary Sudhi Ranjan Mohanty is of the view that there can be no right without proper legislation, so the government will soon take steps in this direction. “MP will become the first state in India to provide legislated guarantee to its citizens on healthcare and water availability,” he told India Legal.

In a recent meeting with senior officers, Kamal Nath expressed confidence that the proposed Right to Water Bill will be instrumental in ensuring requisite quantity of water to urban citizenry. He said this while reviewing future plans of the state urban development department. The proposed Right to Water Act will also have stringent provisions for preventing wastage of water.

According to a government report, almost the entire state is facing water crisis in varying degrees. Out of 52 districts, around 40 are reeling under a water crisis. With the onset of summer, the crisis aggravates, leading to riot-like situations at public taps in some towns. The state has 2,400 lakes and water reservoirs and their longevity depends on the catchment area. The government will cover the catchment area projection under the water act.

Magsaysay Award winner Rajendra Singh praised the government’s idea of Right to Water and termed it a “revolutionary Act”. “MP is a spoiled son and Rajasthan is a foster son of the rain god. MP had water, but it didn’t value it while Rajasthan faced scarcity, therefore treasured it,” said Singh. He pointed out that engineers need to work with conservators to implement the government’s schemes properly.

Singh also emphasised the need for launching a mass awareness movement to connect people before bringing the Right to Water Bill.  “There is an urgent need to make people water-literate,” he said. Panse concurred with Singh’s view and added, “Only when the issue is linked with the primary, middle and secondary education school and college curriculum, children and youth will be able to understand the importance of water conservation. The government has also planned to remove encroachments along water bodies.” The minister admitted that encroachments have had a major role in the drying up of a large number of water sources. “All encroachments will be removed and the government will incorporate all these factors in the proposed Act,” he said at a seminar.

The state government has formed a water cell dedicated to work on intricacies related to the proposed Act. Responsibility for the water cell has been entrusted to a secretary-level officer. Committees have also been formed to engage youth in water conservation.

The CM said that the committee members will work as jal doot—water ambassadors—conserving water and water resources. The guidelines for the proposed Act have stressed small but useful initiatives instead of big schemes. Focus will be on works related to ponds, check-dams, percolation ponds, on-farm ponds, construction of boundaries and well recharge in rural areas. The CM has urged affluent farmers to take up works of ponds and groundwater recharge on their farms. The legislation indeed has the potential to become a model for other states.