The assault on an airline employee by an MP led to carriers banning the politician from their flights. But is this legally tenable and should India have a blacklist like some western nations?

It was in June 2014 that Sanjiv Kapoor, then COO SpiceJet, reportedly tweeted:  “Ground staff, cabin crew in India takes a lot of abuse. This kind of behaviour would send people behind bars in other parts of the world. You cannot abuse crew ever!” Indeed. Airline staff in India is often at the receiving end of many abuses. This was seen recently when Shiv Sena MP Ravindra Gaikwad slapped an AISATS (a joint venture with Air India and SATS) employee with his slippers, creating a furore and forcing airlines to think of a no-fly list (NFL) which bans such passengers on their flights.

Indians are often perceived as bad air passengers, using threats, tantrums and harassment to get their way in planes. On March 9, Minister of State for Civil Aviation Jayant Sinha, while replying to a Lok Sabha question, gave airline-wise details of unruly passengers from July 2016 till date. (See Box) The severe beating of the AISATS staff, 25 times as the MP himself bragged, was the last straw. With AI banning Gaikwad from its flights and other airlines following suit, it seems like a wake-up call to not tolerate passenger loutishness any more. But are these measures legally tenable?

According to Section 3, Series M, Part VI of the Directorate General of Civil Aviation’s Civil Aviation Requirements (CAR), dated November 18, 2014, which deal with the handling of unruly/disruptive passengers: “Passengers who are likely to be unruly and disruptive must be carefully monitored, and if necessary, refused embarkation or off-loaded, if deemed to pose a threat to the safety and security of the flight, fellow passengers or staff while on board aircraft.”

It further adds: “Airline shall establish mechanism to detect and report unruly passenger behaviour at check-in, in the lounges, and at the boarding gate in order to prevent such passengers from boarding. In case of occurrence of an act of unruly behaviour while the aircraft is on the ground, such cases shall be reported immediately in writing and First Information Report (FIR) lodged with security agency at the aerodrome for assistance.” 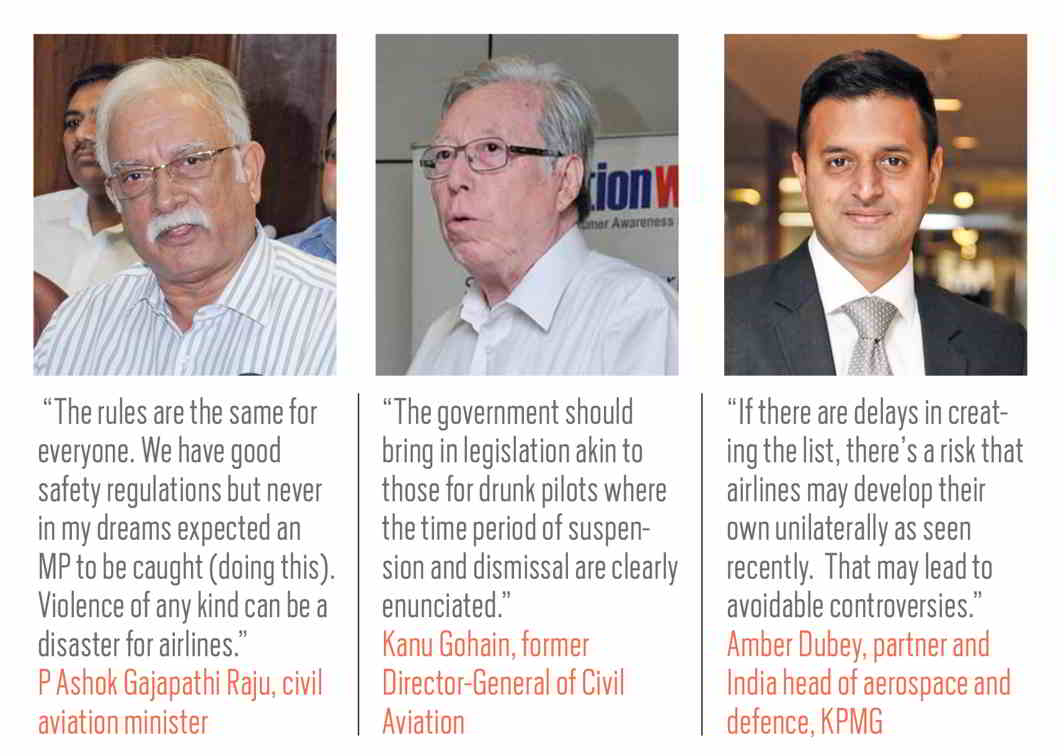 Amber Dubey, partner and India head of aerospace and defence at global consultancy KPMG, told India Legal that aviation laws in India are derived from Aircraft Act 1934 and ICAO Standards & Recommended Practices. “These Practices are detailed out within 19 Annexures to the Chicago Conven-tion. Annex 17 deals with all aspects of civil aviation security but does not cover the establishment of a no-fly list. It does, however, provide adequate powers to member states to enact their own legislation to secure civil aviation. India is free to enact a no-fly list (NFL) if it deems it necessary.”

In India, the Bureau of Civil Aviation Security (BCAS) regulates security matters and the DGCA regulates safety matters, explains Dubey. “The DGCA CAR (Section 3, Series M, Part VI) deals with unruly passengers and lays down the procedure to file an FIR. BCAS and DGCA have no provisions for an NFL presently, though various stakeholders have been demanding the same for quite some time now,” he said.

There’s an urgent need for corrective measures in Indian aviation, stressed Dubey, due to many factors. There is the increased risk from terror groups, more first-time flyers who are confused and longer security queues, all leading to higher anxiety levels in passengers and unruly behaviour. 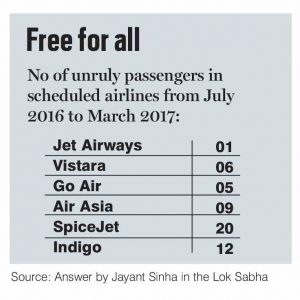 Kanu Gohain, former Director-General of Civil Aviation, told India Legal that this CAR was hurriedly written. “It only talks of what to do with such a passenger when he boards or disembarks. It does not factor in suspension and dismissal of such a person from future flights. The government should bring in legislation akin to those for drunk pilots where the time period of suspension and dismissal are clearly enunciated.”

Asked if he favoured a permanent ban on Gaikwad, Gohain said: “Human beings often act on the spur of the moment. I would prefer a temporary no-fly ban on such passengers. As this MP is attending parliament presently, let the ban take place after it is over.” But surely an apology from the MP would have cooled down tempers.

No-fly lists became part of aviation lexicon after the 9/11 attacks in the US and many countries have such lists under different names such as the US, Canada and Malaysia. In almost all cases, the list is based on serious threats to security such as terrorism, drug-trafficking, sexual offences, etc.

“A no-fly list in the US is maintained by the FBI’s Terrorist Screening Center and is disseminated to all airlines and some friendly countries. No rationale is provided as to how the threats are examined and classified,” said Dubey.

No-fly lists became part of aviation lexicon after the 9/11 attacks in the US and many countries have such lists under different names.

Are these no-fly lists permanent? In April 2015, the US government announced that it would inform US citizens and lawful permanent residents whether they are on the NFL, and, possibly, offer reasons for the same. In October 2015, a federal court ruled that district courts have jurisdiction to hear challenges to NFL, establishing a precedent for courts throughout the US, said Amber Dubey. 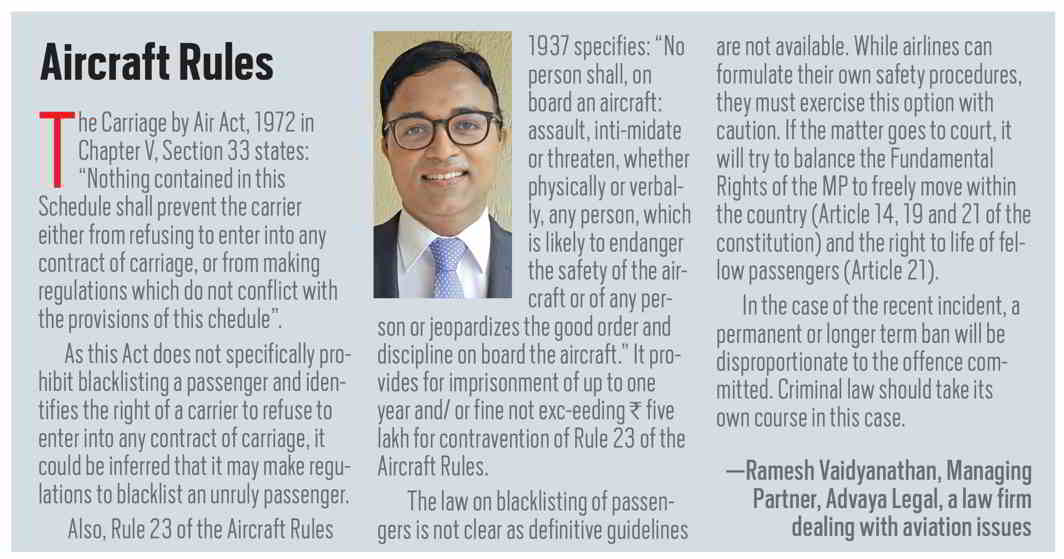 According to The Washington Times, FBI’s no-fly list in 2016 contained about 81,000 names, but fewer than 1,000 of those are “US persons”. Delta Airlines, for example, imposed a lifetime ban in November 2016 on a passenger who disrupted a flight by yelling statements in favour of then US President-elect Donald Trump and insulted women who supported Democratic candidate Hillary Clinton by calling them “Hillary Bitches”.

The UK does not have a no-fly list, though individual airlines can have their own. For example, in 2015, budget airline Jet 2 put a lifetime ban on 50 passengers for “unacceptable behaviour”.

In India, meanwhile, a statement by Civil Aviation Minister P Ashok Gajapathi Raju in the Lok Sabha has come as a shot-in-the arm for airlines. “The rules are the same for everyone. We have good safety regulations but never in my dreams expected an MP to be caught (doing this). Violence of any kind can be a disaster for airlines,” he said. And in another incident, Air India is also planning to warn stand-up comedian Kapil Sharma for creating a ruckus during a flight to Australia.

What is unruly behaviour in the air?

Though aviation officials are examining if India can blacklist such disruptive passengers, it is high time it had one to stop such loutish and high-handed behaviour. A senior commander asserted that every airline has the right to deny admission to a passenger. He said there had been a move some 3-4 years back by an airline to have a blacklist. “It was discussed with the DGCA and it had even asked the opinion of other airlines, but nothing much came out of it,” he claimed. Any such list will have to be full-proof using certain identifications such as Aadhaar, have a time-frame and redressal mechanisms.

“I would welcome such a ban on unruly passengers. I have personally handed over five passengers to the police during my career with various airlines. Slapping someone is a criminal offence and anyone who says his constitutional right is infringed with a ban should know that certain responsibilities also come with such rights,” he added.

Some airlines such as Air India also have plastic handcuffs on board. And Section 3 of the CAR allows airlines to use them as it says that “restraining devices should be used when all conciliatory approaches have been exhausted”. Some airlines also have sky marshals on board on certain sensitive routes and in plain clothes. They were introduced after the Kandahar hijacking where an AI plane was hijacked from Kathmandu to Delhi by the Harkat-ul-Mujahideen on December 24, 1999.

The incident involving the MP shows that the government needs to come up with a NFL, said Dubey. “If there are delays in creating the list, there’s a risk that airlines may develop their own unilaterally as seen recently. That may lead to avoidable controversies.” It is also important that airlines and the government don’t misuse this list to harass opponents. In the US, three Muslims sued the FBI for putting them on an NFL, saying it violated their constitutional rights. They claimed compensation despite being taken off the list.

Aviation insiders are glad the Gaikwad incident has drawn attention to a problem they face daily—unruly passengers. Security, after all, in no laughing matter at 30,000 feet.