The killing of a Congress leader has exposed MP’s penchant for political vendetta and with the government backing the accused minister, he could well go scot-free

Although the Gwalior bench of the Madhya Pradesh High Court quashed a non-bailable warrant against Arya on May 31, he is still not out of the woods as yet as the Court pointed out two legal flaws in the Bhind trial court’s order, which was passed on May 19. The Bhind court had made Arya an accused after booking him under Sections 302 and 120 (b) (conspiracy). However, the court stayed an arrest warrant to give the minister an opportunity to argue.

The High Court’s single-bench of Justice Sheel Nagu ruled that Bhind’s trial court judge had no power under the Criminal Procedure Code to stay his own order passed on the same day. Arya’s counsel Surendra Singh argued that the petitioner was made an accused on weak evidence and without his side being heard.

Arya was named the main accused by Jatav’s family members and three eyewitnesses. But the police ignored these charges and instead, relied on Arya’s security guard who did not name anyone. The CBI, which later took over the high-profile investigation, spared the minister for “lack of evidence” against him. This is not surprising, as from the beginning, this case was characterised by political opportunism and shoddy investigation.

However, the most stunning volte-face was seen in the case of Bhagirath Prasad, Bhind’s Lok Sabha candidate for whom Jatav was campaigning when he was shot dead in 2009. Prasad had categorically stated then that Arya had got Jatav murdered. However, following the Bhind court’s May 19 order, he said: “Despite my statement, the CBI and the police had found no evidence against Arya. Even I did not have concrete evidence that Arya had ordered the killing. My statement at best was noncommittal.” He said attempts to target him were “politically motivated”.

Incidentally, Prasad was principal secretary (home) till he took voluntary retirement in 2007. He contested the 2009 Lok Sabha elections as a Congress candidate but lost. However, he got a ticket again in 2014, but defected to the BJP and won from Bhind.

It all began in the November 2008 assembly elections when Makhan Lal Jatav, a little-known Congress worker, clashed with two-time BJP MLA Lal Singh Arya for the Gohad seat and won, taking everyone by surprise. As a shocked Arya licked his wounds, Jatav’s supporters further infuriated the BJP leader by hurling stones at him in a function. Arya had filed an FIR against Jatav and his supporters. On April 13, 2009, during campaigning for the Lok Sabha election, both Jatav and Arya came face to face at Chharenta village in Gohad around 8.15 pm. According to three eyewitnesses, Jatav was sitting in the front seat of his Bolero with his son, Arvind, while his two armed guards sat behind. He had halted the car and was speaking to villagers when two persons walked up and shot him twice. Arvind told the police he heard Arya shout: “Makhan ko maro, bachna nahi paye (Kill Makhan, he should not escape).” Eyewitnesses said Arya was present at the scene.

As the Congress mounted pressure for Arya’s arrest, the BJP government of Shivraj Singh Chouhan handed over the probe to the CBI. After investigation, the CBI identified six persons as accused and chargesheeted them in the special court in Bhind. Arya was excluded.

Of these six, Tej Narayan Shukla was found murdered under mysterious circumstances at his farmhouse in 2014 when he was out on bail. 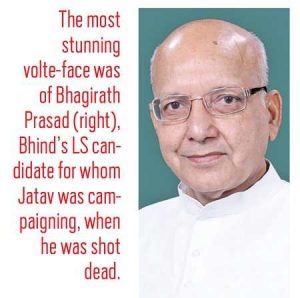 Senior Congress leader Dr Govind Singh claims that Shukla was in his party but later aligned with Arya. Shukla was reported to be angry with Jatav for raising some land dispute related to him in the state assembly. Singh claimed the deceased had expressed apprehensions that Arya could get him murdered. The murder case dragged on till April this year when the CBI finally filed an affidavit saying Arya was innocent as his name figured neither in the FIR nor in the chargesheet filed by it.

Jadav’s son Arvind countered the CBI affidavit, and filed an application to include Arya as one of the accused under Section 319 of the IPC. Arvind’s lawyer, Ram Pratap Kushwaha, told the Court that his client had submitted a similar application soon after the murder also but the police chose to rely on the gunman’s FIR which did not name Arya. Arvind’s elder brother, Ranveer, said that his father’s guard, a government employee, had deliberately avoided naming Arya, but there were other eyewitnesses too whose accounts eventually prevailed, leading to the arrest warrant.

The Court order spurred the Congress and a delegation of the party led by the leader of opposition, Ajay Singh, called on Governor OP Kohli on May 27 to seek the dismissal of the minister on moral grounds. However, Arya told journalists that the CBI had given him a clean chit. “My counsel applied for quashing the warrant execution, which the high court has permitted,” said Arya.

However, the BJP has backed the minister, with state party president Nandkumar Chouhan saying there was no need for him to resign. After the High Court ruling, Chief Minister Shivraj Singh Chouhan too said the question of the minister’s resignation does not arise.

Probity in high places seems to be in short supply.