Cleaning up the river has been a complete failure because of the total disregard of Supreme Court and NGT orders. The polluting tanneries in Kanpur are a case in point

The complete failure of Ganga Action Plans I and II has been the result of total apathy of state governments towards environmental issues—the fact that Supreme Court directives over the years have been flouted at will is a testimony to this fact. This indifference is particularly noticeable in Kanpur where tanning industries are by far the largest polluters of the Ganga. The court has been hearing arguments by Magsaysay award-winning public interest attorney, Mahesh Chandra Mehta, since 1985, but the net result has been a big zero.

Recently, there has been a proposal to move highly polluting tanneries from the banks of the river, but the attorney general of Uttar Pradesh has clearly stated that this is not the intention of the state government. This keeps alive the huge problem of oversight regarding primary and secondary effluent treatment plants (PTEP & ETP). There is little that the court can do if a plant is working in the narrow and dirty bylanes and streets leading to the tanneries of the Jajmau and Unnao districts next to Kanpur. Ascertaining if a plant is functioning properly is difficult when supervisory work is riddled with corruption and is totally in the hands of the local administration.

Way back in 1997, this correspondent was in Kanpur studying the Ganga pollution issue. We wanted to visit a particular tannery that was ordered shut by the Supreme Court because it lacked the regulation ETP. The owner of the tannery was a prominent politician of the area and we were given a tour inside. The main gate was shut, with the Supreme Court’s notice pasted on it. The back door led to the tannery, where work was on as usual in complete disregard of the court’s order. There was absolutely nobody to report the violation to the court and the systems in place for regular checks weren’t working. The electricity had been cut off, but a power generator was on.

So what is the situation 20 years later? Things have only worsened.

The figures put out by various agencies of the UP and Uttarakhand governments—the ministry of Environment and Forests, UP State Pollution Board, UP Jal Nigam, the Uttarakhand government  and the Central Pollution Control Board (CPCB)—are so varied that the National Green Tribunal (NGT), headed by Justice Swatanter Kumar has strongly rebuked the authorities.

This brings to focus a February 22 judgment of the NGT which ordered electricity to all non-compliant (PETP not installed or non-operational) polluting industries to be cut off following a three-month notice. Restoration will be with the okay of the respective state pollution control boards.

The apex court also put the pollution control boards on notice, saying that they had the responsibility of oversight. The order was passed by a Supreme Court bench comprising Chief Justice of India JS Khehar and Justices DY Chandrachud and Sanjay Kishan Kaul on a petition by Paryavaran Suraksha Samiti, an NGO. The bench avoided any clash with orders of the NGT, saying: “We are not going to override any order of NGT. If only any issue is left (out) by NGT then our order will be enforced.” The CJI also offered a few practical solutions. He said: “Common effluent plants, which is the responsibility of the corporation… we will give three years. But where it is already installed, but not working, then you can charge from the user like Rs 50 from factories or Rs 30 or Rs 20.”

The judgment is a very fair one, and has considered all the issues that might crop up. However, implementation remains a problem.

According to activist Rakesh Jaiswal: “There are 403 tanneries in Jajmau (near Kanpur) on the banks of Ganga. These tanneries generate roughly 50 million litres per day (mld) of wastewater (as reported by the Central Leather Research Institute, 2012).

“Today, tannery discharge is 50 mld, the treatment system can still handle 9 mld. That, too, is not being treated adequately. Roughly 40 mld is going into the river untreated.

“Also there is no proper system to dispose of the hazardous solid waste which is being generated by the tanneries and the CETP.”

Beyond the courts and beyond the corridors of power, Rakesh Jaiswal, a social worker has dedicated his life to the cleansing of the Ganga. He is an Ashoka Fellow and his work has been for the restoration of the river, the lives and vegetation along its banks. Jaiswal told India Legal: “In 1997, Eco Friends (his organisation) organised a Ganga Cleaning campaign on a massive scale at Kanpur. In a three-phased programme we fished out 180 human bodies from the river and got them buried on the banks. We failed to evoke any interest from the government.”  This is the other problem, despite the government setting up virtually free electric crematoria, dumping dead bodies in the river remains a religious tradition.

Adds Jaiswal: “At that point I had written letters to various constitutional authorities, including Justice Giridhar Malviya of the Allahabad High Court. My simple half-page letter was treated as a writ petition by Justice Malviya and a PIL was filed. This was a high profile case in 1997-1998. Several directives were passed by the court, including closure of 127 tanneries in Kanpur. These tanneries did not have PETP. It was ruled that they would only be allowed to reopen once they installed the PETP.”

The order came during then Chief Minister Mayawati’s second term after a bout of President’s rule which ended her earlier term. Some of the apex court’s rulings had already come (see box), shutting tanneries and this correspondent was witness to the farce being enacted by the state authorities through legal loopholes.

The Supreme Court Bench of Justices ES Venkataramiah and KN Singh observed in their order of September 22, 1987:

This was one of the earliest orders that was completely disregarded by the tanneries and the state government.

Why did the state government then and even now refuse to ensure the closure of the polluting tanneries? It is plain to see that it is a political issue. Of the 2.5 million labourers employed in the leather sector in the country, over half of them work in Kanpur and adjoining areas. Jajmau has some of the largest tanneries in the country and the work force comprises mostly Muslims or Dalits, coming from the bottom rung of the economic ladder. 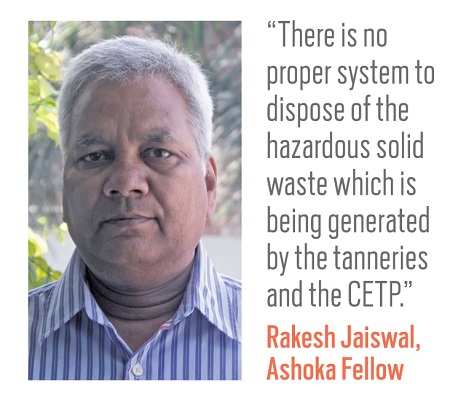 In 1997, I had visited the house of Babulal, a Dalit tannery worker. He was happy that the Mayawati government had given him a plot of land. Later it was found that the land belonged to the Railways and Babulal was quickly evicted. Such is the level of vote-bank politics in the area that the netas tend to cultivate workers and appease them to gain advantage.

The state, therefore, is unwilling to disturb the delicate balance they have achieved within the Muslim-Dalit vote bank. Keeping the tanneries open at any cost is one incentive that no political party will budge from. Even then, of the 400-odd tanneries, nearly 150 have shut in the last five years, because of two reasons. Firstly, many of them could not fulfil the PTEP requirement and secondly because of a massive shortage of raw hide due to the anti-cow slaughter drives.

The situation is so volatile that no law enforcement authority in the state—politicians included—dare touch the area to enforce court orders. The local sub-soil water is so contaminated that even irrigation isn’t viable (a huge rose plantation business in the area simply faded out in the late 1990s); hence an alternative livelihood isn’t a possibility for people there.

In Kanpur today lives a society, stuck between the tanneries and a hard place.