The Left government’s new liquor policy relaxes harsh restrictions imposed to curb the consumption of alcohol. While many are celebrating, others are calling it an anti-people and regressive move

It was champagne time for the tourism, liquor and hospitality industry in Kerala recently. What brought good cheer was the Left Democratic Front (LDF) government’s decision to scrap the phased prohibition policy initiated by the Congress-led UDF government that preceded it. Justifying the move, Chief Minister Pinarayi Vijayan labelled the earlier policy as “impractical.”

Said Vijayan: “We completely understand and respect the sentiments of the people who stand for prohibition. But it is an impractical solution in Kerala. So, the government has this strong conviction that the policy needs to be changed in lines with the realities before us.’’

With the scrapping of the old policy and the introduction of new norms, hotels with three-star ratings and above can now serve hard liquor in Kerala. This was something which the former UDF government had strictly limited by allotting liquor licenses only to five-star hotels. Others were only permitted to run beer and wine parlours.

With the new policy, some 712 odd bar owners in the state have every reason to smile. But 550 of them are located within 500 metres from highways which falls under the Supreme Court’s ban on bars and liquor vends. But the state government has decided to help relocate these bars away from the highways. So, unless there are some legal hurdles, it is a win-win situation for the liquor trade.

So, why was the phased liquor prohibition initiative of the previous government scrapped? The new policy document clearly outlines two important reasons. The primary one is that the tourism sector suffered immensely in the last two years after phased prohibition was introduced. Secondly, the widespread proliferation of drugs and narcotic substances in the state has been directly attributed to the non-availability of liquor. Both the reasons, the government claims, seem to have finally pushed the government to scrap prohibition.

According to the Kerala government, tourism which contributes 20 percent to the state’s revenue took a direct hit in the two years that the old liquor policy was in force from 2014. The annual growth of tourists visiting the state had fallen from 8.1 to 7.06 in 2016 when national figures had improved from 5.9 to 10.2 percentage points. No correlation was seen by the earlier government between the decline of the number of tourists and the prohibition policy.

“We need to understand that the state is under tremendous economic stress. Last year, I had even brought out a white paper on the state’s economy. We have been deficient by some Rs 5,000 crore. To this if you do not take steps to protect a sector like tourism, we will have to cut our expenditure substantially affecting even our financial plan. So, it was in the best interest of the state that we scrapped the old policy,’’ state finance minister Thomas Isaac told India Legal.

Another sector hit by the old policy was the MICE (Meetings, Incentives, Conferences, Conventions, Exhibitions & Events). Industry figures indicate that in 2013, the sector recorded 9.1 percent annual growth, while it shrunk to 4 percent in 2014 and then dropped to a dismal 0.6 percent in 2015-16. The decline, according to the industry, was precipitated by the old liquor policy.

Kerala has made it clear that it would not go for de-notification of highways to circumvent the SC ban as many other states have done.

Kerala as a destination for “event based tourism” had taken a severe beating and with the Supreme Court asking all bars to be moved 500 meters away from the National Highway, it had actually made the situation worse. With only five-star bars allowed to serve liquor as per the previous policy, and almost all of Kerala’s five-star hotels being too close to the highways, shutting shop was the only option. With no alcohol allowed even in five-star hotels and resorts close to highways, big corporate clients started cancelling events.

International Tour operators who had been bringing such clients to Kerala every year say they are much relived by the government’s change of heart. Says Jijo Madhavapallil who runs Ashin City Tours & Travels, London: “From this year, we had re-routed all our outbound enquiries to places like Sri Lanka because the moment people know there is no liquor they will ask us to cancel the reservation. Now finally some sense has prevailed.’’

But critics say the MICE sector contributes hardly 10 percent to the revenue and surely the government cannot harp on it to justify prohibition’s reversal.

Tourism ministry officials note that the effect of the prohibition policy, had it been continued, would have been disastrous for the state which prides itself as an international tourist destination. Many go so far as to say that even the temporary setback caused by demonetisation pales before what non-availability of liquor could have done in the long term.

“By imposing partial prohibition, you were doing a huge damage to brand Kerala itself. It is such a big relief that this corrective step has been taken. Now let’s see how things play out from next season when you will see the difference,’’ Dr V Venu, principal secretary, Kerala Tourism told India Legal.

If cases registered under the Narcotic Drugs & Psychotropic Substances Act in the year 2013-14 just before the prohibition came into effect was only 847, the figure now stands at a shocking 3,835 in 2016-17. In the last six months, more than one lakh kilograms of narcotic drugs have been seized in Kochi alone. Drugs seem to have certainly taken over the state in a big way.

This is what Rishi Raj Singh, state excise commissioner, revealed recently to the media: “On the ground our officers have seen how easily drugs have become available. It is because the demand shot up dramatically after liquor went out. Also look at the crime rate in the last one year. It has only shot up compared to previous years.’’

Spurious liquor also reared its ugly head in the last couple of years. The number of cases registered for smuggling illicit liquor, spirit, arrack and toddy went up from 12,904 cases registered under the Kerala Abkari Act in 2013-14 to 25,332 in 2016-17. The Left Front has made it very clear that it would not want Kerala to go back to the “hooch tragedy days” of the 90s when more than 200 people had perished to spurious liquor. 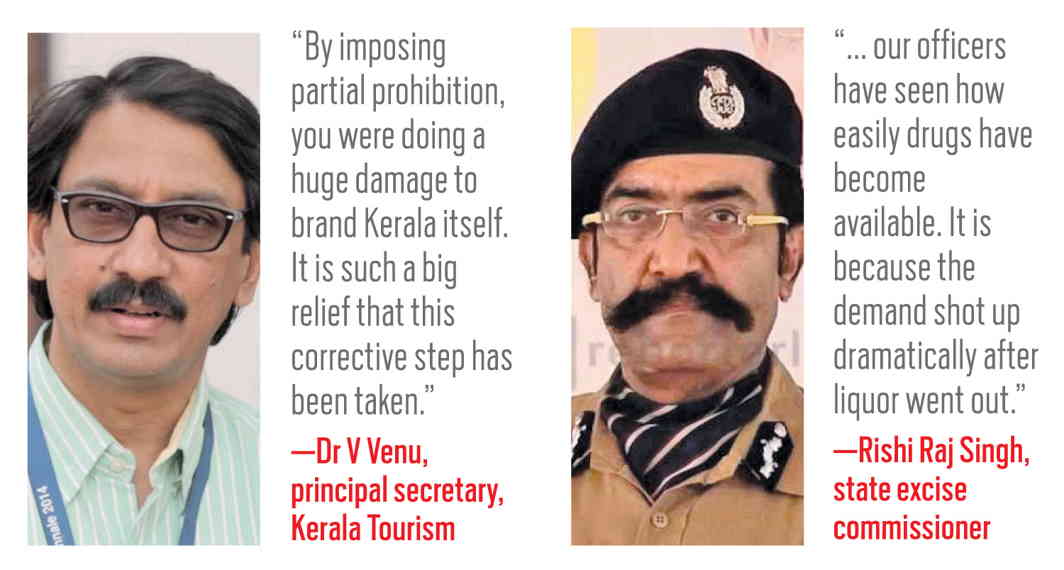 Explains LDF convener Vaikom Vishwam: “Just by decreasing the availability of liquor you can never take it out of society. What you need is huge awareness campaigns to decrease the demand and the government is committed to it.’’

Also, phased prohibition has not helped in dramatically bringing down the sale of liquor. Compared to 2010-11, sales in the last five years have only fallen by 7 percent while the sale of beer and wine—which were permitted in non-five star hotels and restaurants, went up by 80 percent over the same time period.

The state government’s new liquor policy comes at a time when the issue is in the Supreme Court vis-à-vis its directive banning bars within 500 metres of highways. Kerala has made it clear that it would not go for de-notification of highways to circumvent the SC ban as many other states have done. Rather the government has decided to allow shifting of all the bars to more convenient places.

Says Vijayan: “We want to do abide by what the Supreme Court has said. At the same time, we want to protect the jobs of those who have been working in these bars. The LDF’s liquor policy has something for everyone.’’

Meanwhile the Church in Kerala cutting across various denominations has called the government’s new policy as “an open challenge to the people” of the state. The Church had been at the forefront of the agitation demanding total prohibition and says the LDF has cheated on the mandate of the people by introducing an anti-people and regressive policy that would ruin the state.

With the scrapping of the old policy and the introduction of new norms, hotels with three-star ratings and above can now serve hard liquor in Kerala.

Notes Father Jimmy Poochakatt, spokesperson of the Syro Malabar Church, the largest denomination of Christians in the state: “Before the elections the government had promised to bring down the availability of liquor. But how do you explain that stand with such a policy? Also, when you know that alcohol is a social evil, how can any responsible government support and justify its availability merely on economic grounds?’’ Perhaps the only marginal silver lining in the government’s new policy is its decision to raise the minimum drinking age in the state from 21 to 23.

There is some good news for toddy—the traditional intoxicant of Kerala which comes from the coconut palm. The government has decided to revive the sick toddy sector by ensuring that the drink would be available at all three-star bars. Also, a revival of toddy shops across the state has been promised. The policy also promises the setting up of a Toddy Board to streamline the sector.

In the final analysis, while a section of the state is celebrating the scrapping of the old law, the prohibition lobby backed by the clergy and social activists will renew their campaign. Countering that would be a challenge for the government since Kerala also has a very serious alcohol abuse problem. That cannot be forgotten.