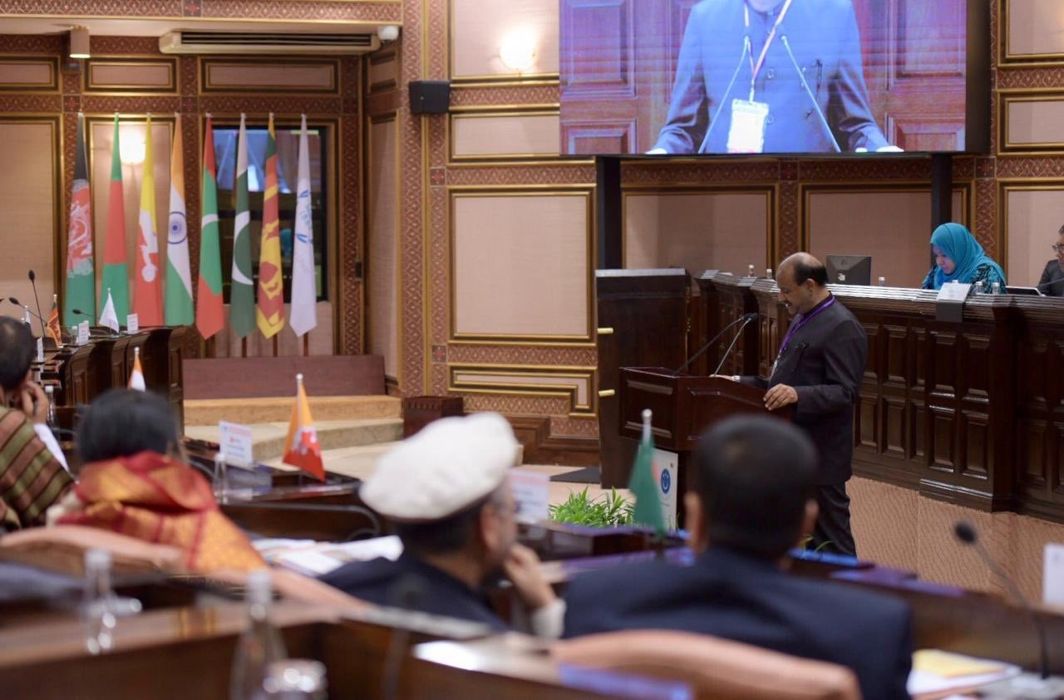 At a regional forum of parliamentarians, Pakistan once again raised its pet peeve only to get a strong rebuttal from the Indian side

The Fourth South Asian Speakers’ Summit held in Male recently became an unlikely venue for an exchange between India and Pakistan on the Kashmir situation following the nullification of Article 370.  Qasim Suri, Deputy Speaker from Pakistan, tried to raise the issue of dilution of Article 370 at this forum.  In a swift intervention, Harivansh Narayan Singh, Deputy Chairman of the Rajya Sabha from India, raised a point of order with a strong rebuttal: “We strongly object to raising the internal issue of India here and we also reject the politicisation of this forum by raising issues which are extraneous to the summit.”

The theme of the two-day Summit was “Achieving the Sustainable Development Goals” and participants from nine South Asian countries, deliberated on some of these SGDs (2030). These included nutrition, food security, promoting equality at work which included equal remuneration, creating jobs for young people and catalysing the global agenda on climate change.  The Male Declaration, understandably, ignored the unprovoked remarks of the Pakistani delegate.

It must be noted that international parliamentary conferences have the same dignity, decorum and rules of procedure and conduct of business as the parliamentary proceeding of a parliament of any country.  Thus, it can be seen that unlike any other international convention, in Male, Harivansh Narayan Singh raised a “Point of Order”, which is typical of a parliamentary debate.  There was also a very “parliamentary” demand that the intervention of the Pakistani delegate “should not be allowed to go on record” or become part of the proceedings.

It can only be wished that the Chairperson of the Speakers’ Summit had the authority or presence of mind to adjourn the proceedings for a few minutes and call the Pakistan delegation to his chamber for counselling or, alternatively, ask for the telecast of the proceedings to be switched off just as presiding officers of the Indian Parliament occasionally do to ward off unparliamentary situations.

The South Asian Speakers’ Summits began in 2016 with Bangladesh as the host.  The previous two summits were held in India (2017) and Sri Lanka (2018).  This event is sponsored by the host nation under the aegis of the Inter-Parliamentary Union (IPU).

The IPU, constituted in 1889, was the first permanent forum for multilateral political negotiations. Headquartered in Geneva, its initial objective was arbitration of conflicts. It played an important role in setting up the Permanent Court of Arbitration in The Hague. It also worked for the establishment of institutions at an inter-governmental level, including the UN. In the beginning, IPU was for individual parliamentarians, but it has since been transformed into an international organisation of parliaments of sovereign states comprising 179 member countries and 12 regional parliamentary assemblies as associate members.  Over time, its mission has evolved to encompass promotion of democracy and inter-parliamentary dialogue.

The IPU Assembly works though its Standing Committees, such as those on Peace and International Security; Sustainable Development, Finance and Trade; Democracy and Human Rights; and UN Affairs.  It also has fora on Women Parliamentarians and Young Parliamentarians. The annual calendar has a rich fare of more than 30 events organised in different parts of the world.

Each annual conference of the CPA has a theme: “Continuing to enhance high standards of performance of parliamentarians” (63rd conference, Bangladesh, 2017) and “Adaptation, engagement and evolution of parliaments in a rapidly changing Commonwealth’ (64th conference, Uganda, 2019).  A CPA conference typically works through workshops.  Thus in the 64th Conference held in Uganda, there were workshops on climate change; innovation and parliament; the role of parliament in facilitating persons with disabilities as electors; combating rapid urbanisation and the rural decline and strategies to deal with youth unemployment.

A question may well be asked: What purpose do these associations of parliamentarians serve in the context of their role and responsibilities as legislators? In order to appreciate the significance of these fora, it is necessary to look at the role and responsibilities of the Parliament in general and legislators in particular.  First and foremost, the function of parliaments and their legislators, which represent the people, is, obviously, to legislate.  The next important function of the legislatures is control over the budget.  Yet another significant function is oversight of the executive.

In order to perform these functions adequately, the legislators need to be aware of the issues, locally as well as globally, that need legislative approval and/or have to be budgeted for.  They also need to provide valuable advice to the government on issues of current and future significance in order to steer executive action in the right direction.

From the agenda of the international assemblies and conferences discussed above, it can be seen that the deliberations address not only issues related to the working of the legislative bodies, but also a wide gamut of international concerns. Many of the issues are of great significance for the survival of the human race and the planet itself.  This leads to a huge amount of capacity building of the legislators, which, in turn, contributes to the richness and quality of debate in individual parliaments of their respective countries.

For instance, on March 11, 2006, there was a well-informed discussion in the Indian Lok Sabha on the statement made by the prime minister on March 7, 2006, regarding Civil Nuclear Energy Cooperation with the US in the context of the visit of the US president. On March 12, 2010, the Rajya Sabha debated on a Private Member’s Resolution on the “Need to enhance the role of parliamentary sovereignty in the sphere of international treaties entered into by the Government of India”.  There were several other interventions during that period.

Following these deliberations, the government introduced the Civil Liability for Nuclear Damage Bill, 2010, in the Lok Sabha on May 7, 2010, which sought to create a mechanism for compensating victims of nuclear damage arising from a nuclear incident.  This was one of the last steps needed to activate the 2008 Indo-US civilian nuclear agreement. The Bill was referred on May 13, 2010, to the Standing Committee, which submitted its report to Parliament on August 18, 2010.  The Bill was passed by Parliament and became an Act after the assent of the president on September 21, 2010.

So such exchanges are important to foster peace and co-operation in the region and members would do well to remember that.

—The writer is former Secretary-General of the Rajya Sabha