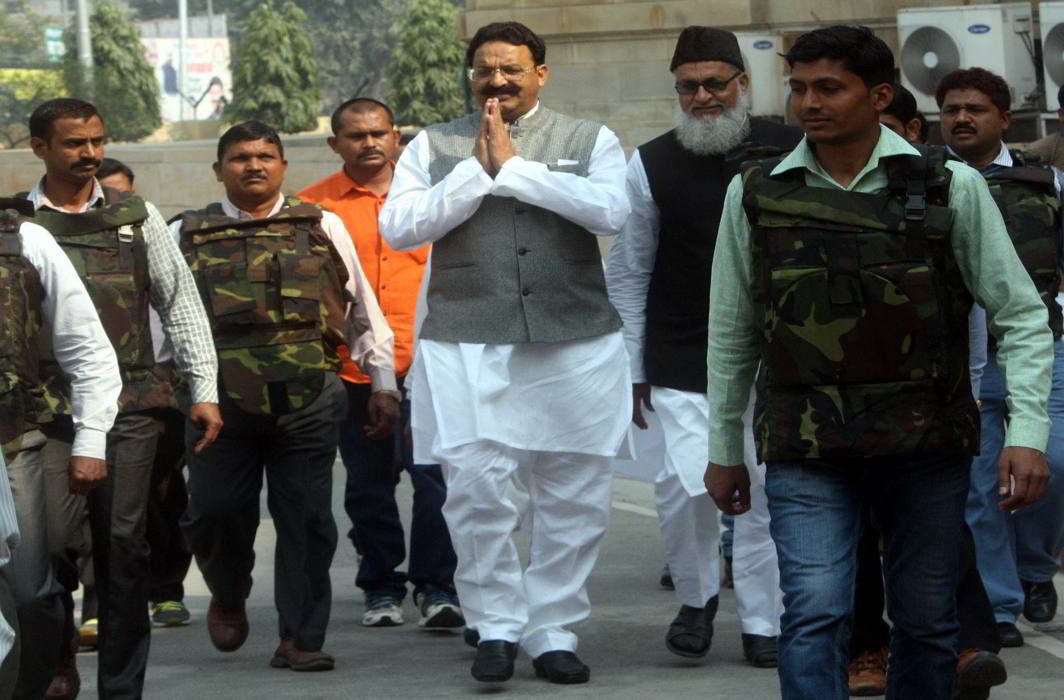 Above: Mukhtar Ansari of the Bahujan Samaj Party who is in jail was barred from voting in recent Rajya Sabha elections

In a first case in the state, two jailed MLAs, who are yet to be convicted, were prevented by the Allahabad High Court from voting in the Rajya Sabha elections under the Representation of People Act

In the recent elections to the Rajya Sabha in Uttar Pradesh, Mukhtar Ansari of the Bahujan Samaj Party (BSP) and Hari Om Yadav of the Samajwadi Party (SP), both of whom are in jail, were not allowed to vote after the government challenged their voting right under Section 62(5) of the Representation of People Act (RP Act). Ironically, Ansari had voted in the presidential poll last year. The state government has also instructed its prosecuting officers to oppose any move by incarcerated members of the legislature to attend House sessions.

This was the first time that jailed, but yet to be convicted, legislators were not allowed to vote in the Rajya Sabha elections in the state, creating an “anomalous” situation. Crying foul, the Opposition claimed that it was done to prevent the victory of Bhimrao Ambedkar, the BSP candidate and former MLA.

Justice Rajul Bhargava of the Allahabad High Court, who barred the two jailed legislators from voting, said that Section 62(5) of the RP Act also covered the election to the Upper House of Parliament and that these legislators cannot claim the right to vote as it was not a fundamental right.

The Election Commission (EC) had earlier allowed the two legislators to vote with the caveat that they should have the permission of the competent court. In Ansari’s case, a lower court in Ghazipur allowed him to take part in the Rajya Sabha poll. The government challenged the order of the lower court and the High Court ruled in its favour, citing the RP Act.

Section 62(5) of the RP Act, 1951, states: “No person shall vote at any election if he is confined in a prison, whether under a sentence of imprisonment, or transportation or otherwise, or is in the lawful custody of the police. Provided that nothing in this sub-section shall apply to a person subjected to preventive detention under any law for the time being in force.”

This Section was found anomalous by a senior officer familiar with the RP Act and also with the Rajya Sabha and legislative council elections because of a proviso which was added after an amendment in 2013. Parliament introduced a proviso to Section 62(5) in the RP (Amendment and Validation) Act, 2013, which says: “…by reasons of the prohibition to vote under this sub-section, a person whose name has been entered in the electoral roll shall not cease to be an elector”. That leaves one with a situation in which a jailed legislator can contest an election but cannot take part in House proceedings or claim voting rights in Rajya Sabha or legislative council elections if barred by a court until the government amends the RP Act to bar all chargesheeted legislators from politics.

The officer said that, unlike Lok Sabha elections, the electoral college in a Rajya Sabha poll is small and exceptions should be made “otherwise, it will affect the poll outcome”. He said that the language of Section 62(5) needs to be revisited.

Ansari is in jail as the main accused in the murder of BJP MLA Krishnanand Rai. A legislator from Mau’s Sadar seat, Ansari has been in jail since 2005. In 2003, he was convicted under the Terrorist and Disruptive Activities (Prevention) Act, but his conviction was set aside in 2005 by Justices BN Agarwal and CK Thakker of the Supreme Court. Hari Om Yadav, on the other hand, is accused of attempt to murder and is lodged in Firozabad jail.

In view of the High Court’s order, the participation of Ansari and Yadav in the elections to the legislative council due in April is also in doubt. The state’s principal secretary, home, Arvind Kumar, told the media that all prosecuting officers in the state have been directed to oppose applications of jailed legislators seeking permission from the court to attend assembly sessions.

Kumar cited a High Court order of May 4, 2009, in Shekhar Tiwari versus State of Uttar Pradesh in which the Court had ruled that the petitioner (Tiwari) who was detained in prison by a lawful order could not claim writ of mandamus for participation in assembly proceedings. Shekhar Tiwari, a BSP MLA from a constituency in Auraiyya, was in jail for murder. Kumar also quoted a Madras High Court order to claim that jailed legislators did not have any legal right to seek relief from the Court on the pretext of attending the House.

By deciding to prevent jailed legislators from attending the House, the UP government has indirectly supported the EC’s effort to cleanse politics of criminals. In February this year, the EC had approached the Supreme Court with an affidavit seeking amendment to the Representation of People Act to bar politicians chargesheeted in criminal cases which are punishable by at least five years’ imprisonment from elections.

The EC affidavit requested the Court to issue directions to the centre to am-end the law to cleanse the political system of criminals. At present, a politician can be barred from elections only if he has been convicted.

While the centre was still finding it difficult to bell the cat, the Uttar Pradesh government made a beginning of sorts by not allowing these two jailed legislators to take part in the Rajya Sabha elections as electors. But whether this move was aimed at cleansing the system or for short-term gain remains to be seen.