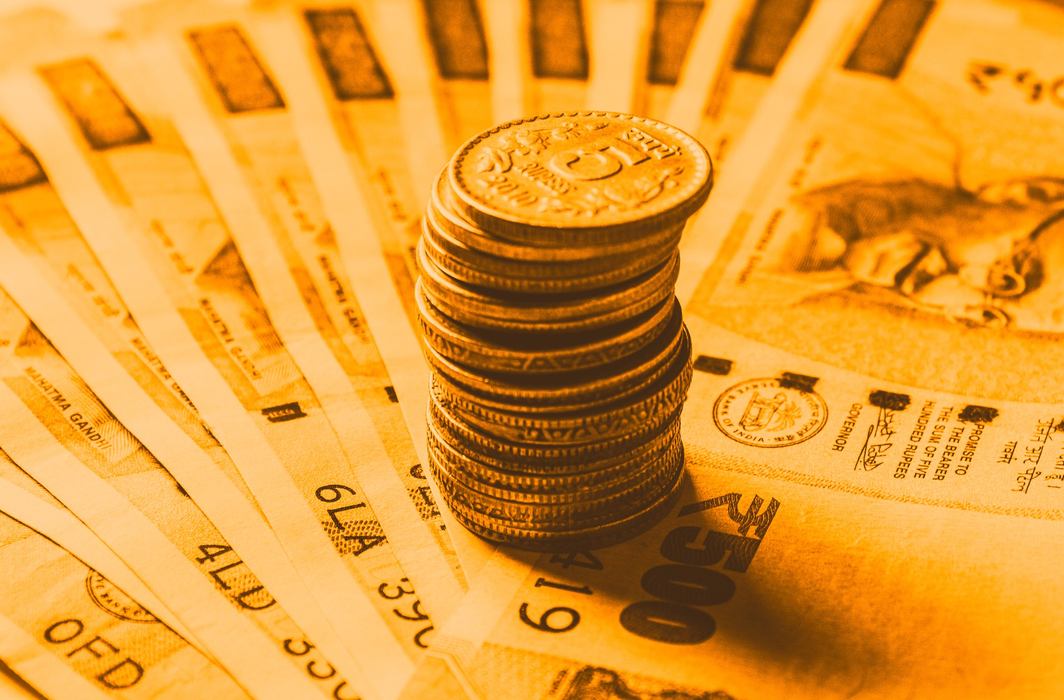 Above: Image by Free stock photos from www.rupixen.com from Pixabay

A thriving free market economy needs strong and independent judicial institutions and a legal framework which can enforce contracts and safeguard rights. This is missing in India

By Sanjai Bhagat and Sanjiv Bhatia

A recent report, the India Justice Report, 2019, published by Tata Trusts, ranked 18 large and mid-sized states in relation to their capacity to deliver access to justice. The ranking assessed the four “pillars” of the justice system—police, prisons, legal aid and the judiciary—in each state. Each cog is vital for the rule of law to work efficiently.

None of the states scored over 60 percent on justice delivery. And unsurprisingly, the states that have high economic growth scored better than the poorer states. Figure 1 shows the rankings of each state in its ability to provide an effective justice system and its corresponding GSDP (gross state domestic product) ranking. There is a strong correlation between a state’s economic prosperity and its judicial system.

The relationship between economic prosperity and the rule of law has been emphasised by Indian thinkers since ancient times. Kautilya, an Indian philosopher and royal advisor, wrote in his 4th century BC political treatise, the Arthashastra: “The Rule of Law and maintenance of order is the science of governance.” Kamandaks in his book on political thought, Nitisara, wrote: “No branch of knowledge and policy is of any avail if the Rule of Law is neglected.” 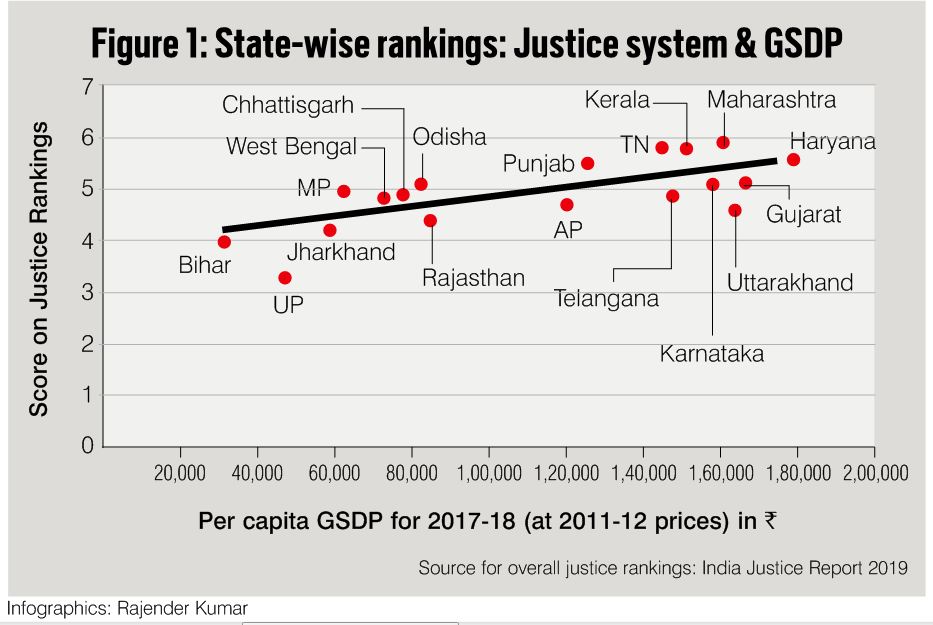 There have been many reasons put forward to explain the slowdown in India’s economic growth and the rate of job creation. The popular and financial media repeatedly focus on lack of bank financing, poor and inadequate infrastructure and the quality of education as the leading causes of the economic slowdown. While the above three concerns are important, they are the symptoms and not the underlying cause of the slowdown. To jumpstart India’s economic growth and job creation, we must first correctly diagnose the underlying cause.

Figure 2, based on the Madison Project Database, illustrates the share of world GDP by select countries and regions for the period, 1820-2016. Today, the US has the highest percentage of the world GDP compared to other countries. In 1820, the situation was quite different; China accounted for a third of the world GDP, India a sixth and the US barely registered. So why are there such different economic growth rates for the US, India and China during the past two centuries? Free market capitalism is now well-accepted to be the primary reason for these discrepancies in growth. What is ignored is the fact that rule of law is an indispensable foundation of a free market economy because it protects private ownership of assets which is essential to capitalism. The rule of law fosters transparency in business transactions and encourages investors to provide capital that creates jobs and promotes prosperity. 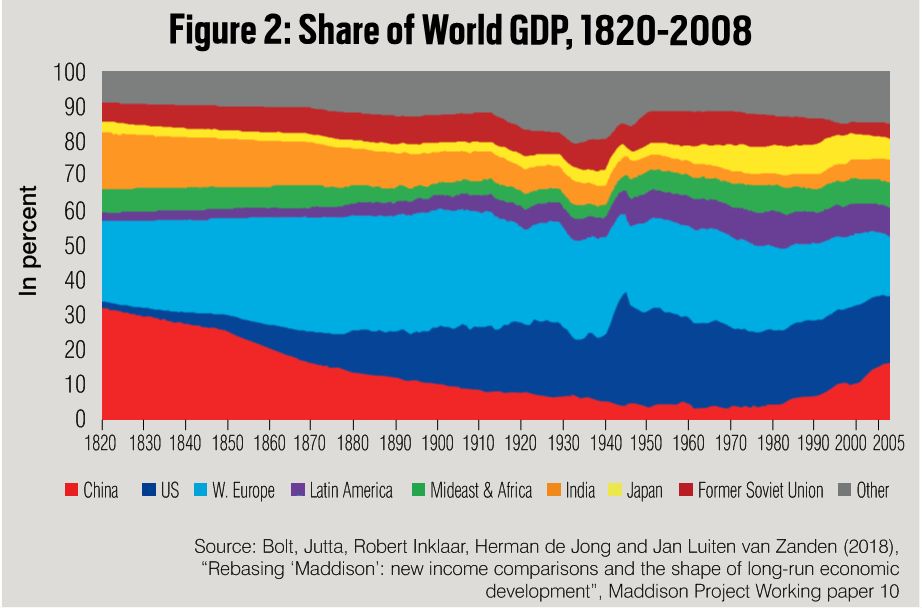 The economic growth of a country is the sum total of all transactions that take place. In a free-market economy, the government plays a minimal role, and the vast majority of transactions are voluntary between private individuals. And key to the success of these transactions is the enforcement of contracts between the parties. When disputes arise, the legal system needs to provide a systematic and expedient approach for the resolution of differences. A well-established, clear and consistent rule of law provides an atmosphere of predictability and minimises disputes.

India continues to lag in enforcing contracts and has had no improvement in its global ranking on this critical factor. In the 2018 Ease of Doing Business rankings, India ranked 163rd on the efficiency with which contracts were enforced. This is a significant detriment to the growth of the transaction mechanism that drives economic growth. It takes on average 1,445 days to resolve a commercial dispute through a local first-instance court, almost three times the average time in OECD high-income economies. This adds an unnecessary cost to doing business and destroys trust. 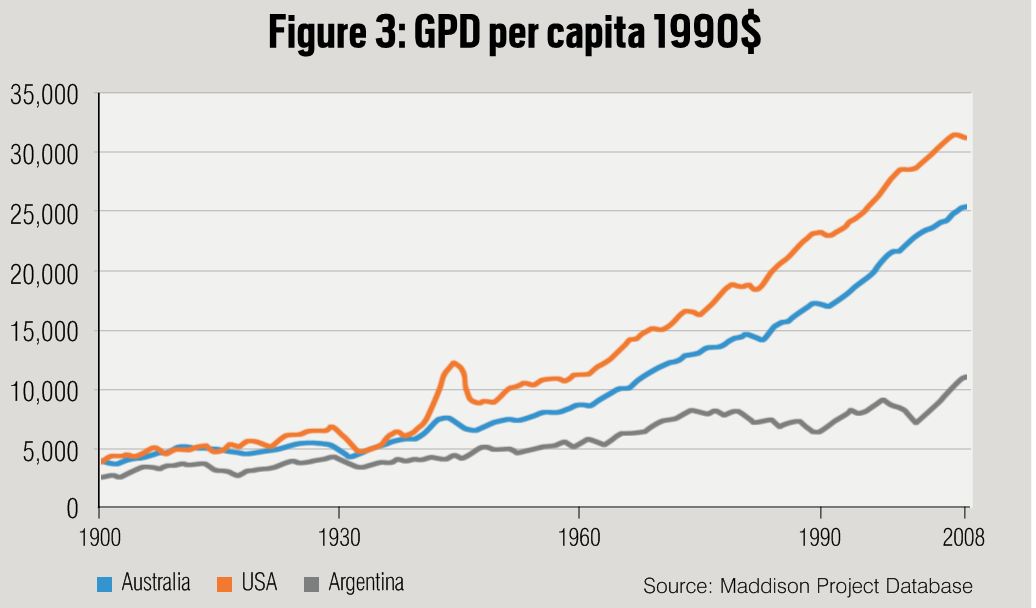 Since Adam Smith, economists have focused on the role of independently functioning institutions in promoting economic growth. Nobel laureate Douglas North provides a useful definition of such institutions: “Institutions are the humanly devised constraints that structure political, economic and social interaction… Institutions provide the incentive structure of an economy; as that structure evolves, it shapes the direction of economic change towards growth, stagnation, or decline.”

Economic institutions involve the rule of law, including control of corruption and enforcement of private property rights. The World Bank defines the rule of law as the extent to which citizens have confidence in and abide by the rules of society, and in particular the quality of contract enforcement, property rights, the police and the courts, as well as the likelihood of crime and violence. 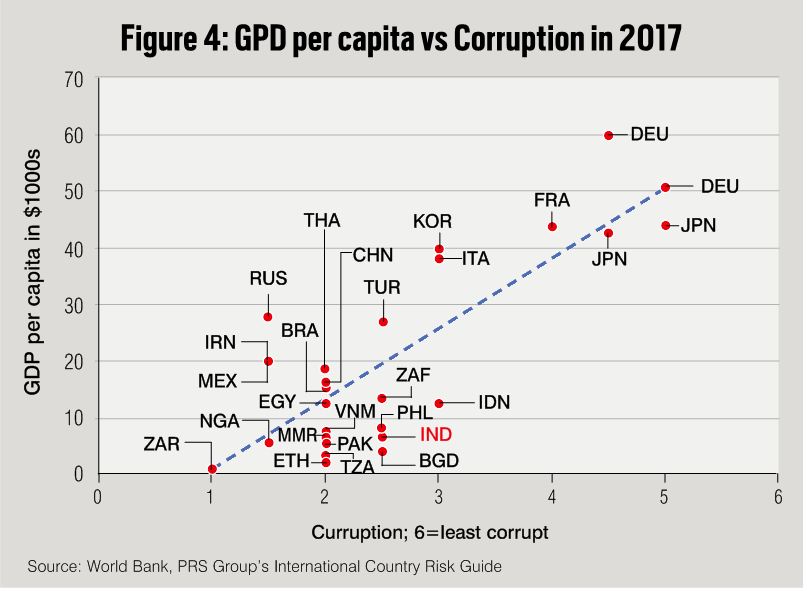 Figure 4 deals with the relation between corruption and GDP per capita. Countries with lower levels of institutional corruption are more prosperous than those with high corruption levels.

Consider one of the key symptoms of India’s slow economic growth: lack of bank financing. Most of the banks and banking resources are owned by the public sector. The problem is not one of adequate financing, but of poor and corrupt lending decisions made by managers influenced directly and indirectly by the political bosses. These corrupt lending practices end up costing Indian taxpayers billions. Just in the first six months of the 2019 fiscal year (April-September), India’s public sector banks reported frauds totalling $13 billion.

Worse, these frauds add a significant risk premium to the cost of capital as a result of which Indian banks have among the highest intermediation cost (almost 560 basis points) in the world. This has direct consequences for economic growth, and it all results from a breakdown in the rule of law. Despite bank frauds totalling more than $100 billion over the last ten years, no politician or senior bank executive has been indicted or convicted.

Numerous studies have investigated the causes and measured the consequences of differences in corruption among countries. They find a significant inter-relationship between legal (in)effectiveness and various measures of corruption. This re-enforcing inter-relationship suggests that corruption is a persistent phenomenon which can only be reduced by having an effective legal system which preserves the rule of law. You need umpires, and you need people who can enforce contracts coercively if need be, without which it would be a jungle. Honest police and judges are vital to a nation’s prosperity.

A major obstacle to the rule of law in India is the problem of over-legislation and state overreach, which ends up empowering only those who are able to game the system. The result is an unwieldy and often arbitrary surfeit of laws and regulations that by their sheer volume stifle individual freedom and entrepreneurship yet leave a lot of power in the hands of the political class.

This fact was alluded to recently by Dr Manmohan Singh, the architect of India’s liberalisation in 1991. “The functioning of any economy is the result of the combined set of exchanges and social interactions among its people and institutions,” Singh wrote in a recent article. “Mutual trust and self-confidence are the bedrock of such social transactions that foster economic growth. Our social fabric of trust and confidence is now torn and ruptured because of distrust among citizens in the society’s  institutions.” Singh went on to blame the “palpable climate of fear” especially among businesses which was resulting in a decline in business investment.

While not directly mentioning the rule of law, it is clear what Singh was implying. The economy doesn’t exist in a vacuum—you need rules of the game, and it is the job of the government to create institutions to ensure that the rules are fairly and equally applied to all participants. This ensures that transactions, investment and risk-taking can proceed with minimal costs and friction. That is currently not happening in India. Unfair regulations applied selectively, unclear and capricious tax policy especially as it relates to GST, and the bogeyman of “black” money, have created a climate of uncertainty among investors and businesses who fear harassment by government authorities. Combine this with corruption, the risk of expropriation and sectoral violence and it is not hard to understand why the Indian economy is in a deep structural slide.

How can things be turned around? There are the obvious fixes: increasing rural incomes and demand, lowering the cost of capital, improving liquidity in the economy, and streamlining tax policies. But all these fixes cannot be applied successfully without understanding the relationship between economic growth and the rule of law. Strong and independent judicial institutions are vital to India’s future prosperity because effective market relations can exist only in a legal framework which safeguards property and non-property rights.

The role of the legal profession is, therefore, vital to India’s economic future. A clear, concise and fair rule of law applied consistently, equally, and expediently is the vital cog missing from India’s growth story.