The investigation has taken an unexpected twist with a senior student being arrested. Why did the Gurugram police charge the wrong person and what happens to him now? Have schools done enough to beef up security since the incident?

No one thought it was possible but the Ryan International School murder just got ghastlier. In a stunning twist to the case, the CBI has arrested a Class XI student of the school located in Bhondsi, Gurugram, for the murder of seven-year-old Pradhyumn Thakur, a Class II pupil of the same school. The 16-year-old has confessed to the crime. He has been produced before the Juvenile Justice Board which will now take a call on whether to treat him as a major or minor under the amended JJ Act (2016).  It serves as a grim reminder of the Aarushi Talwar case in which the investigators pinned the murder on the parents who were finally acquitted with the courts coming down heavily on the investigators for a shabby job.

In the Ryan case as well, the CBI has accused the Haryana Police of framing bus conductor Ashok Kumar by extracting a confession from him under duress. It has also accused the police of destruction of evidence. The police failed to seal the murder spot and though it found a second knife, it never mentioned it. The media has claimed that Haryana DGP BS Sandhu was in cahoots with the school management, Ryan, Augustine and Grace Pinto, and the father of the accused, who is a senior advocate, a member of the Haryana Bar Association and owner of 500 acres.

Pradhyumn was found inside a toilet of the school with his throat slit on September 8. Footage from a second CCTV has shown the arrested teenager entering the toilet with a knife, the CBI has said. The first CCTV showed a badly injured Pradhyumn crawling out of the toilet. The murder weapon was found at the bottom of the commode where the accused had dropped it and unsuccessfully tried to flush it. It was not found in the possession of the bus conductor, Kumar, as the Haryana Police had claimed. Kumar’s family has decided to file a case against the police.

The boy allegedly committed the murder in order to defer the school examination and a parent-teacher meeting as he was weak in studies. It has also become known that he was under psychiatric treatment. The CBI has also ruled out sex as the motive in the case, contrary to the police version. It had taken over the probe on September 23, after repeated appeals from Pradhyumn’s father, Varun Thakur, for a fair investigation in the case.

“My son is innocent. It was he who informed the gardener and teachers of the injury to Pradhyumn. Besides, he was not present at the spot of the crime when it took place and was writing the exam. We are being framed,” the father of the accused had initially said. However, a day after the arrest, the CBI reported that the teen had confessed before his father that he killed Pradhyumn.

DGP Sandhu, too, had put on a brave face. Even while debate raged in the media on whether or not he should be sacked as punishment for botching up the investigation, he told reporters, “Koi baat nahin. Let the CBI investigate the case. Once the probe is complete, the truth will come to the fore.”

Chief Minister Manohar Lal Khattar, too, has been batting for the Haryana Police, sparking speculation about complicity as the Pintos are known to have been close to the ruling BJP. “Haryana police had not completed its investigation. When investigations were on, a demand was raised that the matter be handed over to the CBI. It was handed over to them. CBI is now conducting investigations. It is their job, not ours,” Khattar had said.

As a response to the horrific crime, first the CBSE and then the human resource development and the women and child development ministries issued guidelines to keep schools safe. Compliance with these suggestions has been mixed. While schools like the Delhi Public School and School of India have recently introduced radio frequency identification cards which monitor children’s entry and exit to and from campuses and send out SMS alerts to parents as soon as they leave the premises, there are reports that other private schools are reluctant to put staff through psychometric tests as stipulated in the guidelines.

Post the Ryan incident, schools like Don Bosco Alaknanda now require parents to state in writing if their wards avail of private transport to commute. Others, such as DPS, are a little more lenient; here, students can decide to leave the campuses using private vehicles, but they, too, must write to the authorities to inform them before they do so. 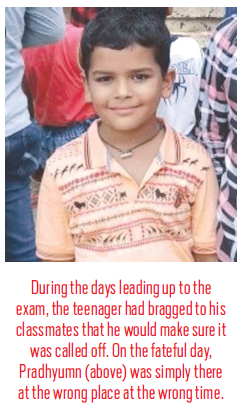 The safety requirements include, among others, installation of CCTV cameras, security audit of premises, police verification of outsiders, hiring of support staff via authorised agencies only, training of staff to prevent abuse and setting up of a parent-teacher-student committee, a grievance redressal committee and a committee under the Protection of Children from Sexual Offences Act. When India Legal called up New Green Field School in Alaknanda, New Delhi, to check whether these measures were being followed, Vice-Principal Nidhi Chauhan refused to comment.

What will the Juvenile Justice Board consider when deciding whether Pradhyumn’s killer will be treated as a major or a minor in the case? National Commission for Protection of Child Rights member Yashwant Jain believes the fact that the murder was planned and cold-blooded will play a deciding role in the case.

“Had it been an accident or an act perpetrated in the heat of the moment, the Board might have chosen to treat him as a child. But the accused was fully aware of the consequences of his actions and showed the mental ability of an adult insofar as knowledge as well as planning of the act are concerned,” Jain told India Legal.

A preliminary decision will be taken by the JJB at the end of the three-day CBI remand of the accused after which he will be sent to a place of safety. But the JJB will take at least two-three months to arrive at a final conclusion in this regard, Jain said. It will take the help of child psychologists and other experts for this purpose and will document all grounds for its decision, he said. As there are no guidelines on this even though states had been asked to formulate them, it will be the first precedent. Should the boy be tried as an adult under Section 302 of the Indian Penal Code for murder, the case will go to the sessions court where this document will be referred to by the judge before continuing with the trial.

However, as Soha Moitra, regional director of NGO Child Rights and You, maintains, “The case is still under investigation, and we must take care that the boy is not unduly stigmatised as happened with Ashok Kumar. That being said, we must also introspect as a society. Think about what might have been going through the child’s mind. How are we dealing with our children? Why do children become bullies? What kind of socialisation are we providing them? Are they being given any vent-out points and a holistic upbringing, or are we focussed solely on their careers to the exclusion of everything else?”

Nevertheless, her words do little to ease the sense of foreboding in schools since the CBI has found there were others, presumably children, who helped the perpetrator, if only by keeping quiet about his plans when they had knowledge of them. During the days leading up to the exam, the teenager had bragged to his classmates that he would make sure it was called off so they needn’t prepare for it. On the fateful day that the killer chose his victim, Pradhyumn was simply there at the wrong place at the wrong time.

If the CBI version is true, it could have been any innocent young student who needed to use the washroom. For parents of schoolchildren, the arrest of a senior student in the shocking murder case is hardly a sign of closure, nor does it reduce their anxiety over the safety of their children.