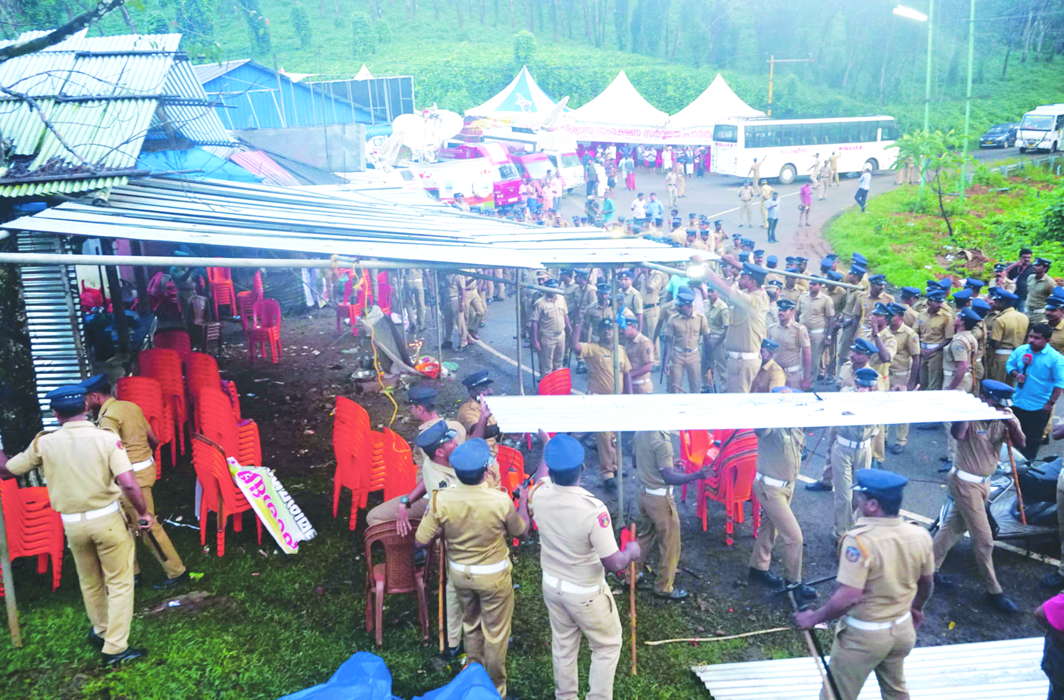 Above: Police trying to manage the protests over entry of women devotees to Sabarimala/Photo: UNI

As Kerala erupts in fury over the SC verdict allowing women of all ages to visit the holy shrine of Lord Ayyappa, political parties have jumped into the fray, muddying the legal waters

For devotees, Sabarimala, the hill shrine of Lord Ayyappa, is a holy place where everyone, irrespective of caste, creed or religion, can go freely to worship. They now wonder how politicians, interest groups and detractors of the Hindu faith could distort facts to make the apex court deliver a verdict that literally turned a serene hill shrine into a war zone. And on October 17, the day the shrine was opened, sporadic violence broke out in various parts of Pathanamthitta, the district in which the shrine is located.

As the turmoil over the Supreme Court’s historic ruling allowing entry to women of all age groups in the shrine reaches a flashpoint, it is the believers who are at the receiving end with all other players aiming to gain something for themselves.

For the last few centuries, the temple, located inside dense forests on the Sahya mountain ranges, was in hostile terrain, surrounded by wild animals. Very few devotees visited it in the Mandala and Makaravilakku season from November 16 to January 14. Even in the early 1950s, only around 1,000 devotees offered prayers on the occasion of Makaravilakku. Lack of transportation and the tough terrain made it almost impossible for women devotees to set out for the pilgrimage.

Custom had it that only women below 10 years of age and above 50 years were to be allowed into Sabarimala. But there have been a few instances of influential people managing to take their womenfolk, in the reproductive age group, to the temple during the off-season to perform some rituals. There was also one instance of a film shooting at Sabarimala Sannidhanam. Citing these aberrations, the Kerala High Court banned women in the reproductive age group from entering the Sabarimala temple.

But when the issue came up before the constitution bench of the Supreme Court, the CPI(M)-led LDF government, which is rooted in atheist ideology, used the opportunity to ensure that the ban was lifted. But the Travancore Devaswom Board (TDB), constituted to protect religious customs and traditions besides general administration of temples, also did not act as expected to protect the custom.

TDB president A Padmakumar, a former CPI(M) MLA, had no option but to toe the line of the chief minister, Pinarayi Vijayan, who treated the lifting of the ban as an opportunity to prove his government’s progressive outlook. It is a fact that 99 percent of true believers among women would not venture to go to Sabarimala. But the government wants to be known for standing firm in bringing young women to Sabarimala under the cover of complying with the Court order. 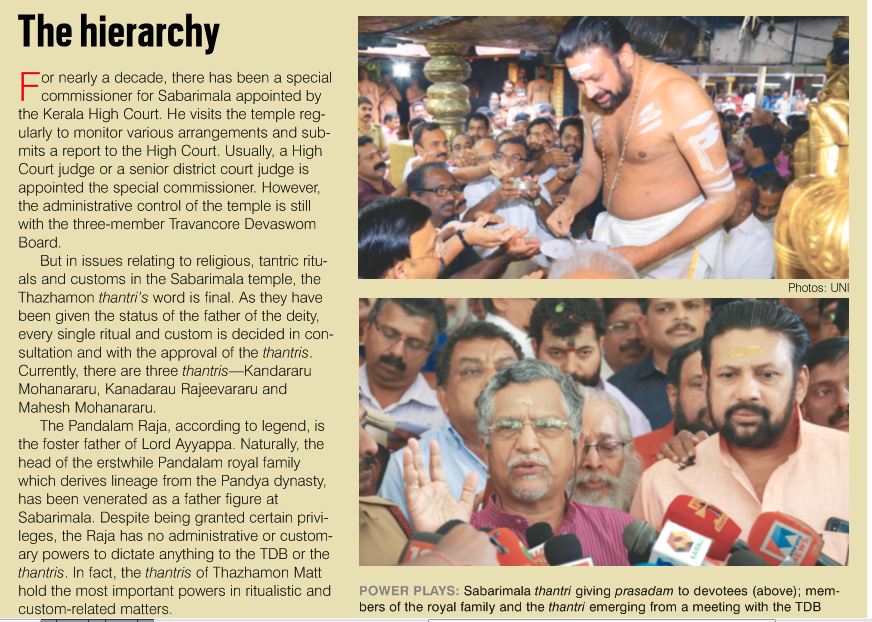 This contentious issue also has political ramifications. With the Lok Sabha election barely six months away, the Supreme Court order has led to a socio-political churning with communal equations heading for a major realignment. The influential Nair Service Society (NSS) has positioned itself at the forefront of the protest against the government’s move to implement the Court order. Thousands of people, mostly women, are participating in massive rallies taken out against the LDF government.

G Sukumaran Nair, the general secretary of the NSS, has played a crucial role in transforming the Sabarimala issue into a burning political one by bringing the thantri’s (head priest) family and the erstwhile Pandalam royal family into its fold. It was as per the NSS leadership’s advice that the Sabarimala thantris rejected the chief minister’s invite for compromise talks on implementing the apex court’s order.

The three thantris and the royal family representative, Sasikumara Varma, had met Nair at the NSS headquarters before taking the decision not to accept the chief minister’s invite. “The government might have some limitations in filing a review petition. But how could the TDB which came into existence pledging to protect temple customs and practices shy away from filing a petition? Why isn’t the government allowing the TDB, which is an independent organisation, to file a petition?” asks Nair.

Meanwhile, the predominant Ezhava community led by the Sree Narayana Dharma Paripalana (SNDP) Yogam has not come out officially to protest against the government. General Secretary Vellappally Nateshan has made it clear that the SNDP Yogam will not participate in the protest, though they support the devotees’ demand. As of now, the SNDP Yogam general secretary is the only high-profile leader from the Hindu communities criticising the street protest. At the same time, his son, Thushar Vellappally, was at the forefront of the BJP’s long march in his capacity as president of the BDJS, an alliance partner of the NDA.

Though the issue has the potential to literally turn the entire state into a war zone, the arrogant attitude of the chief minister is obliterating any chance of a mutual dialogue, though he had invited the stakeholders for talks. The compromise talks convened by the TDB on October 16 had the attendance of all the main stakeholders—the thantris, representatives of the erstwhile Pandalam palace and believers such as the Ayyappa Seva Sangham, Ayyappa Seva Samajam and Yogam Kshema Sabha. But, giving a clear signal to the TDB office-bearers, the chief minister stated in unequivocal terms that the government would not issue any review petition or enact legislation to ban the entry of young women.

Earlier, the TDB president, A Padmakumar, had stated that no women from his family would go to Sabarimala. He also said that the TDB would file a review petition. But what followed was the chief minister’s open censure of Padmakumar. Under the given circumstances, Padmakumar had no option but to toe the chief minister’s line. The TDB’s flip-flop provoked the devotees and they came out in large numbers to protest.

Seeing that the NSS-led faith protection rallies had caught the attention of a majority of women of all ages, Sangh Parivar outfits like the Hindu Aikya Vedi, the VHP and the Kshethra Samrakshana Samithi also came to the fore in galvanising the protest. However, a sudden U-turn by the state BJP unit surprised many. Initially, it was reluctant to come out strongly against the court verdict as the RSS national leadership had favoured the entry of young women into Sabarimala. But seeing the massive rallies of women devotees, the BJP leadership had to change its stance.

Moreover, for the first time, the Congress leadership, especially Opposition leader Ramesh Chennithala and others such as K Muraleedharan and K Sudhakaran, came out in support of the devotees. The BJP had no option now but to jump into the fray and act like it is championing the cause of the devotees. In the process, it stole the limelight. Its long march over October 11-15 from Pandalam, the birthplace of Lord Ayyappa, to Thiruvananthapuram became a game-changer. The march, called Viswasa Samrakshana Yatra (Faith Protection Yatra), culminated in front of the secretariat in a show of strength.

Despite the huge turnout in the BJP and NSS rallies, there was no climbdown on the part of the government. Instead, the state DGP, Loknath Behra, repeatedly stated that the police would take strong action against those who tried to stop young women wanting to go to the temple. 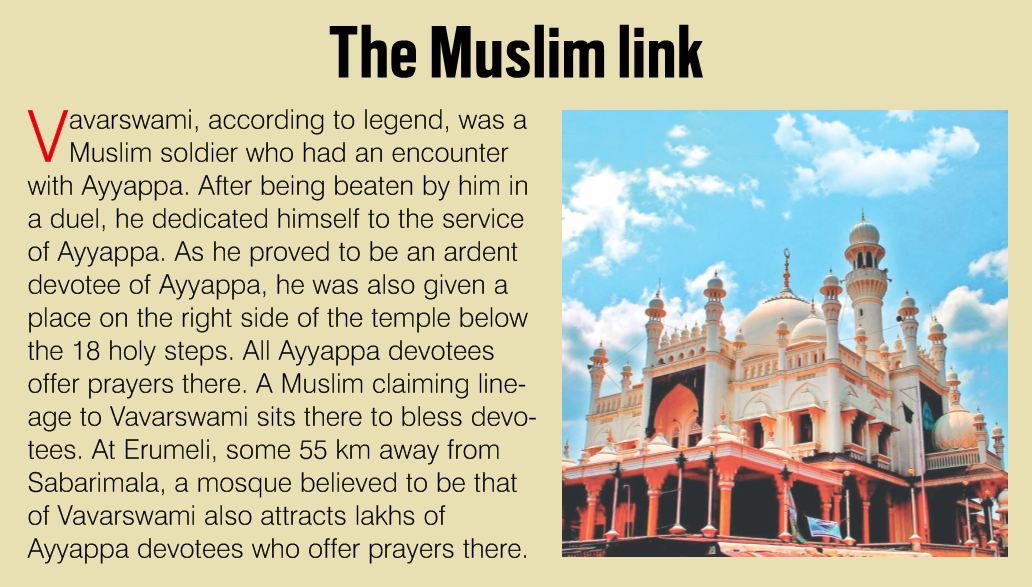 Apparently, taking a cue from the chief minister and the DGP, some women in Kannur, the heartland of the CPI(M), announced that they would go to Sabarimala after observing vrata (vows) for 41 days. But on October 17, when the Sabarimala temple was opened for monthly puja, a six-member team from Andhra Pradesh led by a young woman came to Sabarimala. Though she was dissuaded by protesters at Nilakkal, a base camp of Sabarimala, the police escorted them to Pamba, eight kilometres away. But later, the protesters intimidated her and forced her to return. With this, the nearly 1,000-strong police force, deployed under an ADGP and IG, started provoking the protesters by demolishing a pandal erected for the protest at Nilakkal. Several protesters, including former TDB president Prayar Gopalakrishnan and members of the thantri family, were arrested and removed from the scene of the protest.

As the government remains adamant about implementing the Court order, there is all likelihood of some women devotees being taken to Sabarimala before the five-day puja ends on October 22. But it is certain that any attempt by the police to use unreasonable force on the protesters will lead to clashes not only in Pamba and Nilakkal, but would turn the state into a war zone.

So, what are the legal options? Instead of paving the way for bloodshed, the government can cite law and order issues involved in complying with the court order and seek a temporary stay. The Pathanamthitta district magistrate can issue a ban under Section 144 of the CrPC to maintain law and order and simultaneously ban the entry of women.

Speaking to India Legal, TG Mohandas, the intellectual cell convener of the BJP, who personally moved the Supreme Court seeking to liberate the temples from Devaswom Boards, said: “Law and order risks are a valid reason for the government to defer complying with the Court order. Once you get a breather, the stakeholders can seek a temporary stay on the verdict.”

While the state government has already made it clear that it cannot enact legislation, as it had told the Supreme Court that whatever the verdict it would implement it, the centre can enact an ordinance. But BJP state secretary JR Padmakumar pointed out that as the administration of the temple is a state subject, the centre cannot issue an ordinance or enact a new piece of legislation.

However, CPI(M) leaders feel that the BJP’s stand is misleading and they should approach the centre for promulgating an ordinance and enacting a law. Mohandas said that in the event of the state government not attempting to enact a law, the centre can try such an option, though it will have major repercussions.“The centre cannot enact a law applicable only to the TDB. Otherwise, it can make a legislation applicable throughout the country. Another option is the taking over of the temple by the central government. In that case, the state government will complain that the centre is encroaching into its territory,” he said.

While the chief minister rejected the idea of a review petition or enactment of legislation, the TDB held a discussion with some of the stakeholders of Sabarimala only to give the impression that it had received a free hand to go ahead with efforts to evolve a consensus. “Those young women trying to come to Sabarimala only want instant fame. No true believer would come to Sabarimala, breaching the customs and practices of the temple,” Padmakumar said. But the TDB could not concede any of the demands of the temple thantris and members of the Pandalam royal family. “As the TDB wanted more time even to consider the proposals, there was no point in participating in the discussion,” said Varma, the Pandalam royal family representative, boycotting the meeting.

Obviously, Sabarimala has become a temple of discontent for now.