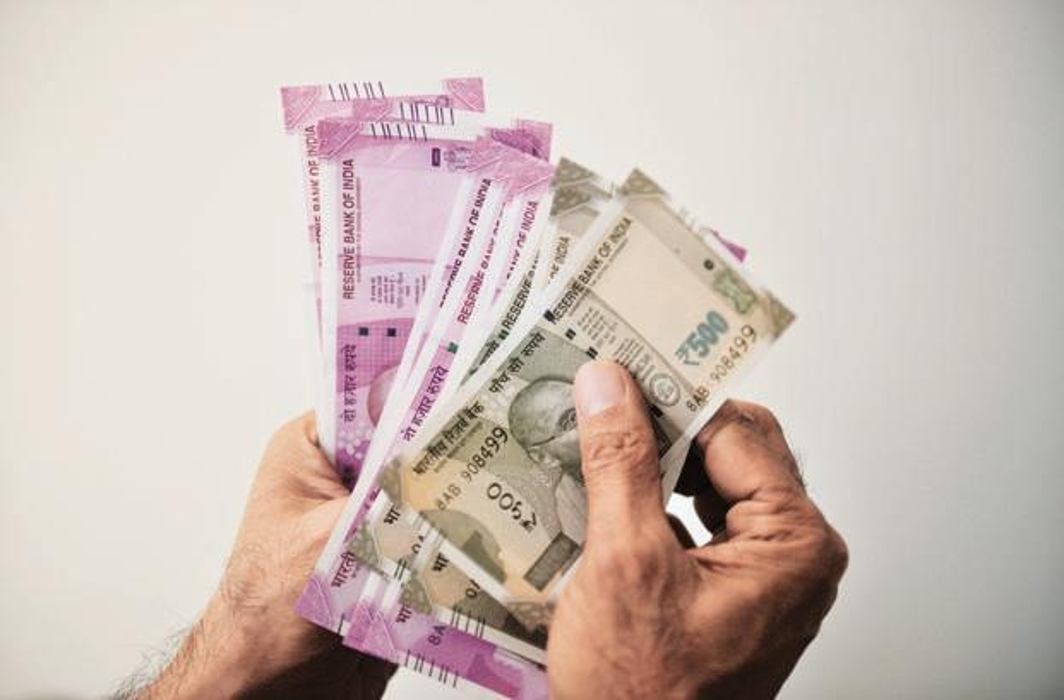 India’s attempt to spur the economy by rupee devaluation has come a cropper. It’s time the RBI made it a fully convertible currency, resulting in lower inflation and interest rates

Despite India being the fastest growing economy in the first quarter of 2018, its currency has been Asia’s worst-performing currency this year, losing more than 10 percent of its value against the US dollar since January. If India is getting stronger economically, why is the currency not reflecting that? If the rupee today is buying half as many dollars as it did in 1991, what economic progress has India made?

Old-school economists, many of whom have no experience in financial markets, keep pushing the conventional wisdom that a weaker currency promotes economic growth through an increase in exports. However, this position is foolhardy and supported by neither economic theory nor recent empirical evidence.

Recent depreciations in the Indonesian rupiah, Brazilian real, Japanese yen and Chinese RMB have all resulted in lower levels of exports and weaker economic growth. Despite a 15 percent depreciation in the Indian rupee since 2014, exports have dropped both in absolute terms and relative to Gross Domestic Product (GDP).

David Ranson, an economist with economics research powerhouse H.C. Wainwright & Co., studied the relationship between currency devaluations and GDP growth for 19 countries between 1980 and 2012. His findings are clear—to slow down economic growth, call for a currency devaluation.

There are two reasons for this. Firstly, a weaker currency makes imports more expensive. This can be extremely detrimental for countries like India where energy imports are the largest component of total imports.

Expensive energy imports push up the cost of everything else in the economy, resulting in inflation. The doubling of inflation from 2011 to 2016 in Brazil and the recent rise in Turkey are examples of this “cost-push inflation”. And when inflation increases, so do nominal interest rates. This, in turn, affects credit markets and economic growth. This is even more so in a country like India where the Reserve Bank of India (RBI)’s interest rate policies are tied singularly to inflation.

The second way a weak currency affects economic growth is through financial transactions. There are two sides to a country’s international linkage. Trade transactions are just one side. Countries are also linked to each other through financial transactions. Both the Indian government and large domestic companies borrow aggressively in overseas markets to take advantage of the lower costs of borrowing. A weaker rupee is extremely detrimental to them because it increases the cost of borrowing. 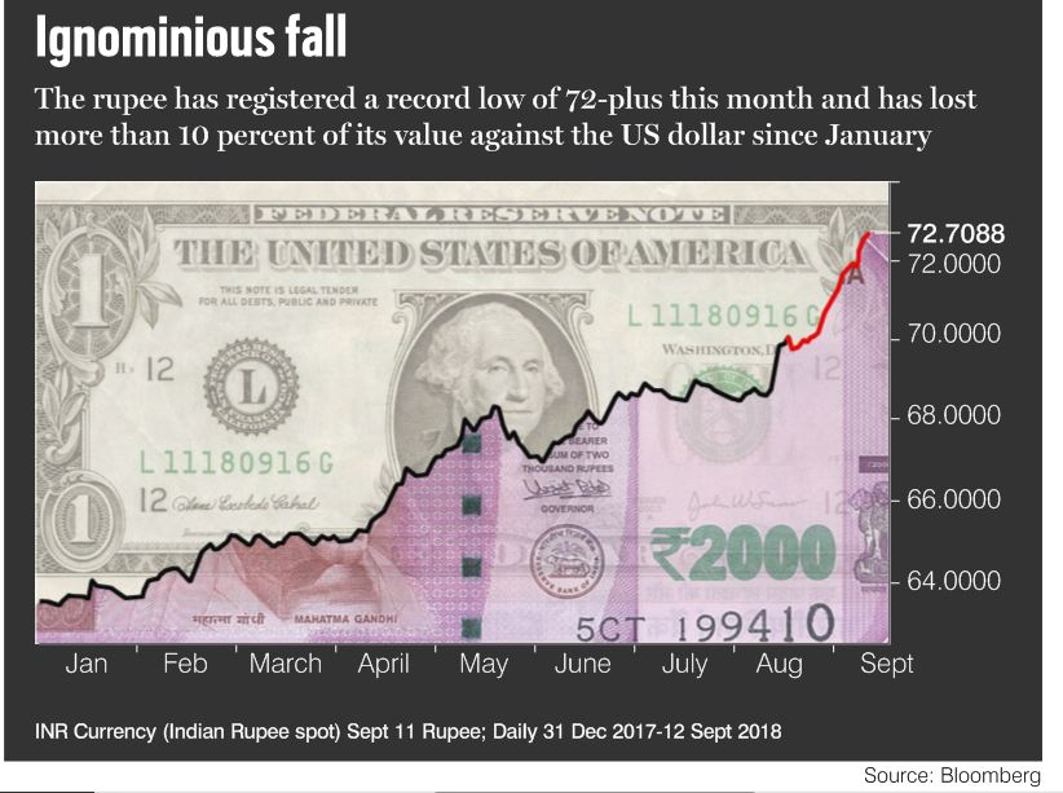 Exchange rates have an opposite effect on the two types of transactions—a weak currency, while helpful for trade transactions, is detrimental for financial transactions. So whether a currency depreciation is expansionary or contractionary depends on which channel—trade or financial—predominates in a country.

India is not a major exporting country. Only about 13 percent of its GDP comes from exports. This is less than half the global average of 30 percent. Since 2014, exports have dropped both in absolute terms and as a percentage of GDP despite a weakening rupee.

On the import side, a weakening rupee combined with the “Make in India” push should have reduced imports through the demand-substitution effect, but that too hasn’t happened. Imports have increased by almost 20 percent over the last four years.

This suggests a weak linkage between exchange rates and trade transactions in India. This phenomenon has also been documented in other countries, most recently in Japan where Japanese exports have been weak despite a 30 percent depreciation of the yen since 2012.

Economists argue that with global supply chains, production has gotten fragmented across countries. Smartphones assembled and exported from China use parts imported from multiple countries so depreciation in the exchange rate might be helpful to the exports of phones, but hurts the imports of components.

India faces a similar scenario. Its largest export is value-added petroleum products that come from crude oil which is also its largest import. A depreciating rupee might help one but hurts the other.

On the financial transactions side, India’s external debt has been climbing steadily to reach $530 billion or about 21 percent of GDP by March 2018. This growth in external debt reflects both higher commercial borrowing and higher deposits by non-resident Indians.

The total value of commercial borrowings in May 2018 was 30 percent higher than a year ago as higher domestic rates and tightening liquidity from the banking crisis has forced Indian companies to increase their overseas borrowings.

This will be devastating for the balance sheets of Indian borrowers—both sovereign as well as corporate.

As the financial transactions side of the economy is more dominant, and growing more rapidly than the trade side, a falling rupee will present strong headwinds to the economy. It is imperative, therefore, that the RBI focus its attention on strengthening the rupee.

Analysts give a lot of reasons for the depreciating rupee—higher oil prices, worsening current account deficit, Turkish crisis, etc. But all exogenous events are transient and do not explain the systematic decrease in the rupee over the last three decades.

The single biggest reason for the rupee being undervalued is that it is not a fully convertible currency. It is convertible only for current account transactions but not for capital transactions. As a result, foreign investors cannot freely invest in India’s capital assets (stocks, bonds, real estate, start-ups, etc) and Indian companies cannot freely acquire foreign assets. These restrictions on the free flow of capital add a substantial risk premium to the exchange rate.

It is time for the RBI to set the rupee free and make it a fully convertible currency. This will eliminate the risk premium and make it a stronger currency. It will result in lower inflation, interest rates, costs for importing oil and high-technology capital equipment. It will increase realised returns on foreign investments in India, thereby making it a more attractive destination for foreign capital.

Singapore’s charismatic leader, Lee Kuan Yew, built that country into a financial powerhouse by being single-minded about keeping the Singapore dollar strong because he believed that it kept inflation low and allowed the government to build the infrastructure and institutions it needed to grow. India should do the same.