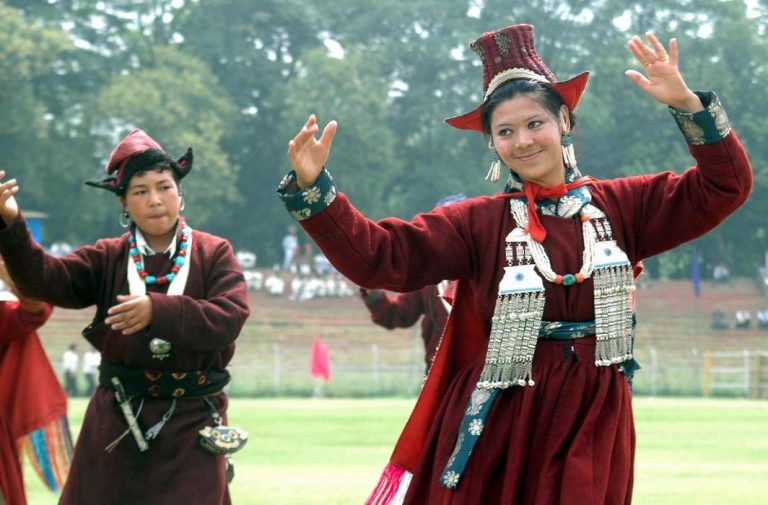 Above: Tribal communities constitute over 97 percent of the Ladakh population/Photo: UNI

While there is unrest in some quarters about the status of the region, there is evidence that a census has been done for each tribe, indicating that it could be declared a tribal area

Will the non-inclusion of Ladakh in the Sixth Schedule of the Constitution trigger violence and separatism in this strategic trans-Himalayan territory? This Schedule provides for autonomous tribal areas and gives them the power to make laws on matters of local importance. Are the fears in this regard justified? No. The region has a commendable history of bravery and patriotism. Uniformed forces have been unanimous in their praise of the role of the local population in all wars—from the first in 1947 to the last in Kargil in 1999. Why then are such apprehensions being regularly expressed by Sonam Wangchuk, the innovator who inspired Aamir Khan’s character, Phunsukh Wangdu (Rancho), in 3 Idiots? He told India Legal: “If driven into a corner, the people may lose gratitude and patriotism.” When told that his observations were strong, he remarked: “It is the message and when the message is not good, you don’t kill the messenger.”

One would have ignored 53-year-old Wangchuk, but for his well-earned reputation of being a man of ideas. His contribution to the education system in Ladakh is widely acknowledged. He was honoured with the Magsaysay Award in 2018. Of late, he has been raising the spectre of a grim scenario in Ladakh which is inconsistent with the celebrations in Leh after the region’s elevation to a Union Territory. Ladakh, consisting of Leh and Kargil districts, is actually the only part of the erstwhile Jammu and Kashmir which has been jubilant after its bifurcation into the two UTs of Ladakh and J&K.

Wangchuk’s argument is that people may “pick up arms” and there may be “Tibetisation of Ladakh” if it is not included in the Sixth Schedule. The formation of the UT, according to him, has exposed the region to the risk of outside interference, threatening its culture, ecology and environment. Media-savvy Wangchuk has circulated a series of videos with the title “Mann ki baat (message from heart) of Ladakh” borrowed from Prime Minister Narendra Modi’s monthly broadcast. In the videos, he has said that the people of the region think that “what is happening here is what China did in Tibet”.

He added that “unfortunately there are murmurs whether the status of a Union Territory was granted for others to exploit the vast resources of Ladakh”. He hoped that the issue gets resolved before the people’s love wanes and before alienation grows and turns into a separatist movement. He said that three months had passed, and there was no announcement and people feared that their land and environment were threatened. He said if there was indiscriminate development or a ten-fold increase in population, the land wouldn’t be able to sustain it. “We are not asking for any special law, we are asking for the implementation of the one that is already in the Constitution,” he said. There is no evidence to suggest that he has evoked widespread response.

His comment on “three months” having passed refers to the recommendation made by the National Commission for Scheduled Tribes (NCST) at a meeting in Delhi on September 11 that the UT of Ladakh should be brought under the Sixth Schedule as it would help in (i) democratic devolution of powers; (ii) preserve and promote distinct culture of the region; (iii) protect agrarian rights, including rights on land; (iv) enhance transfer of funds for the development of the region. According to an official release, Dr Nand Kumar Sai, chairperson of the Commission, had communicated the recommendation to the home minister and the tribal affairs minister and consulted both the ministries as well as the law and justice ministry before reaching the conclusion.

The NCST was guided by the consideration that Ladakh was “predominantly a tribal region” and its total tribal population was over 97 percent, taking into account “a number of communities including Sunni Muslims in the region, who are claiming Scheduled Tribe status”. The official release noted that “prior to the creation of the Union Territory, people in Ladakh region had certain agrarian rights, including right on land, which restricted people from other parts of the country to acquire land in Ladakh. Similarly, the region has several distinct cultural heritages by communities such as Drokpa, Balti and Changpa, among others, which needs to be preserved and promoted”.

Drokpas are considered the last descendants of the Aryan race; Baltis are an ethnic group of Shia Muslims, mainly inhabiting Kargil district, and Changpa is a semi-nomadic tribe in the high-altitude Changthang region of Leh district. Likewise, the other tribes are either Buddhist or Shia Muslims. Communities like the Sunni Muslims, who constitute a minuscule minority, don’t figure in the official list and they include “arguns”, the hybrids between Ladakhis and non-Ladakhis.

From the figures given by the Commission—66.8 percent tribal population in Leh, 73.35 percent in Nubra, 97.05 percent in Khalsti, 83.49 per cent in Kargil, 89.96 percent in Sanku and 99.16 per cent in Zanskar—it is evident that the census has already been done for each tribe. This indicates that preparations for declaring the region a tribal area are being made in tune with the popular aspirations expressed from time to time by the Ladakh Buddhist Association, a powerful socio-religious organisation which had agitated for the UT status.

The NCST had met on the issue of Ladakh a month after Parliament passed the Jammu and Kashmir Reorganisation Act in August approving the bifurcation of J&K state. The UTs actually came into existence on October 31. There are teething troubles which the government is still struggling to resolve. It is believed that the government wants to find middle ground between the region’s legitimate aspirations for preserving its identity and culture while ensuring its all-round economic development. This is possible only with the participation of investors from other states who need to be encouraged to develop stakes in its tough environment.

Given this background, a few observers believe that Wangchuk may have jumped the gun. There is speculation that he may be rousing local sentiment to cater to his political ambitions. He had floated an outfit called the New Ladakh Movement some years ago only to see it flop miserably. Wangchuk denies this: “I don’t have any interest. I just hope that professional politicians don’t sit on their hands.”

One leader who disagrees with him is Jamyang Tsering Namgyal, a BJP MP from Ladakh, who shot into prominence after the PM and Home Minister Amit Shah tweeted their appreciation of his speech in Parliament on the abrogation of J&K’s special status and its bifurcation. He has been a votary of Sixth Schedule status and had raised the demand in a letter to Union Tribal Affairs Minister Arjun Munda. According to him, it would guarantee people “a swift ride on the path of development and prosperity as per their aspirations”. He had, among others, backed his case with the following arguments: 98 percent tribal population engaged  in primitive land-based economy, limited means of livelihood, poor connectivity, harsh climate, undeveloped markets for local produce, low employment opportunities, fragile ecology, receding glaciers affecting agriculture, and so on.

He felt that talk of going against the country had tarnished the image of his constituency. He told India Legal: “Even if we don’t get the Sixth Schedule, it does not mean that we will preach separatism and terrorism.” He recalled Ladakh’s adherence to patriotic values. He said that India was not China. “We are a democratic nation and China is a communist regime. Any student of public affairs can understand that this is a significant difference,” he said.

The Congress seems to be watching from the sidelines. Party leader Rigzin Spalbar, a former chairman and chief executive councillor of the powerful Ladakh Autonomous Hill Development Council, has welcomed the formation of the UT and supported the demand for tribal category inclusion. He ruled out separatist tendencies but said there might be “alienation if there is invasion on local ethos”. Clarity will emerge once the government disposes of the NCST’s recommendation. The sooner it is done, the better it will be for the region.