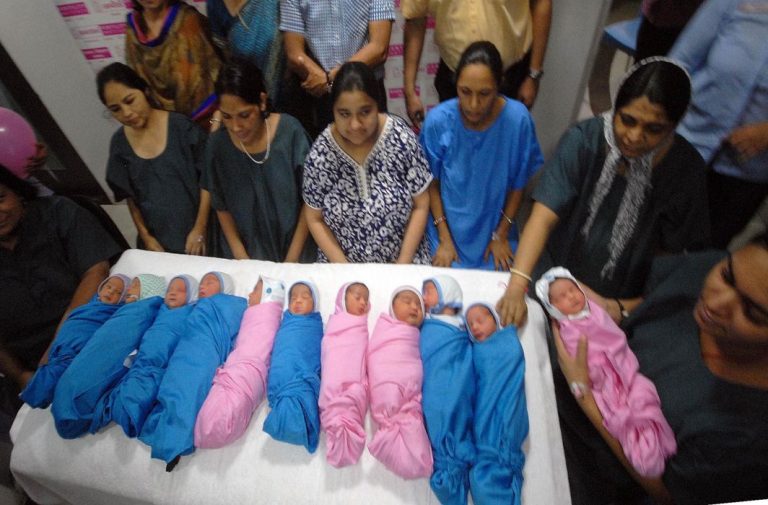 Above: File photo of newborns at a surrogacy clinic/Photo: UNI

The Union Cabinet chaired by Prime Minister Narendra Modi recently gave its approval for moving official amendments to the Surrogacy (Regulation) Bill, 2016. The Bill, which imposes a blanket ban on commercial surrogacy in India through stringent provisions for imprisonment and hefty fines, and makes only “infertile couples”—who have been married for at least five years —eligible to seek a child through “altruistic surrogacy”, is not only legally unsound but also reflects the patriarchal mindset of our lawmakers.

With its draconian provisions, shallow understanding of Assisted Reproductive Technology (ART) and loud overtones of misplaced morality, the Bill has predictably come under attack from rights activists and medical practitioners. The proposed legislation seeks to curb exploitation of potential surrogate mothers but its provisions will prove counter-productive, they say.

The official statement released by the Modi government after the Cabinet gave its approval for moving amendments to the Surrogacy Bill did not outline what these changes to the proposed legislation would be. Repeated attempts made by India Legal to seek more details from Union Health Minister JP Nadda and his deputy, Anupriya Patel, on the possible amendments that may be made to the Bill proved futile.

The government’s statement said: “The Surrogacy (Regulation) Bill, 2016, proposes to regulate surrogacy in India by establishing a National Surrogacy Board at the central level and State Surrogacy Boards and Appropriate Authorities in the states and Union Territories. The proposed legislation ensures effective regulation of surrogacy, prohibits commercial surrogacy and allows altruistic surrogacy to the needy Indian infertile couples.” The Bill, which will apply to the entire country except Jammu and Kashmir, the statement adds, will “regulate surrogacy services in the country and will control unethical practices in surrogacy, prevent commercialisation of surrogacy and will prohibit potential exploitation of surrogate mothers and children born through surrogacy… All infertile Indian married couples who want to avail ethical surrogacy will be benefitted. Further, the rights of surrogate mothers and children born out of surrogacy will be protected.”

Going by the government’s official statement, not much is expected to change from the original version of the draft Bill that was introduced in the Lok Sabha on November 21, 2016, and referred to the Parliamentary Standing Committee on Health and Family Welfare on January 12, 2017. And, this is where the fear of the medical practitioners and human rights activists lies.

“It is not a practical Bill. A large number of medical practitioners and experts who deal in ART or surrogacy had made their reservations, backed by sound scientific reasoning, clear to the parliamentary standing committee. However, it appears that this government is simply not interested in listening to reason,” Dr Duru Shah, president, Indian Society for Assisted Reproduction (ISAR), told India Legal.

Some of the salient features of the proposed Bill are:

Offences and penalties under the Act:

Commercial surrogacy, publicising commercial surrogacy or aiding buying or selling of human embryo or gametes will be punishable with imprisonment for a minimum term of 10 years and with fine of up to Rs 10 lakh.

Registered medical practitioners, gynaecologists, paediatricians or surrogacy clinic owners who contravene any provision of the Act shall be punishable with imprisonment of up to five years and with fine of up to Rs 10 lakh. In case of subsequent or continuation of the offence, the medical practitioner’s registration can be suspended for a period of five years.

An intending couple who seeks the aid of any surrogacy clinic or registered medical practitioner for commercial surrogacy shall be punishable with imprisonment of five years and with a fine of Rs 5 lakh for the first offence; for subsequent offence the imprisonment may extend to 10 years and fine to Rs 10 lakh.

Every offence under the Act shall be cognisable, non-bailable and non-compoundable.

Among the most contentious provisions of the proposed legislation is the compulsion for a “close relative” of an intending couple to act as a surrogate.

“Firstly, the proposed Bill doesn’t define a close relative. Secondly, making only a close relative of an intending couple eligible to act as a surrogate for their child will have far-reaching and negative ramifications. Consider a scenario where a woman can’t have a child and the only close relative she has is her sister-in-law. Given our patriarchal society, there is a strong possibility that the woman’s family will force the daughter-in-law to act as a surrogate even if she is not willing to do so. How will you stop such exploitation?” points out Dr Shah. 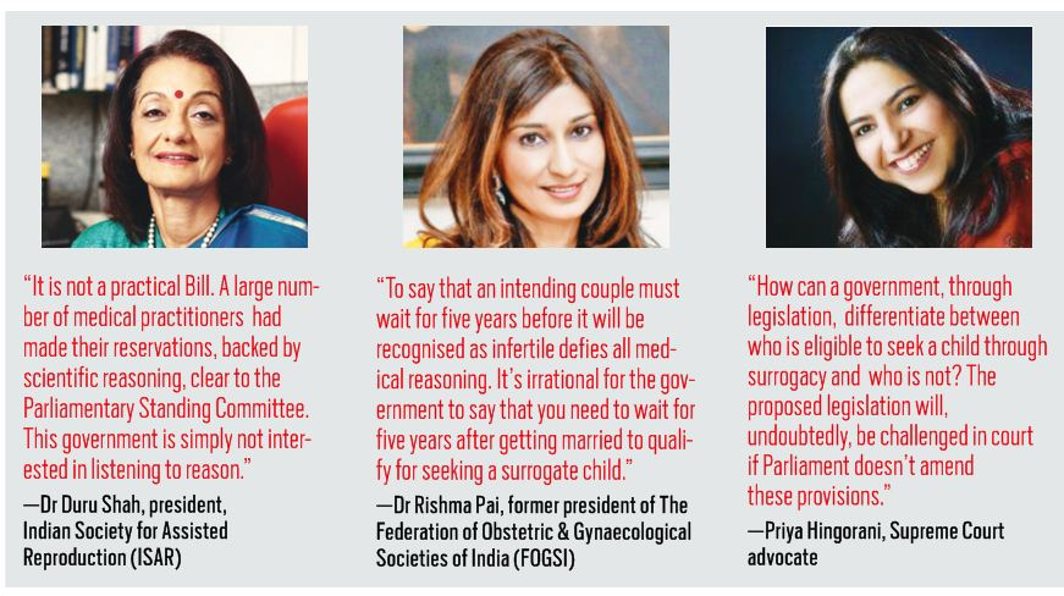 There is another possible scenario where this provision for a “close relative” will be problematic, points out Dr Shah. “Having a close relative act as a surrogate always carries the risk of emotional consequences; what if the child finds out later in life about the circumstances of his/her birth. There is the risk of the child growing distant from his legally recognised mother or his biological mother interfering in his upbringing or any number of other issues that could break a family while surrogacy was meant to complete the family,” she said.

Interestingly, even the Parliamentary Standing Committee’s recommendation on the Bill, tabled in Parliament in August last year, says: “Given the patriarchal familial structure and power equations within families, not every member of a family has the ability to resist a demand that she be a surrogate for another family member. A close relative of the intending couple may be forced to become a surrogate which might become even more exploitative than commercial surrogacy. The Committee, therefore, firmly believes that altruistic surrogacy only by close relatives will always be because of compulsion and coercion and not because of altruism.”

The government, however, doesn’t appear inclined to accept this view. The Bill’s lack of recognition of rights of a single parent or member of the Lesbian, Gay, Bisexual and Transgender (LGBT) community to seek a child through surrogacy and the clause that a couple must be married for at least five years before either or both of them can have themselves certified as “infertile” in order to seek a child through surrogacy are equally problematic and legally unsound.

“To say that an intending couple must wait for five years before it will be recognised as infertile under the proposed Bill defies all medical reasoning. There are thousands of women who are born without a uterus. In such cases, a woman and her doctors know—even before she attains marriageable age—that she will not be able to conceive. “It’s irrational and cruel for the government to say that you need to wait for five years after getting married to qualify for seeking a surrogate child,” Dr Rishma Pai, former president of The Federation of Obstetric & Gynaecological Societies of India (FOGSI), told India Legal.

Dr Pai says that in her submissions before the Parliamentary Standing Committee she had tried to explain to the lawmakers that “medical science is not all black and white, and the proposed law should recognise that medical innovations along with sound legislation can minimise health concerns for surrogate mothers while ensuring that they aren’t exploited”.

The Bill’s refusal to identify single parents and members of the LGBT community as those eligible to seek a child through surrogacy is a clear violation of Article 14 (equality before law) of the Constitution. Rights activists say the Bill violates individuals’ right to equality, liberty and freedom.

“How can a government, through legislation, differentiate between who is eligible to seek a child through surrogacy and who is not? It is bad enough that the government doesn’t recognise same sex marriages, despite a landmark verdict by the Delhi High Court that decriminalised homosexuality. Now, it wants to take away the rights of those from the LGBT community or even an unmarried or widowed heterosexual from becoming a parent with the aid of a surrogate mother. The proposed legislation will, undoubtedly, be challenged in court if Parliament doesn’t amend these provisions,” says Supreme Court advocate Priya Hingorani.

Over the past few years, several Indian film celebrities have declared that they were blessed with a child thanks to surrogacy. The list of these “celeb parents” include the likes of Shah Rukh Khan, who opted to have a child through surrogacy, despite being a father to two biological children, Aamir Khan and his wife, Kiran Rao, Tusshar Kapoor and Karan Johar (both single parents). Had the proposed surrogacy bill been enacted a decade ago, none of these famous personalities would have qualified to have a child through a surrogate.

The Bill seeks to prohibit commercial surrogacy, made legal in India in 2002 after the Indian Council for Medical Research (ICMR) issued guidelines in its favour, and make it a cognisable offence punishable with a 10-year jail term along with a fine of Rs 10 lakh. The rationale behind this stern provision seems to be that commercial surrogacy is exploitative.

A host of medical practitioners, however, disagree with this contention. The ICMR guidelines were issued during the tenure of the Atal Bihari Vajpayee-led NDA government. Later, in the absence of legislative backing for the practice, the Supreme Court through its 2008 verdict in the Baby Manji Vs. Union of India case upheld the legal validity of commercial surrogacy. In the following years, foreign nationals and wealthy Indians made a beeline for Indian surrogacy clinics, making surrogacy an over $2 billion industry annually (source: Parliamentary Standing Committee report).

Medical practitioners involved with surrogacy procedures told India Legal, on condition of anonymity, that there have been incidents where quacks have duped doctors, couples and surrogates after facilitating a “surrogacy deal”. However, are these incidents reason enough to ban commercial surrogacy?

“If the government bans it, we will be legally bound to accept it. We had urged the Parliamentary Standing Committee to make a legal framework that allows compensated surrogacy, not commercial surrogacy, wherein a woman who voluntarily agrees to act as a surrogate can be compensated for her physical well-being, the travail of carrying the child for nine months and other issues that may arise during the pregnancy. A blanket ban on commercial surrogacy will not affect doctors much, but will be a huge setback for intending couples as well as women, who of their own will, wish to help someone enjoy the blessing of parenthood,” said Dr Pai.

Is the Modi government listening?