Amid speculation over general elections being advanced, the last budget seems like a poll manifesto aimed at the electorate

It has been a sorry tradition for governments to present their final general budget with an eye firmly on the electorate, throwing fiscal prudence to the winds while going full steam on populist announcements. For a finance minister who has been battling charges of steadily wrecking the Indian economy over the past four years, Arun Jaitley seems to have defied this traditional wisdom with his budget. This is not for a dearth of populist ann­oun­cements but for promises that would possibly do more harm than good to the BJP’s poll prospects.

The Congress, along with other Opposition parties, has over the past several months raised the red flag over the inability of the Narendra Modi-Arun Jaitley combine to stem growing unemployment, rein in spiraling oil prices and inflation, boost economic and human development indices and steer a stagnating economy out of gloom. It was expected that the budget presented on February 1 would provide a roadmap for addressing these concerns. However, Jaitley seems to have failed miserably in balancing the aspirations of the electorate against the ambition of reviving the economy. Instead, he seems perilously close to stumbling.

The budget—that came a month after the BJP’s “humiliating” victory in Gujarat and ahead of polls scheduled in eight states—predictably was aimed at pleasing the rural and semi-urban electorate. Yet, the fineprint of the government’s annual financial statement gave little cheer to farmers, the middle class, investors and corporates. What is likely to hit the BJP, more particularly Prime Minister Modi, is the chance of the electorate seeing through the mirage of pro­mises projected by Jaitley, especially in the agriculture and healthcare sectors. 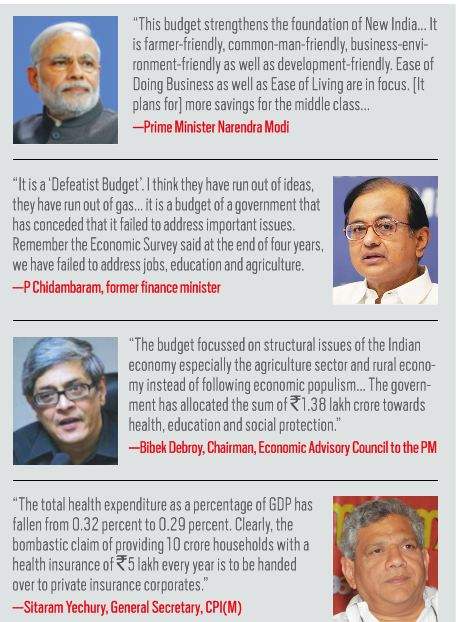 Jaitley’s promise of ensuring that the income of farmers would double and that the government would dole out Minimum Support Price (MSP) at one and a half times the production cost for rabi crops should have gone down well. However, this claim could further irk the intended beneficiaries at a time when farmer protests are continuing across the country. Congress president Rahul Gandhi, other Opposition parties and now BJP rebel Yashwant Sinha have been using these protests for political gains against the BJP. Farmers have for long been victims of pilferages in MSP entitlements and also know that the support price rarely covers their production cost. In such a scenario, particularly when their demands for loan waivers haven’t been met by Jaitley, the promise of increasing the MSP—only for rabi crops—could backfire.

The biggest announcement in the budget was proposing the world’s largest government-funded health protection plan, which aims to benefit 10 crore poor families with medical aid worth Rs 5 lakh each a year. It is the finance minister’s biggest gamble, one that is unlikely to pay off. With a mere 2.2 per cent of total budgetary spending being earmar­ked for healthcare and practically no re­forms announced for revamping the country’s medical infrastructure, this plan could turn into a “chunavi jumla” like the BJP’s 2014 promise of bringing back black money stashed by Indians in overseas tax havens and distributing  Rs 15 lakh to every citizen of the country.

By not meeting the long-due aspiration of the salaried class on restructuring income tax slabs while making tax concessions for corporates and big industries, Jaitley has given Rahul Gandhi just the ammo he needs to revive his “suit­boot ki sarkar” jibe at the Modi regime. Jaitley’s decision to extol the much-criticised demonetisation and GST regime when their adverse impact had been outlined just a few days back by the government’s own Economic Survey has only reinforced the impression that the government doesn’t care about its subjects anymore. Jaitley’s failure in providing a roadmap for job creation at a time when Rahul Gandhi has already made rising unemployment a poll plank will also hurt the BJP’s electoral prospects in the months ahead.

Jaitley’s ignorance of the demands of states, including those ruled by key allies like Andhra chief minister Chandrababu Naidu’s TDP, is already creating trouble for the NDA government. Naidu has threatened to quit the ruling alliance over Jaitley’s alleged “betrayal” of his state and there is every possibility that similar attacks will come from BJP’s already dissenting ally, the Shiv Sena, in days to come.

In the coming months, several states will go to the polls. There is a buzz that Modi might roll out his ambitious plan of holding simultaneous Lok Sabha and assembly polls when MP, Chhattisgarh, Rajasthan and Mizoram go to the polls in November. With Jaitley’s budget pro­ving to be a damp squib, high on poll rhetoric and low on deliverables, it will expectedly be left to Modi’s spin-doctoring talent to project Union Budget 2018 as his “roadmap for New India” which promises an “Ease of Living along with Ease of Doing Business”. For the Opp­osition parties, the challenge now is to convince the electorate otherwise. The budget, in that sense, is also the sounding of the poll bugle.