A petition on increasing communal vigilantism led the Supreme Court to issue notices to six states. Can the government afford to turn a blind eye to them?

The cow, a revered animal for Hindus, has become a political and legal flashpoint. Increasing cow vigilantism in some BJP-ruled states has led to the lynching of Muslims and Dalits on allegations that they were taking the cows out of the state for slaughter. Except for half-a-dozen states, mostly in the North-east, all others have laws banning cow slaughter. While these vigilante groups are not a recent phenomenon, it is the brazenness with which they are unleashing violence that is alarming.

However, a petition in the Supreme Court seeking a ban on cow vigilante groups, led a bench to issue notices on April 7 to Rajasthan, Maharashtra, Gujarat, Jharkhand, Karnataka and Uttar Pradesh, five of which are ruled by the BJP. A bench comprising Justices Dipak Misra and AM Khanwilkar sought the response of the states on why self-styled “gau rakshak dals” should not be banned for allegedly creating disharmony among communities. This was just days after a dairy farmer, Pehlu Khan, brutally beaten up by cow vigilantes in Rajasthan’s Alwar district, died of his injuries.

The National Human Rights Commission was also not lagging behind as it sought a report on the Alwar mob incident from the state and issued a notice to the centre on April 8. Calling for a detailed report, the Commission termed the incident as “painful” and a “serious violation” of human rights. It said that “self-proclaimed” volunteers were creating an atmosphere of fear in the society.

There was heated discussion in both Houses of parliament, with the opposition alleging that cow vigilantism was on the rise after Prime Minister Modi took over. Even NDA allies questioned the BJP leadership in their internal meeting recently on beef ban. Scheduled Caste Commission chairman PL Punia had demanded a ban on gau rakshaks last year as it mostly affected Dalits who depend on cow leather for their livelihood.

Can these vigilante groups be allowed to run amuck? Has the BJP victory in 2014 and its recent win in UP led to the rise of this vandalism? Can one group impose dietary restrictions on another religious community? Can the state remain passive when one group kills the other due to active vigilantism? And what about the constitution’s guarantee regarding religious freedom? The Supreme Court may come up with answers to these questions.

Congressman Tehseen S Poonawalla, in his PIL to the apex court, has alleged that these cow vigilante groups were committing atrocities against Dalits and minorities in the name of cow protection. He has argued that they needed to be “regulated and banned in the interest of social harmony, public morality and law and order in the country”.

The immediate provocation for this was the death of Pehlu Khan, a 55-year-old dairy farmer from Haryana, who bought a cow for Rs 45,000 at a cattle fair in Alwar. He was driving in a convoy of six trucks and returning to his home state of Haryana when the vigilante mob intercepted them and beat up Khan and four others alleging that they were smuggling cows. Khan succumbed to his injuries and died.

While this incident found an echo in parliament, the Supreme Court and the National Human Rights Commission, neither the prime minister nor the chief minister of Rajasthan, Vasundhara Raje, cracked the whip or condemned the incident. Rajasthan is the only state with a ministry for cow welfare. The state has also imposed a ten per cent cow cess on stamp duty on all non-judicial instruments this month to conserve and protect cows and their progeny.

So who are the cow vigilantes and why are they running amuck? They are self-styled cow protectors who take the law into their own hands. The present day gau rakshaks (cow protectors) go back to the late 19th century when Swami Dayanand Saraswathi launched a Hindu revival movement in UP, Punjab and other parts of North India. He also called for saving the cow from slaughter. The Gaurakshini Sabha (Cow Protection Committee) in 1882 was a potent force of the Hindu revivalist movements. Lokamanya Tilak took it up in the Deccan region by creating Cow Protection Societies.

Although cow protection is an old issue, the BJP has used it for consolidation of Hindu voters. After Modi’s massive victory in the 2014 polls, majoritarianism seems to be riding on the back of the cow. The lynching of Pehlu Khan is the 10th such incident in two years. The main reason for this boldness could be that Hindu right-wing groups might be feeling that their time has come to rule and implement their Hindutva policies. Also, the Sangh Parivar may feel that since Modi became PM with their support, it is really they who should be ruling and not him. Another reason could be that Modi himself, being from the RSS stable, is trying to implement their policies. Moreover, the sudden spurt in cow vigilantism has reached a new high after the new Uttar Pradesh chief minister, Yogi Adityanath, ordered the closure of illegal slaughterhouses.

Banning cow slaughter had been a major goal of the RSS since its inception in the 1920s. In Modi, the Parivar found a leader who would make it a part of national policy. For instance, Modi played the cow card as an election issue and had repeatedly taken the Congress to task for promoting a pink revolution (promoting slaughter-houses and the export of meat). He raised it again in 2015 in the Bihar assembly polls. Since 2014, BJP-ruled states have amended laws to criminalise the transport, possession and consumption of beef.

Although cow protection is an old issue, the BJP has used it for the consolidation of Hindu voters. Majoritarianism seems to be riding on the back of the cow

There have been many incidents of attacks by vigilante groups. In 2015, a mob lynched a 50-year-old farm worker, Mohammad Akhlaq, in Dadri in UP on suspicion of slaughtering a cow and consuming its meat. However, the meat found in his fridge turned out to be mutton.

In Haryana in June last year, a video by cow vigilantes showed two suspected beef transporters being forced to eat cow dung. And in July, four Dalit men were beaten up in Gujarat, Modi’s home state, for alleged cow slaughter while they were skinning dead cows brought from another village. Several slaughter houses have also been ransacked and burnt down in UP.

However, voices emanating from various governments don’t give much hope regarding this issue. Union Commerce Minister Nirmala Sitharaman defending Yogi Adityanath’s decision to shut illegal slaughterhouses stated in parliament: “Cow protectionism was the spirit behind India’s freedom movement.” The election manifesto of the BJP in the UP elections had promised to shut down illegal slaughterhouses.

Gujarat Chief Minister Vijay Rupani said his state followed Gandhi’s principles of non-violence and truth and he wanted Gujarat to become wholly vegetarian. His government passed a bill proposing life sentence for those found guilty of cow slaughter. “A single drop of cow blood falling on earth pains Hindus,” the minister in-charge said while piloting the bill in the House last month. However, what Mahatma Gandhi had said was: “I would not kill a human being for the protection of a cow, as I will not kill a cow for saving a human life, be it ever so precious.”

Though the PM spoke on this subject last August, it has obviously gone unheeded. Speaking in Delhi at a town hall meeting, Modi had said: “People who have set up shop in the name of gau rakshaks make me very angry. I have seen people who do anti-social activities at night and don the garb of cow protectors in the morning. The state should prepare dossiers of such cow protectors. 70 to 80 percent will be those who indulge in anti-social activities and try to hide their skins by pretending to be cow protectors.” Two days later, he said: “Shoot me if you must but do not shoot my Dalit brothers.”

Last October, RSS chief Mohan Bhagwat defended cow-protection groups, stating these “law-abiding, good people” shouldn’t be confused with self-styled, motivated vigilantes. But he changed his tune recently, saying: “Nothing should be done while protecting cows that hurt the belief of some people. Nothing should be done that is violent. It only defames the efforts of cow protectors… The work of cow conservation should be carried out while obeying laws and the constitution,” and demanded a national law on cow slaughter. 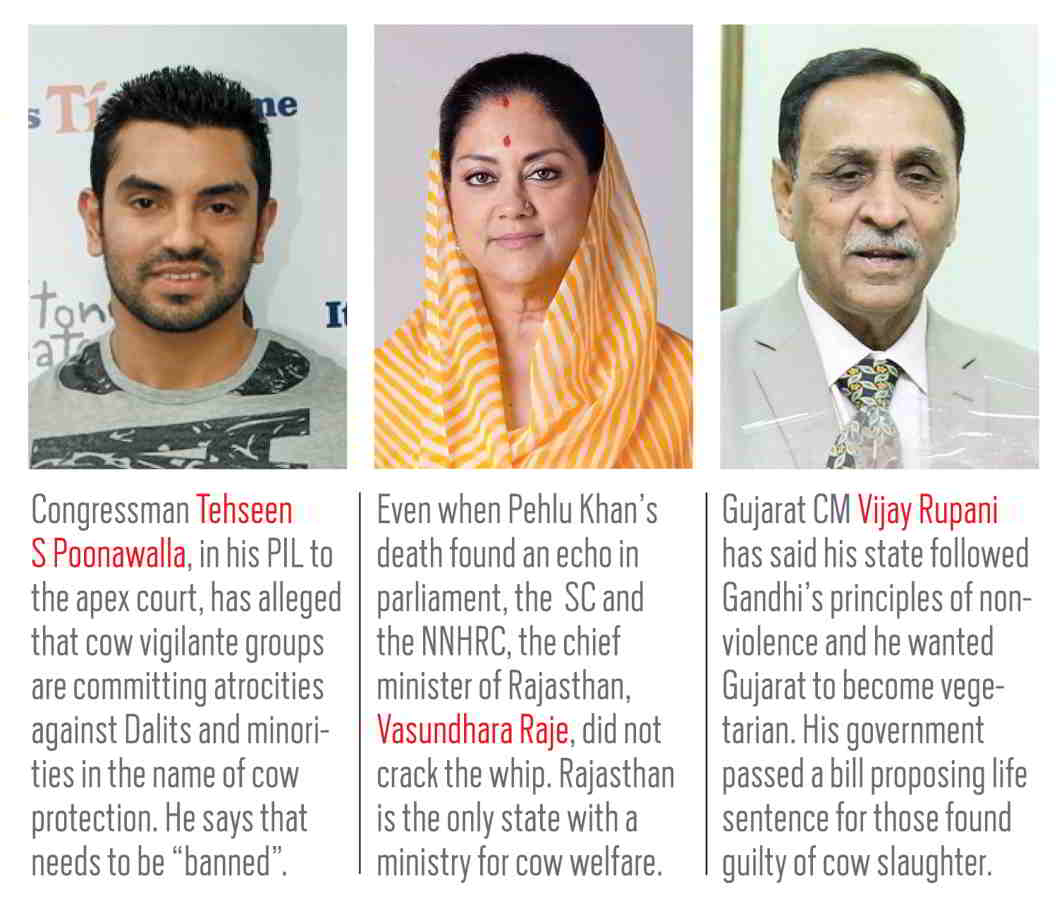 One can only hope that Bhagwat and Modi mean what they say. Vigilantism in any form is a no-no in a democracy. Communal cow politics has damaged the secular fabric of the country and unless the centre and states deal with the culprits with an iron hand, it will get worse.

Moreover, the cow is an economic animal. According to data released by Foreign Agricultural Services/US Department of Agriculture, India, bracketed with Brazil, remained the top global exporter of beef in 2016. In the financial year 2015-16, India earned Rs 26,682 crore from meat export. The beef ban will also have an adverse impact on the leather industry that employs close to 2.5 million people, mostly Dalits. An estimated eight lakh Dalits earn a living through flaying the skin of dead cattle.

The BJP leadership should realise that food habits cannot be changed by cow vigilantism. The cow belt, where this vigilantism is most rampant, is also known for atrocities against Dalits, 63 percent of which occur in just four states: UP, Bihar, Madhya Pradesh and Rajasthan. But beef is part of the diet of Muslims and religious minorities and the cheapest source of protein for many poor people belonging to SCs, STs and some OBCs. Above all, cow vigilantism will be counter-productive to the RSS goals of uniting Hindus. How can Hindus unite by alienating the Dalits?

Like everything else in India, unless laws are implemented rigorously, vigilante groups will run amuck, shredding the social fabric and leading to dangerous and fatal consequences.