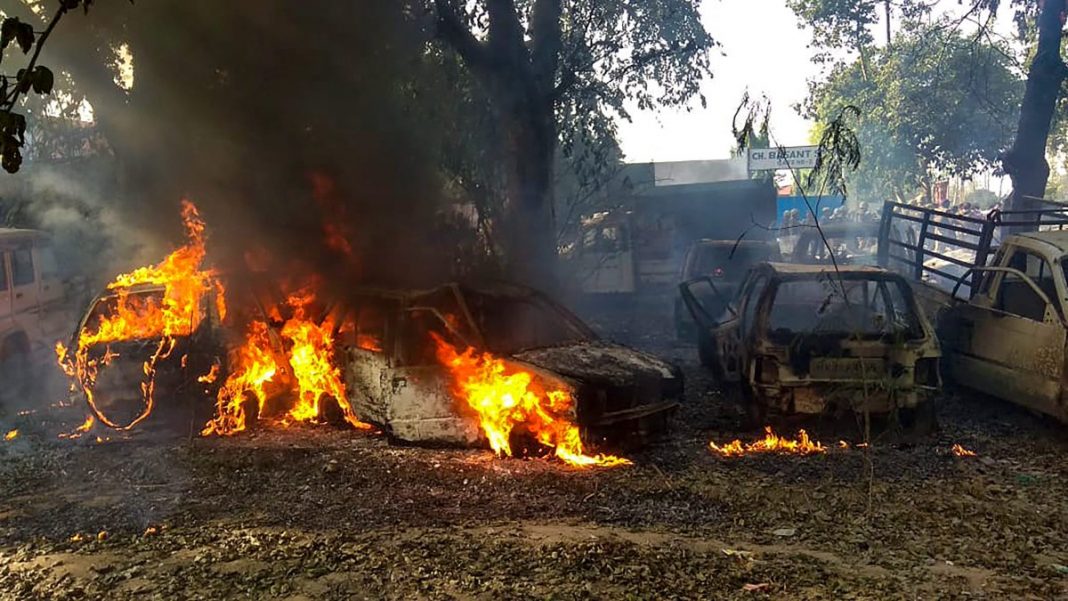 Above: Vehicles on fire at Bulandshahr

Whatever the ulterior motives behind the recent Bulandshahr incident which resulted in the unfortunate death of a police officer and the entire western UP belt becoming communally charged, it has once again raised questions about the state police’s ability to maintain law and order. It also exposes the sheer helplessness of the police before the power-hungry adhocracy enforced by the government’s poor handling of law and order.

This becomes clear if we review past events. A few days ago in an isolated incident in Shamli, a person was snatched from a Dial-100 police car and murdered. This week, Pratyush Kumar, a youth leader participating in a BJP Yuva Morcha, was murdered in broad daylight in Lucknow. The youth had tried reporting a threat to his life three days earlier but the police refused any protection, saying he seemed physically strong enough to defend himself.

With the Yogi Adityanath government’s controversial stand on cow slaughter, non-state actors are taking the law into their own hands in the name of “gau raksha” and feeling free to clash with the police because they feel that the government is on their side. These incidents in isolation are extremely dangerous, but their alarming frequency now seems even more lethal. In Bulandshahr itself, three such incidents, ranging from stone-pelting to a full-on tussle with the police in the name of cow slaughter, have taken place this year.

On September 8, at an institute in Chela, a tussle took place with the police on discovery of a dead cow on the premises. On July 21, stone-pelting broke out in Secunderabad in a similar matter. On May 10, Hindu groups charged against the police when they discovered a dead cow in a truck in Khurja.

The way matters are unfolding, the violent frenzy bears an increasing resemblance to the 2013 communal riots in Muzaffarnagar which resulted in the death of 67 and left thousands homeless. The incident eventually led to polarisation, with the BJP winning 73 of the 80 seats in Uttar Pradesh. With the 2019 elections round the corner, another deep-rooted conspiracy cannot be ruled out.

Both Bulandshahr and Muzaffarnagar are communally charged cities. In both cases, one incident (eveteasing then, cow slaughter now) exploded into a Hindu-Muslim riot. The accused parties in Bulandshahr mostly belong to the Bajrang Dal and have continuously blamed Muslims who were gathered in the village to celebrate Ijitma (a three-day-long religious event).

At a press conference here, a senior police official said that the Muslim gathering drew a crowd of 15 lakh. The figure sounds too big as the village is not large enough to accommodate such a huge number of people. It is being reported that local VHP and Bajrang Dal leaders went to the police station with their complaint of “cow slaughter”. While the police, headed then by SHO Subodh Kumar Singh (later slain), was in the process of registering an FIR, they were stone-pelted by the Bajrang Dal activists. Meanwhile, the carcasses of cows in a tractor-trolley were placed in the middle of the Bulandshahr-Delhi highway.

The SHO was reportedly hit on the head by stones, resulting in severe injuries and blood loss. As the frenzy increased, the police decided to rush the SHO for medical treatment. They managed to get him into their vehicle and drive away. However, barely had they covered any distance that they were again intercepted by the crowd. What followed was extremely tragic—stones were pelted at them, followed by gunshots which led to Kumar being killed. It was only after reinforcements arrived that the mob could be curbed.

Om Prakash Singh, UP’s director general of police, said the force was investigating why cow carcasses were found three days before the anniversary of the Babri Masjid demolition. He also informed that two FIRs—one on cow slaughter and another on the violence—had been filed. Only after the top chain of command realised that the mob had taken the life of one of its own were local leaders booked. Among them was Yogesh Raj, a local Bajrang Dal leader. Seven Muslims were also among the 27 who were booked by the police.

While the opposition has criticised the Yogi Adityanath government for attending a laser show in Gorakhpur when the violence broke out in Bulandshahr, there was considerable anger in the force against the killing of a member of their fraternity.

The government’s response has been extremely lackadaisical with the chief minister busy assuaging the victim’s family with monetary compensation of Rs 50 lakh. However, the CM’s response completely misses out on the preventive measures which need to be taken to avert such incidents in future. Nothing was done either to address the sheer helplessness of the police force which is repeatedly caught in such instances. Unless such measures are taken, incidents like Muzaffarnagar or Bulandshahr are likely to recur, disrupting the state’s harmony and that of the entire nation.

On August 28 last year in Adoli village, Hindu fundamentalists started stone-pelting another community’s place of worship. Even after the incident, the police did not pay any heed or take precautions. This resulted in another such occurence.

Now, Yogi Adityanath claims that the incident was a conspiracy and strict action will be taken. “The incident is part of a bigger conspiracy, and hence all those directly or indirectly related to cow slaughter should be arrested in a time-bound manner,” he said.

The question that arises is that if there was any conspiracy to spoil the atmosphere of UP around December 6, then what were the state police and other security agencies doing?

If the cows were brought there, then why did the police not take concrete action as it was clear that a mob was being incited? This also indicates the state’s inefficiency in implementing the rules of engagement with a violent mob, which has been reiterated by the Supreme Court.

It should be evident to the state that just like cows’, human lives are also important. While the state government has been generous enough to allocate a corpus of Rs 350 crore for gaushalas, neither cows nor human beings are spared the brutality of such events.

In a state where it is becoming increasingly difficult to be near a cow (even a dead one), what hope can the common man have when even the police force is handicapped.