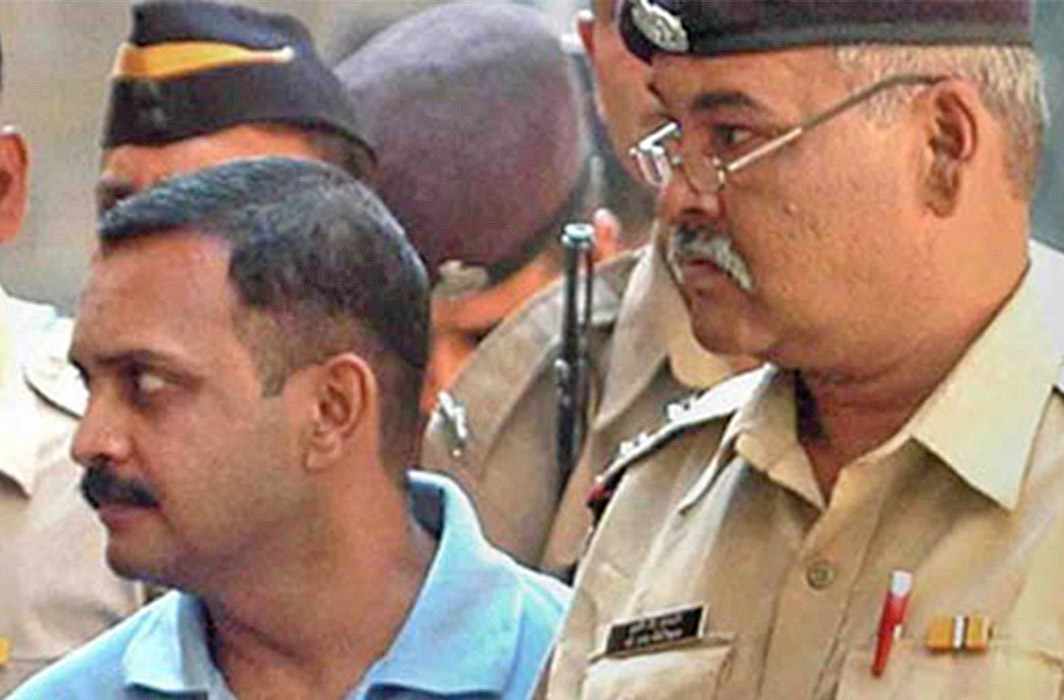 Above: Even in custody, Lt Col Purohit was receiving 75 percent of his salary and allowances. Photo: ddnews.gov.in

The Supreme Court recently granted bail to Lt Col PS Purohit, accused in the case. But it exposes the investigation as either shamefully shabby or motivated.

The news that the Supreme Court had granted bail to Lt Colonel Prasad Shrikant Purohit in the Malegaon bomb blast case was merely another twist in a tale that has already seen so many. In fact, the two-judge bench said that bail was being given because of the contrasting versions put out by Maharashtra’s Anti-Terrorism Squad (ATS) and the National Investigating Agency (NIA), regarding his role in the conspiracy.

Purohit, along with Sadhvi Pragya Singh Thakur, was accused of planting bombs in communally sensitive Malegaon, in which seven people were killed. He has already spent nearly nine years in jail in the case that became a cause célèbre because of multiple factors.

The case became murkier because of the U-turn by investigating agencies under successive governments. The ATS had arrested Purohit on November 5, 2008, when the UPA was in power. At the time, the BJP and the Shiv Sena accused the Congress of using the ATS for political gains. In its chargesheet, filed in 2009, the ATS slapped murder charges against Purohit and invoked provisions of the Maharashtra Control of Organised Crimes Act (MCOCA). The agency described Purohit and his associates as terrorists.

The NIA took over the case in April 2011 and, filed a supplementary chargesheet in 2016, which was after the BJP-led government had come to power, in which all MCOCA charges against all the accused were dropped. It was a turnaround that expectedly generated controversy with the Congress and the Left accusing the agency of going soft on Hindus accused of terror acts.

The NIA, initially had launched a probe into the Samjhauta bombings which killed 68 people, mostly Pakistanis—the train was on its way to Lahore. The timing, in relation to serial blasts that took place around the same time and targeted Muslims, prompted the UPA government to club all blasts cases allegedly involving right-wing extremists, and handed over investigations to the NIA. The agency subsequently approached the Supreme Court seeking Purohit’s custodial interrogation, not just in connection with the 2008 Malegaon blast, but also to investigate his possible role in the Samjhauta, Ajmer and Mecca Masjid attacks. However, the apex court rejected NIA’s plea for custody. He was then under custody of the ATS in connection with the Malegaon blasts.

“Purohit gets bail. It was expected as the present BJP government is protecting all the accused connected with RSS in all bomb blast cases.”

On September 29, 2008, a bomb concealed in a motorcycle went off in Malegaon in Maharashtra, in a Muslim-dominated area, killing at least seven people and injuring 79 others. Following initial investigation, the Maharashtra ATS arrested Pragya, Purohit and a retired army Major, Ramesh Upadhyay. In its chargesheet, the NIA said, “Purohit had proposed theory for a separate constitution for Hindu Rashtra with separate flag, the constitution of Abhinav Bharat, and discussed about the formation of Central Hindu Government against the Indian government and put forth concept of forming this government in exile in Israel and Thailand.” Military Intelligence, when approached by ATS, stated that it was not mandated to infiltrate civilian groups in non-conflict zones, and there was no sanction from the government or any of its agencies to infiltrate Abhinav Bharat or similar rightwing groups.

Purohit had contested this, and said he was planted among Hindutva radicals planning to retaliate against terror attacks by Indian Mujahideen and other terrorist organisations. He claimed he had kept his seniors in military intelligence informed of the progress of his assignment. Senior advocate Harish Salve made use of the glaring factual contradictions in the charge-sheets filed by the ATS and the NIA and informed the Supreme Court that Purohit, as part of military intelligence, had covertly infiltrated into “Abhinav Bharat” and attended their meetings to gather counter intelligence and had kept his seniors informed about it. “If he was part of the conspiracy, why would he inform his superiors?” Salve asked.

The bench also took note of the developments that took place after the BJP-led NDA came to power at the Centre, importantly the 2016 supplementary chargesheet by NIA dropping MCOCA charges against all accused and the retraction of statement of witnesses leading to a clean chit for co-accused Pragya Thakur, a known RSS supporter and activist. It was her motorcycle that was used in the Malegaon blast. Earlier, the NIA had said there were “several incriminating circumstances” against Purohit, which proved his “deep involvement and complicity” in the 2008 Malegaon blast case.

Such radical U-turns, and the announcement of bail, triggered the expected reactions. Congress leader Digvijaya Singh tweeted: “Purohit gets bail. It was expected as the present BJP government is protecting all the accused connected with RSS in all bomb blast cases.” The Congress also targeted the government for two extensions granted to NIA chief Sharad Kumar. Spokesman Manish Tewari said: “It is surprising the government has not been able to find a single officer to head the NIA… repeated extensions have been frowned upon by the Supreme Court.” In fact, in June, 2015, The Indian Express quoted the Special Public Prosecutor in the case, Rohini Salian, as saying the NIA had instructed her to “go soft” on the accused.

“Sonia and Rahul must apologise for indulging in the politicisation of terror and its attempts to defame the Hindu community.”

What seems to have gone in Purohit’s favour is the fact that the army still lists him as a serving officer. For the time he was in custody, he was still getting 75 per cent of his salary and allowances. He is technically “suspended,” but there has been no talk of a court martial or dismissal. The Army had initially conducted a court of inquiry against Purohit, without following it up with the summary of evidence (framing of charges) and court martial (the trial). After his release, Purohit thanked the army for having backed him. “It has been the tradition and ethos of the Army not to let down its men,” he said. He was even given an army escort from jail to the Colaba Military Station where he will be posted, although military authorities said this was because there was a threat to his life.

The army itself has clouded the issue of Purohit’s involvement with contrasting stands. Initially, it said that Military Intelligence did not have a brief to infiltrate civilian groups in non-conflict zones. His wife Aparna has always contradicted this and pushed for the NIA to be given the Court of Inquiry (COI) report from army headquarters which examined Purohit’s role. Then Defence Minister Manohar Parikkar asked the army to comply and the COI report was handed over. It seemed to confirm that Purohit had kept his seniors in the loop regarding his activities and, more importantly, stated that military intelligence officers can infiltrate civilian groups if they perceive a threat to national security.

Whatever the final verdict, the case has already developed into a spy thriller and a mystery which extends to the highest reaches of the government. Was Purohit really an undercover operative tasked with infiltrating groups like SIMI, Indian Mujahideen, Naxalites and Hindu militant groups by Military Intelligence? Or, as Maharashtra’s ATS seems to believe, a conspirator in acts of terror.

Sadly, the contrasting findings of two investigating agencies, and the political colour the case has acquired, means that the truth will remain buried, along with those who died in Malegaon.