The plea in the Supreme Court of TP Senkumar for his reinstatement as Kerala’s Director General of Police is a case that is being watched closely in political circles. The petitioner was the first top bureaucrat to be removed after the CPM-led Left government under Pinarayi Vijayan assumed power on May 25, 2016. Two days later, DGP Senkumar was shunted out from the top job.

He approached the Central Administrative Tribunal (CAT) which upheld the government order. The Kerala High Court also rejected his plea for reinstatement. Senkumar then decided to move the apex court, which after hearing arguments from both sides, has now reserved its judgment for a later date.

One can’t predict the ruling of the Supreme Court although Senkumar and his lawyers have drawn comfort from the fact that the two-judge bench of Justices Madan B Lokur and Deepak Gupta took a sharp dig at the Kerala government by posing this question: “We have heard that a woman has been on a hunger strike against police’s high handedness in your state. Will you then change your present DGP?’’

The state government has based Senkumar’s ouster on two incidents that rocked Kerala in 2016. One was the rape and murder of Jisha, a 29-year old law student in Perumbavoor on April 28, 2016 and the other was the April 10, 2016 Puttingal temple fireworks tragedy which claimed 130 lives. The state government’s affidavit notes that the two incidents showed the office of the DGP in a poor light. To quote: “The manner in which the petitioner (Senkumar) dealt with the temple fire and the Perumbavoor murder created widespread serious dissatisfaction among the general public about the efficiency of the state police.”

The state government has put forward the argument that Senkumar’s shunting out was as per the Kerala Police Act Section 97(2)(e) which says that an officer may be removed if he “causes serious dissatisfaction in the general public about efficiency of police in his jurisdiction”. The government’s stand against Senkumar was bolstered by a report sent by the then state home secretary, Nalini Netto, in which the responsibility of the failures to act effectively in both the Perumbavoor and Puttingal incidents was put on Senkumar. This report was the basis of Kumar’s removal from the post of DGP (law & order).

But on January 19, 2017 a case was filed in a Thiruvananthapuram court against Netto by a private petitioner. It was alleged that Netto had filed “a fabricated report” against Kumar which led to his removal and, more importantly, the report was “firmed up” by adding the investigating lapses in the Perumbavoor and Puttingal cases only after the DGP’s removal on May 27. That Netto failed to pass the file through the then chief secretary was another point raised by the petitioner to show that there was a conspiracy to remove Senkumar.

Though the court failed to find merit in the case after a quick verification by the Vigilance & Anti-Corruption Bureau (VACB), there are allegations in police circles that Netto had filed the report at the behest of Chief Minister Pinarayi Vijayan to whom she was directly reporting as principal secretary.

The opposition in Kerala raised the issue in the assembly following which the chief minister had to make a statement saying: “Senkumar’s present behaviour (going to the court) shows that the government was right in removing him.” More pertinently, the CM added: “The action was not over his inefficiency in dealing with the Perumbavoor case.” Vijayan’s remark in the assembly now finds mention in Senkumar’s plea before the SC.

In his plea before the apex court, Senkumar claims he was acted against because he followed up on cases which irked the ruling political establishment. “My removal can only be attributed to my thorough and independent investigation into a number of political killings in the state in which leaders of the CPM stand as accused,” he told the Supreme Court adding, “the Chief Minister has on the floor of the house cast aspirations calling me a member of the opposite political party. This statement only substantiates my claim that I was being targeted as a political opponent for the independent work that I was doing.” 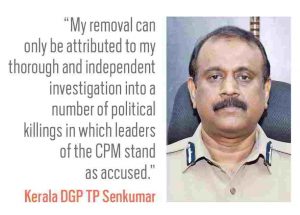 Senior lawyer A Jayashankar says that the DGP does have a point here. “There is no doubt that Senkumar’s strong stand in many cases like the Kathiroor Manoj and Shukhoor murder cases where the CPM’s local leaders are in the dock has irked the party. How do you otherwise explain the Chief Minister inking a transfer order within two days of assuming power? It’s pure political vendetta at play,” Jayashankar told India Legal.

Senkumar has also questioned the manner in which he was ousted. While the government claims that it was a cabinet decision, the DGP claims the government has not submitted any minutes of the cabinet meeting. “Usually courts shy away from interfering in such matters of the executive. The Kerala High Court perhaps did not want to have a tiff with the state government over this issue. But the fact that the Supreme Court has heard this petition in such detail despite the HC rejecting it is pertinent,” adds Jaishanker.

Meanwhile, the last 11 months after Senkumar vacated the DGP’s chair, the law and order situation in Kerala has only deteriorated. Political violence has seen more than half-a-dozen murders in the state with both the CPI(M) and the BJP along with the RSS actively involved. Kannur in north Kerala has once again become a flashpoint with the violence spreading to other districts as well.

The Supreme Court verdict will bring a closure to the Senkumar controversy. But the case has already raised questions on whether political motives were involved in his ouster.

Also, can a DGP be targeted on the basis of two incidents that took place under his overall watch? Going by that yardstick, should his successor also be acted against for the deteriorating law and order situation in the state?