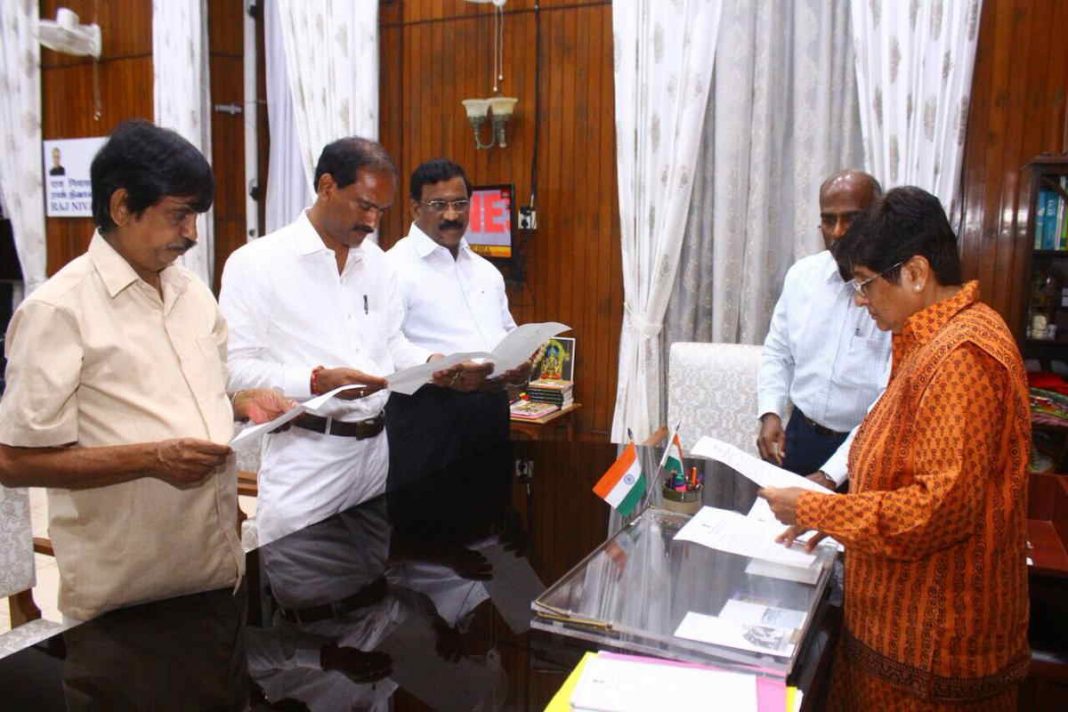 Above: L-G of Puducherry, Kiran Bedi administering the oath to three MLAs nominated by the BJP, upsetting the chief minister and the Speaker. Photo: twitter.com

In a blatant disregard for the elected government of Puducherry, Lt-Gov Kiran Bedi has administered the oath of office to three persons nominated by the centre, sharpening the divide with the CM

The Union Territory of Puducherry, 140 km from Chennai, is politically on the boil for the past three months. Puducherry is ruled by a Congress-DMK coalition headed by Chief Minister V Narayanasami. But ever since his government took office in May 2016, there has been constant friction with the Lt-governor, Kiran Bedi. And matters finally reached a flashpoint last fortnight.

On July 4, the Modi government nominated Puducherry BJP president V Saminathan, treasurer KG Shankar and BJP sympathiser S Selvaganapathy as members of the assembly. This was done on the advice of Bedi. Immediately after the announcement was made by the centre, all three called on Bedi, Chief Secretary Manoj Parida and Speaker V Vaithialingam. They requested the Speaker to hold the swearing-in-ceremony.

But the Speaker did not show any interest in this matter. Then all three met Bedi. And according to a senior journalist working in an English national daily in Puducherry: “Kiran Bedi administered to them the oath of office and secrecy at Raj Nivas without informing the elected government or inviting the chief minister, his cabinet colleagues and the opposition. This angered both the government and the Speaker.”

The Supreme Court has agreed to look into the Delhi government’s contention that the Lieutenant Governor (L-G) cannot be the supreme head of the administration in Delhi and the elected government has some substantial powers too.

This is challenging the High Court order which said that the L-G is the administrative head of the National Capital Territory.

Senior advocate Gopal Subramanium, appearing for the Delhi government of the Aam Aadmi Party, mentioned the case in front of the Supreme Court bench of Chief Justice JS Khehar and Justice DY Chandrachud. The bench said: “We will post it and consider setting up of the bench.”

Subramanium reminded the bench that a two-judge bench had earlier referred the appeals to a constitution bench. That bench, reminded Subramanium, had commented: “…this is a very difficult and complicated problem. However we will do it”.

The Speaker made his displeasure evident. “The next day, the assembly secretariat returned Kiran Bedi’s communication to Raj Nivas, because both the government and the Speaker strongly felt that they were not consulted in the process. Both felt humiliated,” said the journalist.

But Kiran Bedi was adamant and said: “The centre had exercised its statutory power (as laid down under section 3 (3) of the Union Territories Act) and nominated the three to the assembly. The order was duly notified by the chief secretary and it was also published in the extraordinary gazette of Puducherry and the assembly Speaker was also informed”. Bedi also justified her decision to administer the oath of office to the MLAs after the Speaker was evasive in fixing the date of their swearing-in.

Meanwhile, Lakshminarayanan, a Congress MLA from Puducherry, has challenged the appointment of the three MLAs in the Madras High Court.

Kiran Bedi’s intervention in the day-to-day affairs of the Union Territory was blatant from Day One. She created four WhatsApp groups specially for government employees to announce their work and plans for the welfare of people. This was strongly objected to by Chief Minister Narayanasami. He warned the employees not to use the WhatsApp groups to announce their work as this practice would be against the Officials Secrets Act.

A Seetharaman, a retired Puducherry government employee, said: “She started personally calling senior bureaucrats to Raj Nivas and initiated discussions with them about various schemes of the government. This irritated the ministers because they were kept in the dark about these decisions.”

He added: “On the one hand, these bureaucrats have to answer to the ministers and on the other, they have to also convey the developments to the Lt-governor. Nowhere in the country will you witness a situation where a bureaucrat is forced to answer two bosses. This is a Catch-22 situation for Puducherry bureaucrats.”

People in the know of things say that a certain ambiguity in the constitution must be blamed for this fiasco. “The constitution is rather silent on this matter. It does not say anything in a crystal-clear manner about the powers enjoyed by the Lt-governor and by an elected government. The general practice was that the government recommends to the Lt-Governor the names of those to be nominated to the assembly as MLAs and the latter forwards the same to the Union home ministry. Then the centre will nominate them to the assembly. This was the practice followed for ages here. But now the centre wants to usurp that power and the result is the present situation,” said N Nandivarman, a local politician.

Several constitutional experts feel that the present situation has the potential to evolve into a major crisis not only politically but also legally. But they feel that eventually the issue will be settled in favour of the Union government that has overriding powers over Union Territories. Perhaps knowing this, Bedi is playing a tug-of-war with an elected government.