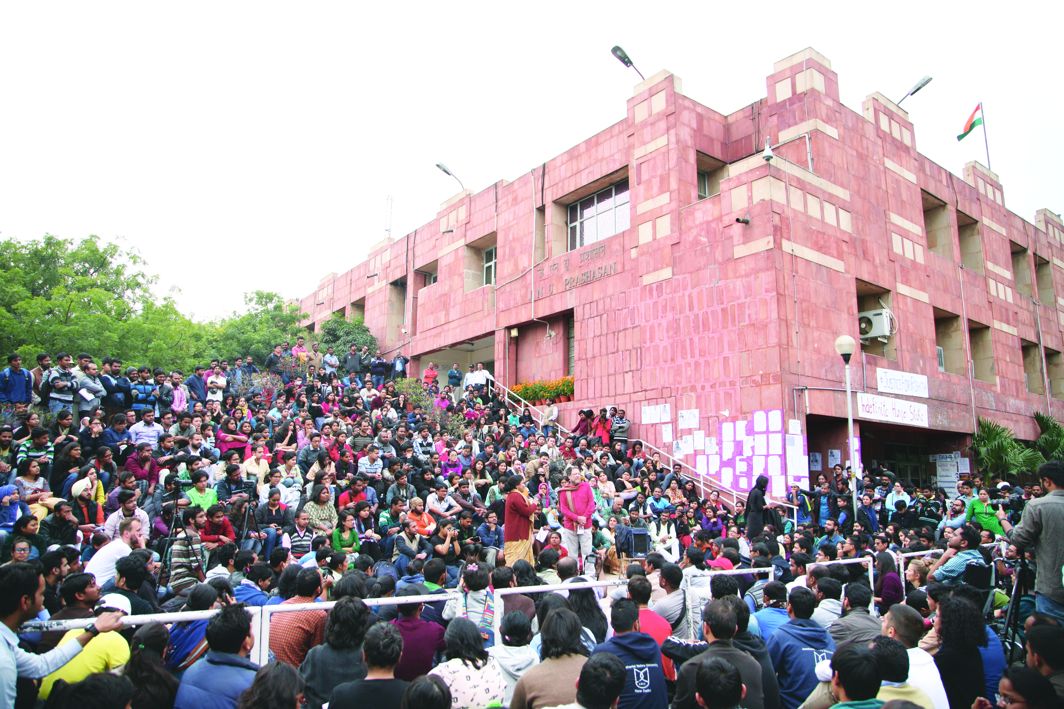 Above: Students protesting on the Jawaharlal Nehru University campus in 2016. Photo: Anil Shakya

The student unrest across university campuses is due to a resource crunch initiated by the UGC which has affected scholarships, fellowships, infrastructure and research

The protests started by the students of the Tata Institute of Social Sciences (TISS) since February 21 over the withdrawal of fee waivers to SC, ST and OBC students show no signs of abating. Officials from the Ministry of Human Resource Development (MHRD) and the University Grants Commission (UGC) are to visit the campus and meet the protesting students but what is worrisome is that the unrest has spread to many other universities as well. The reason behind the unrest is the lack of funds from the UGC.

The UGC currently distributes about Rs 1,050 crore annually as higher education tuition fee/fellowship to about 82,000 beneficiaries through 35,000 fellowships each year. This represents around 200 scholarship schemes of the MHRD as well as other ministries. However, the numbers are constantly being reduced. In 2015, the UGC decided to withdraw non-net fellowships given to students and has been announcing the discontinuation of funds to several research centres especially those which study social discrimination. The UGC’s decision in 2015 was severely opposed by the students of different universities who launched a campaign against the government, named “Occupy UGC”. The sit-in protest at the UGC’s ITO headquarters resulted in the then HRD minister, Smriti Irani, assuring the students that the decision would be revoked. Since then the government has increased the withdrawal of scholarship schemes and added stringent clauses to existing ones. 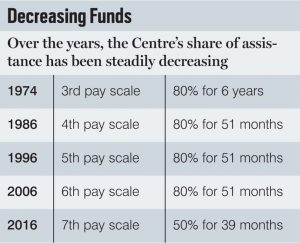 Prof Suranjan Das, Vice-Chancellor of Jadavpur University, had openly criticised the discriminatory nature of funding by the UGC. While speaking at the 62nd annual convocation of the university, Das said: “The nature of UGC funding mechanism, i.e. 65 percent allocation of its annual budget for only 47 central universities and 35 percent funding for 375 state universities, is a reflection of the discriminatory nature adopted by the UGC.”

The UGC had sent a note to Delhi University stating that the implementation of the Seventh Pay Commission was dependent on the Office of Memorandum dated January 13, 2017 and that the varsity will have to generate 30 percent of the funds required through internal resources. Are our universities capable of generating funds on their own? Former President of the Delhi University Teachers Association (DUTA) Shashwati Majumdar says it is not possible. “In public funded universities the doors are open to children from all sections of society. The government is supposed to provide education at an affordable cost. Instead, it is using its position to undermine the autonomy of the institutions in the sense of pushing them towards privatisation,” she told India Legal.

Dr Kumar said that the resource crunch was so high that there is not sufficient money for basics like infrastructure. “The funds can only be generated by increasing the fees of the students, and if the fees are increased then the students will protest and the entire university will be in turmoil,” said Dr Kumar.

There are nearly 6, 000 vacant teaching posts in the central universities of the country along with three universities awaiting a vice-chancellor. The vacancies are likely to increase given the UGC’s new notification—to set departments and not the entire college/university as a unit to fill faculty positions from SC, ST and OBC categories. The Allahabad High Court had passed an order in April 2017 which was later upheld by the Supreme Court, resulting in the UGC sending proposals to the MHRD stating that the reserved posts should be filled department-wise. The explanation given was that if the university is set as a unit then some departments may have only reserved candidates whereas some may have only unreserved candidates.

Prof Majumdar agrees that reservation should not be concentrated only in some departments but she says that the problem with this system is that it will lead to a slowdown in filling of posts. “Since some of the departments are small, you will have to wait till somebody retires for the posts to be filled,” she said.

The more the number of vacant faculty posts, the worse will be the professor-to-student ratio in research and that will result in massive seat cuts in MPhil and PhD courses, like in JNU. The number of MPhil/PhD seats for the academic year 2017-18 was reduced from 1,000 to 194. This was the result of the UGC notification restricting the number of research scholars a faculty could supervise.

Adding to the turmoil is the threat that the government is ready to dismantle the UGC. The TSR Subramanian Committee report, which was submitted in May 2016, recommends the closure of the UGC. The report recommends that the body, which currently performs three primary functions—overseeing the distribution of grants to universities/colleges, providing scholarships/fellowships, and recognising universities—should be allowed to lapse and instead a new body overseeing higher education should be formed.

The report also recommends scrapping of other higher education regulators such as the All India Council for Technical Education (AICTE) and the National Council for Teacher Education (NCTE) and merging them into one body. “…the mandates of UGC, AICTE and NCTE, regulators in the higher education sector, set up under different laws, should be reviewed in the light of the proposed National Higher Education Promotion and Management Act,” states the report.

The reason the report proffers for scrapping the UGC is that the body “does not have the adequate number of personnel, of requisite quality, to be an effective regulatory force in the higher education sector”. The body, which has to cover several aspects of higher education including recognition, accreditation, curriculum approval, permission to start courses, disbursement of grants to institutions, and management of scholarship programmes, is not given proper funds to do so—a fact that the report acknowledges. Anil Chowdhary, convenor of the Popular Education and Action Centre, sees it as a deliberate move to crush public education. “A lot many private universities have come up but they are not getting good students because meritorious students go to institutions like Delhi University and Jawa-harlal Nehru University. So, how will the private universities get their clients?”

The New Education Policy (NEP), considered to be one of the major reforms that the Modi government intends to push, seems controversial. The then HRD minister, Irani, had appointed former cabinet secretary TSR Subramanian to draft the NEP. The Committee, which worked for two years, was later replaced by the Kasturirangan Committee headed by former ISRO chief K Kasturirangan. The Committee has already been given three extensions with the first extension being in December 2017. Dr Kumar said that the Committee, which is to submit its report on March 31, has consulted no prominent educationists or other stakeholders in the field.

It is tragic that the government, on whom lies the onus of providing education to its citizens, is itself proving to be the biggest roadblock.