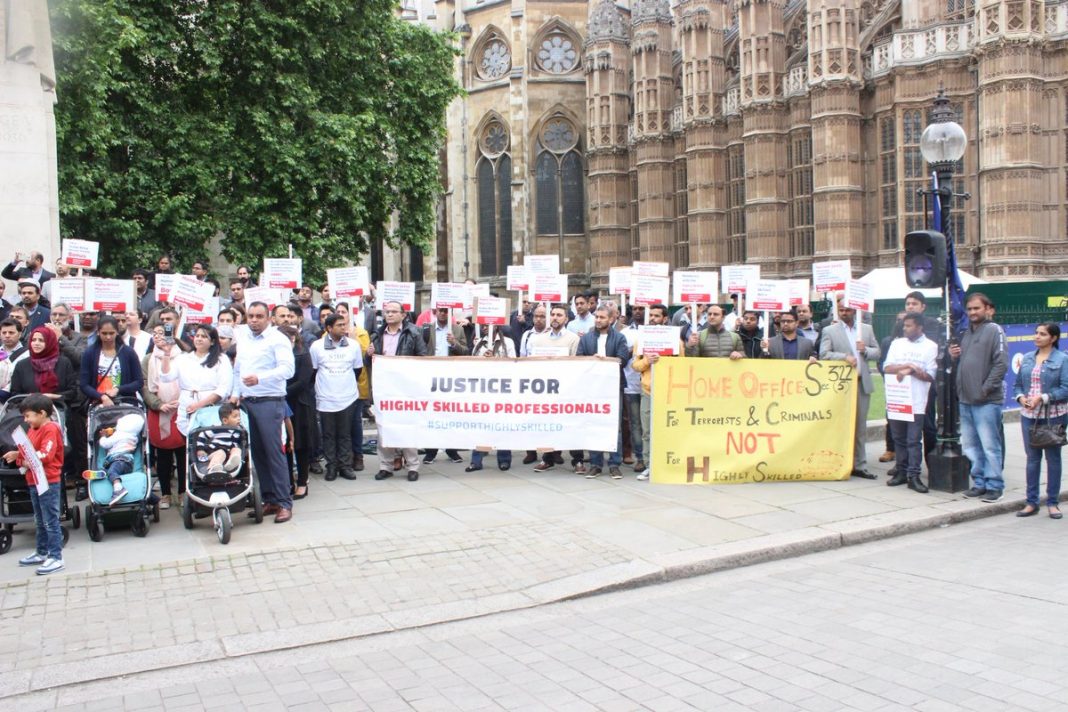 Above: Highly-skilled migrants to the UK, who have been seeking equity, can hope for a bright future in the light of new visa proposals/Photo: @HighlySkilledUK

In a gladly received move, the biggest overhaul of Britain’s immigration system will be undertaken where skills rather than nationality will matter. This will create a level playing field for all migrants

There is good news for Indians wanting to migrate to the United Kingdom. British Home Secretary Sajid Javid has published a White Paper that sets out new immigration rules in which migrants will be issued visas on the basis of their skills and talent and not their nationality.

In what is being described as the big­gest overhaul of Britain’s immigration system in 40 years, European Union nationals will lose their current preferential status and migration targets will be scrapped. “We are taking a skills-based approach to ensure we can attract the brightest and best migrants to the UK,” said Javid, who is himself the son of Pakistani immigrants to Britain. Calling the proposals the “biggest change to our immigration system in a generation,” Javid said he would be ending the current dual system of admitting only highly skilled workers from outside the EU and workers of all skill levels from the EU, and will be creating a level playing field for all migrants.

The much-delayed White Paper also announces the complete removal of a cap on the number of work visas issued. Currently, only 20,700 Tier 2, five-year work permits are issued per year to highly skilled employees from outside the EU. The cap was imposed by There­sa May when she was home secretary.

It ends the need for resident labour market tests by UK employers in which businesses have to advertise positions to British workers first and can bring workers from abroad only if there are no suitable domestic candidates.

However, there is no need for potential Indian migrants to start queuing up for British visas just yet as these proposals, even if they get passed in parliament and become a bill, will only come into effect from January 1, 2021, after Britain has left the EU and completed the post-Brexit implementation period. If Brexit does go through on March 29 this year, it will end the right of EU nationals to come into the UK without visas and work freely.

The Brexit referendum has been predominantly won on the basis of “ending free movement” of people and decreasing migration into the UK. The proponents of Britain leaving the EU had promised their constituency that Brexit would stop migrants “coming over and taking their jobs”. While this had gone down well among a large section of the white British population, even some Indian-origin immigrants had voted for Brexit, believing that stopping free movement from the EU would mean more of their relatives from India would be able to come to the UK.

Ironically, after the referendum, racist attacks on South Asian immigrants increased as right-wing nationalists, who were emboldened by winning the Brexit vote, saw it as an opportunity to end immigration from everywhere, not just the EU. More incidents were reported of white supremacists telling South Asians to “go home”.

Prime Minister May has been a longstanding advocate of lower immigration levels. Even as home secretary, she had promised that she would bring net immigration down to below a lakh. After she took up the prime minister’s post in 2016, she has repeatedly stressed that the central message of the Brexit referendum was a demand that migration be controlled and she has vowed to do it.

Javid, who is known to be close to May, has in his proposal avoided mentioning an explicit cap on the total number of migrants who will be allowed into Britain after Brexit. He said there would be “no specific target” under the new system, which would instead focus on achieving a level of migration that is “sustainable for our economic need but at the same time is not too high a burden to our communities or our infrastructure”. While this is certainly better than the current cap, it also does not mean that an unlimited number of migrants will be allowed in—it simply gives the government the chance to choose and change the number as it sees fit. With the May government’s obsession with lower levels of immigration, “sustainable” is bound to be a figure in the tens of thousands as promised in the Conservative Party manifesto.

Though the new system which “favours experience and talent over nationality” has been welcomed by some Indians, it is specific. The new skilled work visa will be open to non-EU and EU citizens alike, but will have a lower annual salary threshold of £30,000 and will require sponsorship from an employer just like the current Tier 2 visas. What it will not need is the resident labour market test, and the skilled applicant does not need to be a graduate, but can have intermediate education up to “A” Levels (Higher Secondary in India). Those who come in on this visa will be able to bring dependents, extend their stay and settle permanently.

Critics argue that it is impossible for many skilled professions to meet the £30,000 per year minimum income guarantee as salaries for some professionals are not so high. For example, the Indian restaurant industry has suffered badly due to the immigration rules until now which insisted that jobs should be given to domestic employees first. They were not allowed to bring in Indian chefs and had to be content with non-Indian employees who often could not pronounce the names of the Indian dishes, let alone cook them. With the resident labour market test no longer applicable, restaurants can bring in staff from India, but the £30,000 per year salary will be a difficult hurdle to cross.

Another area of concern is the National Health Service which is essentially run by immigrants. Saffron Cordery, deputy chief executive of NHS Providers, has warned that a high salary threshold would have a disastrous impact on the health service. “You have got starting salaries for nurses at £23,000, also for paramedics and midwives. Junior doctors’ starting salaries at £27,000, healthcare assistants at £17,000, all coming in way below that £30,000 cap,” said Cordery. Currently, the NHS in England alone employs 63,000 EU nationals and if they all leave, the NHS will collapse.

It is believed that Chancellor of the Exchequer (finance minister) Philip Hammond, Business Secretary Greg Davis and Javid himself had expressed concern in private about potential staffing shortages resulting from the salary threshold and supported a far lower cut-off at £21,000 per year. However, May had resisted the proposal, hoping that cutting the supply of cheap foreign labour will act as an incentive for businesses to train home-grown staff. Not convinced by May’s argument, Javid has left a window open by insisting that a final salary threshold would be confirmed only after further consultation.

To make up for the predicted shortfall in low-skilled labour, the White Paper announced a short-term workers scheme which will only be for 12 months without the option to extend. This scheme will only allow citizens from “low-risk countries”, but it is not clear if India falls in this category. “This new route will only be available for nationals of specified countries, for example those low risk countries with whom the UK negotiates an agreement concerning the supply of labour, including returns arrangement,” says the White Paper.

Jim Bligh, chair of CII UK India Business Forum, told India Legal: “Indi­an industry has long called for a fair, transparent and skills-based immigration system and the proposals go some way to achieving these goals. Tackling the UK’s skills gap, particularly in digital and technology, must remain a key focus for government and it is welcome that this paper recognises the value that skilled workers from overseas can bring to helping improve UK’s skills base.”

May hopes that by refusing to offer EU migrants preferential treatment, it will help to unlock future trade deals with non-EU countries such as India. With only three months before the Brexit deadline, the end result of the negotiations is still uncertain. Whether this White Paper finally becomes a law will have a lot to do with what eventually happens by the end of March.