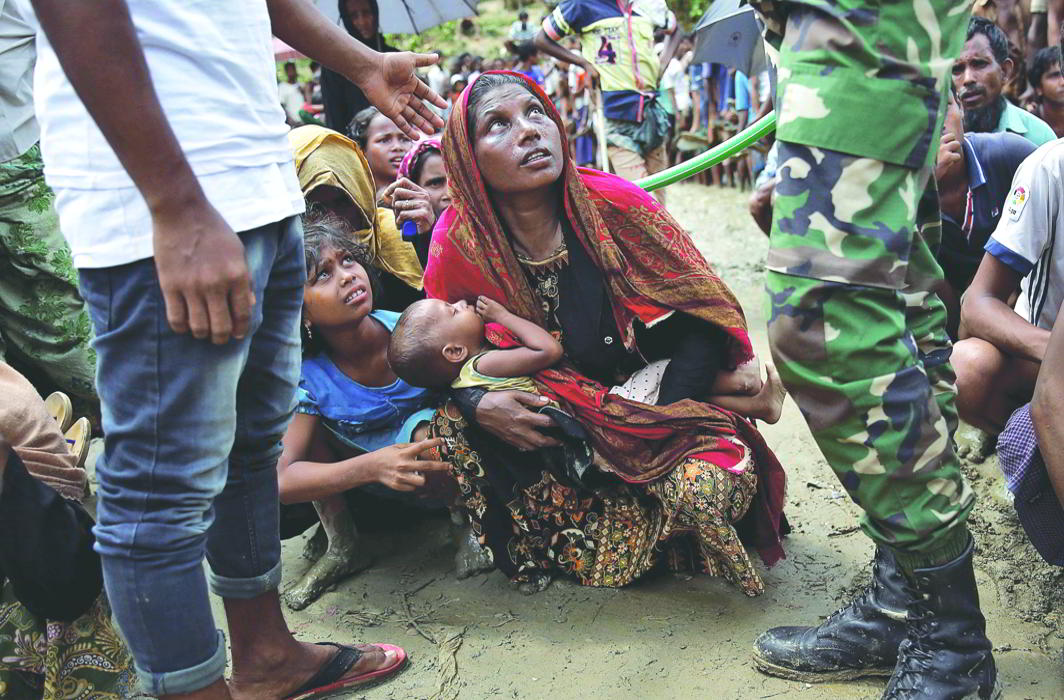 As some five lakh people fleeing Myanmar pour into Bangladesh, questions are being raised about why it shouldn’t be tried for genocide

Even as the Supreme Court of India is hearing the pleas of Rohingyas in the country, Bangladesh is facing a crisis of gigantic proportions. Some five lakh Rohingya refugees who fled Myanmar’s western Rakhine state, have sought refuge there, plunging the country into a humanitarian nightmare. UN Secretary-General António Guterres said: “The situation has spiralled into the world’s fastest developing refugee emergency and a humanitarian and human rights nightmare.”

The plight of these refugees has gripped the world and Burmese leader Aung San Suu Kyi was condemned worldwide for not doing enough for them. Even the honour of the Freedom of Oxford given to her was withdrawn recently and Hugh’s College, Oxford, removed her portrait from display. Suu Kyi has not responded to suggestions of the UN to visit Rohingyas in Rakhine and in Bangladesh.

And adding to the stern condemnation of this Nobel Prize winner was the Permanent People’s Tribunal (PPT), an internationally recognised tribunal, which accused Myanmar of committing genocide on the poor. The seven-member panel said: “The state of Myanmar is guilty of the crime of genocide against the Rohingya group. The casualty of the genocide could be even larger in future if nothing is done to stop it.”

The PPT was established in 1979 and since its inception, has had an international network of experts, activists and scholars. It has given a clarion call to the UN and other international bodies to act for bringing the Myanmar authorities to book for “committing the genocide”.

Taureen Afroz, a Dhaka-based prosecutor with the International Crimes Tribunal of Bangladesh (ICTB), told India Legal: “This is the first time that the PPT delivered a verdict of such a big dimension accusing a government having a link with a Nobel laureate, Aung San Sun Kyi. She is now facing growing criticism over the Rohingyas. It’s clear that Myanmar is committing genocide against the Rohingyas. The verdict has helped their cause and it is drawing the world’s attention.”

Mirza Fakhrul Islam Alamgir, secretary-general of the opposition Bangladesh National Party (BNP), has questioned Prime Minister Sheikh Hasina’s demand that “safe zones” be established under UN supervision in Myanmar for the protection of people irrespective of their religion. “Sheikh Hasina’s demand in the UN General Assembly for a safe zone would mean creating another Palestine. The BNP opposes this demand. Myanmar will have to take back Rohingyas ensuring their dignity, respect and right. If the Rohingyas are kept isolated in the so-called safe zones, repressions on them will continue. The fact remains that Myanmar had launched aggression against Bangladesh by forcibly pushing its citizens into our country,” he said.

In Cox’s Bazar here, doctors in makeshift clinics have reported rape and horrific sexual abuse of Rohingya women who fled from Rakhine. Doctors at a clinic run by the International Organisation for Migration (IOM) treated many women with injuries from violent sexual assaults. In clinics run by the Bangladesh government, 19 cases of rapes were reported.

The UN High Commissioner for Refugees (UNHCR), Filippo Grandi, who visited Rohingya camps in Bangladesh, described their exodus as the “most urgent refugee emergency in the world. People have fled unspeakable violence and their needs are enormous”. Grandi was thankful to the Bangladesh government which kept its borders open to facilitate the arrival of the suffering Rohingyas. “In a world that is hostile to refugees, Bangladesh has shown exemplary character. Just like the causes of the influx are in Myanmar, clearly the solution is in Myanmar as well. The Rohingyas need a permanent solution to ease their immediate suffering. Though the UNHCR and the World Food Programme have their presence in Rakhine, our movements are restricted,” admitted Grandi.

He said the solution to the crisis lay in the refugees returning voluntarily to Myanmar from Bangladesh. “In order for this to happen, conditions have to be changed in Rakhine state. The issues are citizenship, violence, discrimination and poverty. Myanmar should do the registration of all such people who fled it and went to Bangladesh. The international community should come out with multiple aids as Bangladesh alone cannot cope with the situation,” he added.

Intellectuals in Bangladesh have demanded invoking Responsibility to Protect (R2P) against Myanmar. R2P is a global commitment endorsed by all UN member states to prevent genocide, war crimes, ethnic cleansing and crimes against humanity. Mir Aftabuddin Ahmed, a scholar at international relations at the University of Toronto, said: “The Bangladesh government has recognised the Rohingya crisis as being under the category of ethnic cleansing. As a norm, it demands that national governments essentially do not take sovereignty for granted. R2P is based on the principle that sovereignty requires a responsibility to protect all population from mass crimes and human rights violations. The Myanmar government’s failure to protect the Rohingyas makes a strong case for an intervention by the international community, either through taking measures stated in the R2P framework or by involving regional powers like China and India.”

That is easier said than done.