Awash in Apathy: Nothing learnt from 2013 cloudburst, hydropower marches on in Uttarakhand

Despite flash floods affecting many lives in the state and the apex court imposing a moratorium on hydro-electric projects, three central government ministries have reached a consensus on allowing them, leading to a dangerous trend. 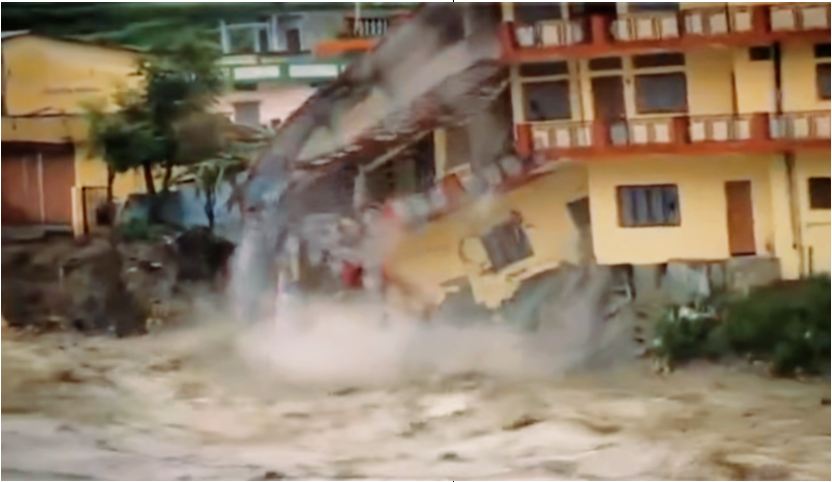 The Kedarnath flood was a catastrophe that led to over 5,000 casualties. On June 16, 2013, a cloud burst over the banks of Chorabari Lake near Kedarnath Temple caused it to overflow. The water carried enormous amounts of silt and rocks, and led to the destruction of four hilly districts in Uttarakhand—Uttarkashi, Rudraprayag, Chamoli and Pithoragarh. Nearly 2,052 houses were wiped out, and bridges and roads damaged.

Though the ravaging flood was an after-effect of the cloud bursting, many environmentalists believe that the Kedarnath tragedy was a man-made one due to unplanned and unmethodical construction. This includes mining in this sensitive ecosystem and construction of dams and hundreds of roads.

Ironically, a month before these floods, the apex court had reserved judgment in Alaknanda Hydropower Co. Ltd. vs Anuj Joshi. It related to a matter of environmental clearance granted in 1985 to a concrete gravity dam project named Srinagar (Uttarakhand) Hydro-Electric Power Project on Alaknanda river, planned by the Uttar Pradesh State Electricity Board in Tehri, Pauri-Garhwal district for enhanced capacity of 330 MW. The Alaknanda Hydro­power Co. Ltd. was aggrieved by the decision of the Uttarakhand High Court directing the Ministry of Environment, Forest and Climate Change (MoEF& CC) to hold a public hearing for clearance of the project before allowing the dam’s enhanced capacity to 330 MW and increasing its height.

Immediately after the disaster, a Supreme Court bench of Justices KS Radhakrishnan and Dipak Misra took suo-motu cognizance of the Kedarnath tragedy. In Alaknanda Hydropower Co. Ltd. vs Anuj Joshi, the Court, after reserving this matter a month before the tragedy, expressed concern over the mush­rooming of a large number of hydroelectric projects in Uttarakhand and its impact on Alaknanda and Bhagirathi river basins. The bench led by Justice Radhakrishnan observed the cumulative impact of construction such as dams, muck disposal, tunnels, mining and blasting around the natural habitat of the region. The bench took into account the three reports commissioned by the MoEF.

The first was by IIT, Roorkee in 2011, which the Court refused to rely on as it said that it blindsides the cumulative impact of project components like construction of dams, tunnels, blasting, power-house, muck disposal, mining, deforestation, etc. The report stated that Rs 3,000 crore had already been incurred on various hydropower projects in Alaknanda and Bhagirathi river basins and if work was not resumed at the sites, it would be against national interest, the benefit of the local people, project specific local area development and hydropower development in the country.

The second report by Wildlife Institute of India (WII) in 2012 was considered the best among the three. It stated that out of a total of 39 proposed hydropower projects, 24 were found to be significantly impacting bio-diversity in the two sub-basins. The combined footprint of all 24 projects have been considered for their potential to impact areas with biodiversity values, critically important habitat of rare, endangered and threatened species of flora and fauna and Indian Wildlife (Protection) Act, 1972 projected species, it said.

The third report by the Inter-Ministerial Group in Issues Relating to River Ganga in March 2013 highlighted the impact of the implementation of 69 hydropower projects with a capacity of 9,020.30 MW being proposed in Bhagirathi and Alaknanda basins. It said these projects have extensive implications for other needs of this society and the river itself. The report noticed that the implementation of all the above projects will lead to 81 percent of River Bhagirathi and 65 percent of River Alaknanda getting affected. Also, there are a large number of projects which have very small distances between them, leaving little space for the river to regenerate and revive.

The Supreme Court in Anuj Joshi on August 13, 2013, observed that “the adverse effect of the existing projects under construction and proposed, on the environment and ecology call for a detailed scientific study. Proper Disaster Management Plan, it is seen, is also not in place, resulting in loss of lives and property”. The Court directed the constitution of an expert body to study the effect of hydroelectric projects on the environment and a specific study of the impact of 24 projects on all the on-going hydropower projects and the Disaster Management Authority.

It also said that Uttarakhand had to submit a report whether it had any disaster management plan in place and how effective it was to combat the unprecedented tragedy in Uttarakhand. The bench, furthermore, imposed a temporary halt on granting of clearances to large hydroelectric dams in Uttarakhand.

The suo-motu cognizance taken by the Supreme Court in Uttarakhand was the result of several ongoing cases, along with publicity by media channels after the raging floods. In April, 2014, an expert body led by environmentalist Ravi Chopra submitted its report, which agreed with the WII’s recommendation. The MoEF in its affidavit stated that hydropower projects aggravated the disaster. In an order on May 7, 2014, passed by a bench led by Justice Radhakrishnan, the Court refused to allow MoEF’s plea for constitution of another expert committee and asked for concrete reasons for this. It continued to stay the construction of 24 projects.

After Justice Radhakrishnan retired on May 14, 2014, the case moved to the bench of Justice Dipak Misra and Justice Gopala Gowda. On August 12, 2014, the bench led by Justice Misra opined that it had only stayed grant of clearance to the 24 projects mentioned in the WII list and only allowed six projects which had received environmental clearance before the date of tragedy to be considered by MoEF&CC.

Thereafter, several expert body reports were filed that were impleaded on different dates. In February 2015, a four-member committee led by Vinod Tare, IIT Kanpur, gave the heads up for the six projects but expressed concern regarding their serious impact on the ecosystem. However, the ministry only placed on record the nod given by the Tare committee, ignoring the fact that the committee had also expressed its concern. The Supreme Court on May 2015 directed the formation of another committee led by BP Das, who, on a later date even after giving a heads up to the six projects, recommended further consultation by other stakeholders.

In November 2015, the centre submitted before the Court that the MoEF&CC, the Ministry of Water Resources, River Development & Ganga Rejuvenation and the Ministry of Power would jointly work on a policy framework for these projects. In January 2016, the MoEF proposed a policy decision based on the Ganga Mahasabha Agreement of 1916 to allow hydropower project that releases at least 1,000 cusecs of water into the Ganga. However, questions were raised as to how a document dating 100 years back could become the basis for deciding the fate of the people. The agreement stated that 1,000 cusecs of water would flow unfettered across the ghats of the city at all times at the time when there were no dams around.

With the apex court allowing the formation of multiple committees and yet being indecisive of the outcome, several questions were raised. As both Uttarakhand and the centre were led by the BJP, in November 2017, the former emphasised the operation of these hydro­power projects for its socio-economic development and in January 2018, the power ministry seconded Uttarakhand’s stand.

In January 2019, the ministry of Jal Shakti gave its nod to back seven projects, which had already made substantial progress, with caution that no more hydropower projects be allowed in the Ganga basin in Uttarakhand. Meanwhile, the PMO recommended a permanent ban on such projects where construction had not reached the halfway mark. Thereafter, the Das committee in March 2020 filed a final report.

The Supreme Court has had no effective hearing for the past five years in this matter. Memories of the 2013 tragedy were revived when in February 2021, a flash flood hit two hydropower projects in Chamoli district, claiming many lives. Thereafter, on August 17, the centre, sidelining the concerns of the recurring tragedy, submitted an affidavit before the apex court stating that the decision was based on a joint decision by three Union ministries—MoEF, Jal Shakti and Power—to give the heads up to the seven hydropower projects and that these projects, being in an advance stage of completion, would meet all necessary requisites during the environmental clearance.

However, the question remains the same—would the apex court after eight long years of imposing a moratorium on clearing hydro-electric projects following the flash flood concur with the findings of the Union government and give a nod to the development?