The Delimitation Commission for Jammu and Kashmir has recommended a division of assembly seats for the Jammu and Kashmir region. Local opposition leaders have cried foul, but how credible was the exercise that led to the decision? 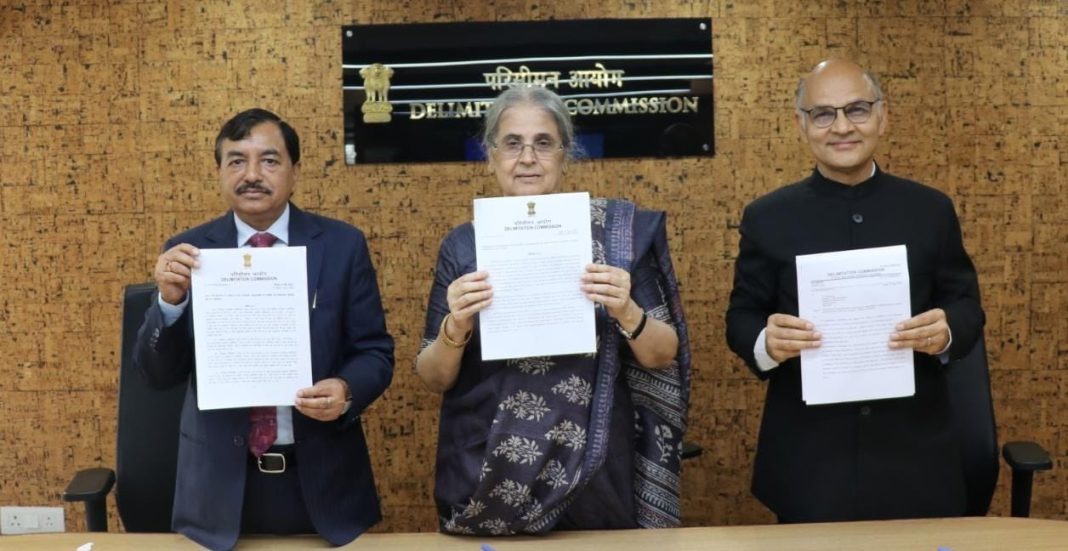 The Delimitation Commission for Jammu and Kashmir (J&K) on May 5 finalised the delimitation order and submitted it to the Election Commission of India where it has recommended 43 assembly seats for the Jammu division and 47 seats for the Kashmir region. Besides retired Supreme Court judge Ranjana Prakash Desai, who chaired the panel, it was also signed by the two other ex-officio members, Chief Election Commissioner Sushil Chandra and State Election Commissioner of J&K KK Sharma. The Commission also worked with five Lok Sabha MPs from J&K, nominated by the Lok Sabha Speaker as associate members. They were National Conference MPs Farooq Abdullah, Mohammad Akbar Lone and Hasnain Masoodi, Union Minister of State in the Prime Minister’s Office Jitendra Singh, and Jugal Kishore Sharma of the BJP.

According to the Commission, out of the five Lok Sabha seats, two seats each will be in the J&K division, while one seat will be in the shared area of both.

A proposal to reserve two seats for the Kashmiri Pandits has also been given by the Commission. The term of the Delimitation Commission ended on May 6.

Sushil Chandra, chief election commissioner, said: “We have ensured that the assembly constituencies are limited to one district because earlier it used to be that assembly constituencies were divided into many districts”. The Commission said that they have taken J&K as one area instead of taking it as two separate areas. It has also approved the name or regional change of some assemblies.

The Commission had visited J&K twice and interacted with 242 delegations before preparing the report. It recommended an increase of seven seats.  With this, the number of seats has now increased from 37 to 43 in Jammu, and from 46 to 47 seats in Kashmir. However, the Jammu region has got six more seats, while only one seat has come in the Valley. This is also a major reason for the Opposition’s displeasure.

PDP chief Mehbooba Mufti has rejected the report. As per media reports, she said that the Commission has overlooked the basis of population and acted as per its wish and the recommendations are only a part of abrogation of Article 370… how to make people powerless in J&K.

Under sub-section (2) of Section 9 of the Delimitation Act, 2002, and Part-V of the Jammu & Kashmir Reorganisation Act, 2019, the Commission published its draft proposals, for the delimitation of parliamentary and assembly constituencies in the Union Territory on the basis of the relevant published figures of the 2011 Census, inviting objections and suggestions in relation to the aforesaid proposals by March 21, 2022. The Commission’s order no 1 and the proposed draft proposals of the Commission were published in the local newspapers on March 14, 2022, and given further publicity through the local media.

Despite that, local political leaders still insist that the Kashmir region has got a raw deal and claim political motivation behind the elaborate exercise.