Myanmar coup: Military back in business

Aung San Suu Kyi’s huge win in the November polls in Myanmar probably triggered the coup because the armed forces feared losing their influence over the election of the president and second vice-president. 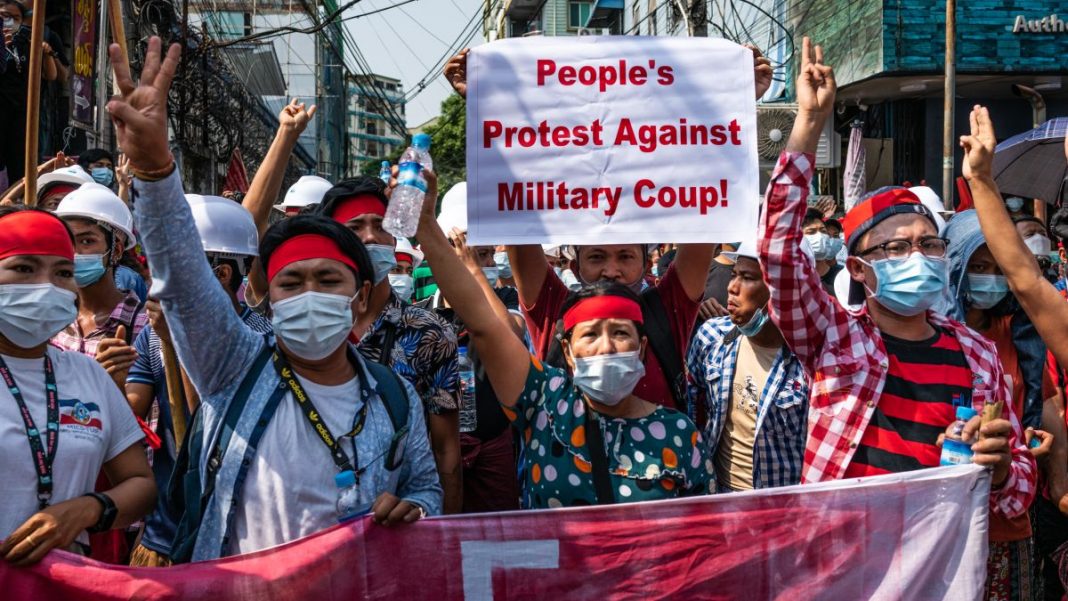 A week after carrying out a bloodless coup on January 31, Myanmar’s military chief Senior General Min Aung Hlaing made an official statement. The coup was triggered after the military, known locally as Tatmadaw, refused to accept the results of the November 8, 2020, general election, alleging electoral fraud. It is a matter of detail that the allegation was rejected not only by the Union Election Commission (UEC), but also by international observer groups.

The Tatmadaw chief announced a year-long emergency and justified the coup as the UEC of the Aung San Suu Kyi led government failed to take the military’s complaint seriously. The UEC action came under “acts or attempts to take over sovereignty of the Union by…wrongful means” under Article 417 of the Constitution. If the argument is accepted, the Tatmadaw’s action is legal, because the Constitution is loaded in favour of the armed forces.

The military regime arrested 11 political and government leaders, including President Win Myint and the de facto president, Senior Counsellor Suu Kyi and placed them under house arrest. It also remembered to arrest some of the activists of the “88 Generation” movement, which triggered the people’s protest against military rule in 1988 and elevated Suu Kyi as the leader to spearhead the national struggle for democracy.

In a televised address, General Min Aung said the ruling junta would form a “true and disciplined democracy, different from the previous eras of military rule”. This is an oxymoron of sorts because the military has ruled Myanmar for nearly five decades from 1962 to 2008. The statement brings to mind the pithy quote from George Orwell’s satirical classic 1984: “We are different from the oligarchies of the past in that we know what we are doing. All the others, even those who resembled ourselves, were cowards and hypocrites…. We are not like that.”

The General added that the election commission must be reformed to carry out a free and fair election. He promised: “We will have a multi-party election and we will hand over power to the one who wins the election, according to the rules of democracy.” Of course, he did not indicate any time-frame for holding the election. The ruling junta held the first multi-party election in 1991, but never accepted the results when Suu Kyi fought to end military rule and restore democracy and led the National League for Democracy (NLD) to a thundering victory.

After the failure of the “democratic experiment”, the Tatmadaw rulers took nearly two decades to craft the present 2008 Constitution, which perpetuates the military’s role in governance and legislature. It enables the Tatmadaw chief to appoint ministers in the ministry of defense, border affairs and home affairs which appoints key personnel who control police forces and the biggest economic entity of the country the Myanmar Economic Corporation.

In the legislature, the Tatmadaw picks officers to occupy 25 percent of the seats reserved for the military in the Constitution. In fact, the Constitution has many warts, which gives the Tatmadaw enormous influence in tinkering with governance. The last point in Min Aung’s statement was “to make a request for every citizen that everyone should go with the true facts and not follow feelings of your own”, resonating with the Chinese pro­verb: “There are three truths. There is my truth, your truth and THE Truth.”

The coup came as no surprise because General Min Aung had been threatening to do so ever since the NLD won a whopping 315 of the 440 seats in the House of Representatives, the lower house of parliament. In the upper house, the NLD captured 115 of 244 seats. The military’s political proxy the Union Solidarity and Development Party (USDP) came a distant second and was sidelined as a political force.

The elections were held despite the Tatmadaw chief’s objections in the midst of the Covid-19 pandemic and after intensified operations against the Arakan Army insurgents in Rakhine state. During her five-year rule as the de facto president, Senior Counsellor Suu Kyi had suffered a double whammy. She lost her international recognition and adulation as a democratic icon, after she compromised on her promise to make the country a full-fledged democracy. On the other hand, she stoutly defended the Tatmadaw’s role to ward off allegations of genocide carried out against the Rohingya minority, in the International Court of Justice in The Hague. This was seen as a betrayal of her credentials as a fighter against military rule.

In spite of her tribulations, Suu Kyi’s huge success in the elections showed her undiminished popularity and support among the people. This was, probably, a moment of truth for the Tatmadaw chief that prompted him to carry out the coup. General Min Aung was also probably disillusioned with the failure of the 2008 Constitution the military had designed to safeguard the Tatmadaw’s interests, particularly its self-assumed role as the ultimate arbiter of the nation’s destiny.

It would be trivialising the issue to say that the General carried out the coup to stay in power because he was about to retire. A more relevant reason is probably the fear of the Tatmadaw losing its ability to influence the election of the president and second vice-president. After the NLD’s huge success, it gained control of 86 percent of the seats in the Assembly of the Union (235 in the House of Representatives and 135 in the House of Nationalities), which acts as the Presidential Electoral College for election. This gives the NLD more than the 67 percent majority needed to elect its own nominees for the two top posts.

The NLD’s success has made the role of the pro-military bloc (consisting of military nominees and the USDP) irrelevant in selecting its favourite candidates for the top jobs in the government and the legislature. The military chief also probably realised that the era of using Tatmadaw created political proxies in elections, was coming to an end, after most of the voters ignored the USDP. The election has also exposed the limitations of Tatmadaw’s use of fringe elements among the majority ethnic Bamar community and Buddhist clergy to whip up ethno-religious sentiment to support it and the USDP.

The biggest obstacle to the country’s democracy is the Tatmadaw’s mindset, groomed by General Ne Win, who described himself as its surrogate father. The maverick general’s rule from 1962 to 1988 spelt the death knell for democracy because Ne Win firmly believed “parliamentary democracy was not suitable for Burma”.

Ethnic minority insurgent groups had been fighting the Tatmadaw since independence to protect their distinct identity in a federal democratic set-up promised by General Aung San. The prolonged ethnic insurgency has made the Tatmadaw consider itself the true guardian of the nation, reflecting General Ne Win’s considered: “Federalism is impossible, it will destroy the union.” This has affected the credibility of the government’s efforts to persuade over 14 ethnic insurgency groups to join the mainstream. As a result, Suu Kyi’s efforts to kindle General Aung San’s famous Pangong Spirit of federal democracy with the participation of all ethnic groups, have failed to transform the situation.

As stated earlier, the 2008 Constitution gave the Tatmadaw enormous powers to tweak both the government and the legislature, affecting the country’s democratic credentials. So the UK, EU and Australia were quick to condemn the military takeover. US President Joe Biden threatened to reinstate sanctions. ASEAN members have largely kept mum. China, the giant neighbour with strategic stakes in Myanmar, urged all sides to “resolve differences”. China also blocked a UN Security Council statement condemning the coup, in keeping with its policy of opposing international intervention in Myanmar.

India, the largest democracy with close relations with both the Myanmar government and the military, has the difficult task of looking at the coup beyond the strategic binary of India’s troubled relations with China. India has reacted with a cautious statement, expressing “deep concern”. It said: “India has always been steadfast in its support of democratic transition of Myanmar. We believe the rule of law and the democratic process must be upheld.” For the time being, India is waiting and watching the developments in Myanmar. Its policy in the past had been against international intervention in Myanmar.

There have been massive protests against the coup in many cities in Myanmar for the last few days. In keeping with the trend of other protests in many countries, there is increasing youthful participation. The Myanmar army is notorious for its ruthlessness in handling public protests in the past. Though, in the first three days of protest, police had used water cannon to disperse the crowds, it is using rubber bullets and live firing, which resulted in the death of a woman on February 2, 2021.

Much would depend on how the ruling junta handles the protests in the coming days. It knows the world has come a long way since the 1988 protests, which turned bloody, by violence unleashed on the people. So it may attempt going slow to keep the protests manageable.