The son of the death row convict has sought forgiveness from President Ram Nath Kovind in what seems to be a last-ditch effort to save her life. She had killed seven members of her family in 2008. 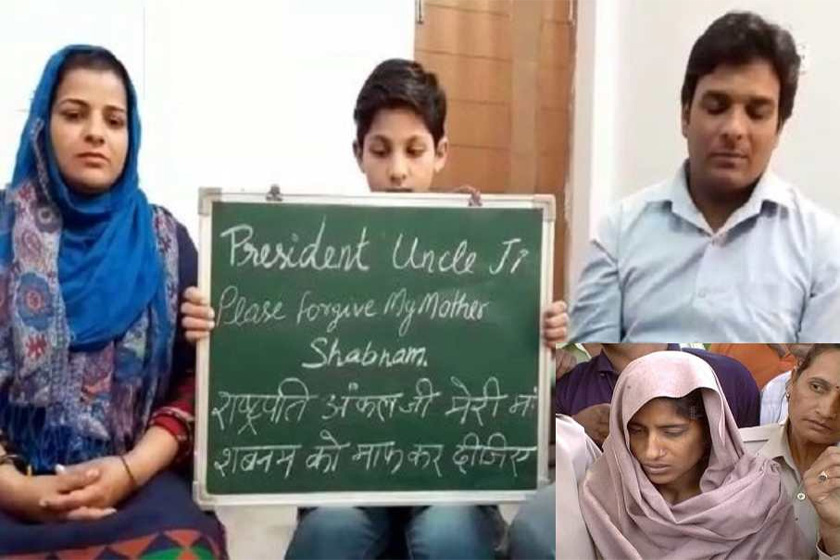 A second mercy petition has been filed before President Ram Nath Kovind by the 12-year-old son of Shabnam, a death row convict, seeking to convert her capital punishment to life imprisonment. If the President rejects the mercy plea, Shabnam will be the first woman to be hanged for a crime after Independence at Mathura jail, the only one in India with the provision to hang a woman convict.

Shabnam, along with her lover Saleem, was convicted of killing seven members of her family including a 10-month-old child in Amroha in western Uttar Pradesh on April 14-15, 2008. Both were arrested five days after they committed the crime.

Shabnam belongs to the Saifi Muslim community and lived in Amroha. A post-graduate in English and Geography, she worked as a shiksha mitra (government school teacher). Her family was opposed to her relationship with Saleem, a  Class VI dropout, who worked at a wood sawing unit and belonged to the Pathan community.

In January last year, the chief justice of India rejected their mercy plea. The latest mercy petition to the president seeks that the capital punishment be commuted to life imprisonment based on the case of Renuka Shinde and Seema Mohan Gavit. Both the sisters were convicted of kidnapping and killing several children in Maharashtra towns between 1990 and 1996.

In 2010, the lower court found Shabnam and Saleem guilty of mass murder and punished them with capital punishment. The judgment was later upheld by the Allahabad High Court in 2013 and the Supreme Court in 2015.

Shabnam’s first mercy plea was filed on the grounds of her responsibilities towards her son, Mohammad Taj, which was rejected by the then Uttar Pradesh Governor Ram Naik and the then President Pranab Mukherjee. However, the hanging was delayed as the court which issued the black warrant did not mention the date and time of its execution.

In 2014, the Supreme Court by giving life term to 15 death row convicts held that “death sentence of a condemned prisoner can be commuted to life imprisonment on the ground of delay on the part of the government in deciding the mercy plea”. (Shatrughan Chauhan & Anr vs Union of India.)

Shabnam can still challenge the rejection of her mercy petition before the Allahabad High Court and the Supreme Court. She can file a curative petition in the apex court against the decision on the review petition. Moreover, both of them must exhaust all their legal options together before the hanging actually takes place because they must be hanged together as per the law.