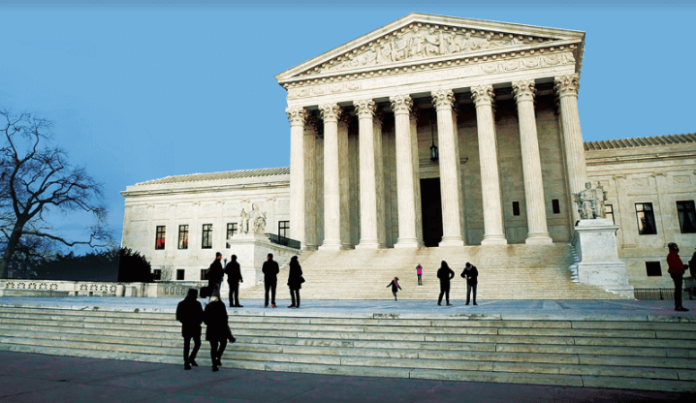 Virginia Thomas, whose husband is Justice Clarence Thomas, was revealed to have played a role as a right wing organizer supporting Donald Trump’s fraudulent efforts to stay in office despite losing the 2020 presidential election. Is this consistent with the behaviour expected of a Supreme Court judge’s spouse? That answer will be difficult to agree upon, but the details confirm the alarming behaviour of Trump’s senior staff and friends as he lost the White House.

There is a code of conduct for all federal court judges and their families, except for the Supreme Court justices.

The work and political life of Justice Thomas’ wife has been questionable for much of the three decades that he has been on the Court. It is the e-mails and text evidence submitted to the House Committee investigating the January 6, 2021, insurrection at the Capitol that has blown this into an issue greater than mere appearance. The emails from Virginia Thomas, who prefers “Ginni” as a first name, were between her and then White House Chief of Staff Mark Meadows, just days after the election. These were found in material subpoenaed by the House Committee probing the January 6 insurrection.

To prevent these documents being turned over, the Trump administration went to court seeking an injunction and it was judge Ketanji Brown Jackson, at the expedited Appeals Court level, who wrote the denial of the White House claim of immunity, saying, “The president is not a king.” At the Supreme Court, only Justice Thomas voted in favour of President Trump’s claim.

There was evidence within those documents that showed how intimately involved Ginni Thomas was in the Big Lie campaign pushed by the White House as well as the January rally that preceded a riot on Capitol Hill.

Former CBS journalist Dan Rather, who famously asked in the 1974 impeachment of a president: “What did President Nixon know and when did he know it?” recycled the question referring to Justice Thomas.

Conservative Republicans are still angry that Donald Trump is now a former president, having lost the 2020 presidential election. The recent events and insinuations, involving both Judge Jackson and Ginni Thomas, speak directly to the ideological anger that the Republicans are preparing to use as their key element in the upcoming mid-term elections in November 2022.

The role of the court, the third branch of the federal system, has always been a hot button issue. This was amplified after the 1954 decision against racially segregated education, because the court interpreted the 14th and 18th amendments as preventing state governments from passing laws which conflicted with the Constitution’s “equal protection” requirement.

Nebraska Senator Ben Sasse, who had poked fun at his colleagues for their absurd attacks on Judge Jackson, played the good guy first, saying: “Judge Jackson has impeccable credentials and a deep knowledge of the law.” But then, he made it clear that his opposition was based on the GOP position about how the justices should think. He said that she “refused to embrace” the judicial philosophy of originalism, which would unravel abortion rights, as well as most of the other civil rights decisions that most Americans believe are settled law, firmly in our legal system and no longer open to debate.

The rights that the Republicans recently mentioned while attacking Judge Jackson included the right to use birth control, access abortion, marry across racial lines, and marry a same-sex partner. Basically a return to the mis-remembered era before 1954 when Dwight Eisenhower was US president, Indian democracy was seven years old and Jawaharlal Nehru was the prime minister of India.

It all started with the Republican senators failing to question Judge Jackson on serious issues. Questions were only incidentally asked about her judicial qualifications, as she had twice been approved for federal judgeships. Instead, they challenged her decisions with half-facts or with sarcasm. Three Ivy League-educated lawyers did not do much for the value of legal education as they badgered her endlessly and rudely. As an African-American woman with the highest credentials, she did not let them bait her into a viral-style response. The showboating makes sense if you know that several Republicans on the Senate Judiciary Committee have presidential aspirations if Trump doesn’t run in 2024. So, they played bad cops, hoping for the Fox News soundbyte, while the Democrats asked the Harvard law school graduate about several legal issues as well as her life’s story.

A newly-appointed black woman replacing a retiring Democrat does not upset the 6-3 Conservative super majority on the current Supreme Court. The “performative” behaviour was just for voters the GOP wants to keep angry. The Republicans could not resist being outraged at things they claim the Democrats did in similar hearings going back 40 years. Many GOP senators focused their opening statements on the 2018 hearings for Justice Brett Kavanaugh’s confirmation. He was credibly accused of sexual assault, but neither the committee nor the FBI followed up with a credible investigation.

Senator Ted Cruz, whose problems with language are normal, described the Kavanaugh suitability issues as a matter of “teenage dating habits”. The accusation of sexual assault had nothing to do with dating but nobody on either side seemed to even tacitly acknowledge that distinction.

The committee will vote on her nomination on April 4 and then it goes to the full Senate. Because the two political parties are balanced with 50 members each, a tie-breaking vote there, if needed, comes from Vice-President Kamala Harris.

The First Amendment to the US Constitution brought together several threads of democracy that hadn’t been included in the original document. It prohibits the establishment of a national religion and creates a special role for news media. James Madison, a key writer and thinker of the Constitutional period and later fourth president of the new USA, wrote that an established religion attacked the fundamental human right—an unalienable right—of conscience. If lawmakers could destroy the right of freedom of conscience, they could destroy all other unalienable rights, he said.

Today, Republican lawmakers talk—and act at the state level—to restrict popular civil rights based on religious beliefs. Making voting difficult is a way for a minority to keep power over the majority.

In responding to the Ginni Thomas emails, Mark Meadows, then Trump’s chief of staff, wrote: “This is a fight of good versus evil,” on November 24, 2020, in a text about overthrowing the will of the voters after Joe Biden had won the presidential election. Referring to Jesus Christ, Meadows continued: “Evil always looks like the victor until the King of Kings triumphs…. The fight continues….”  Meadows himself has a legal problem in North Carolina where he is under investigation for using a friend’s mountainside mobile home as his voting address despite not actually living there.

—The writer has worked in senior positions at The Washington Post, NBC, ABC and CNN and also consults for several Indian channels.