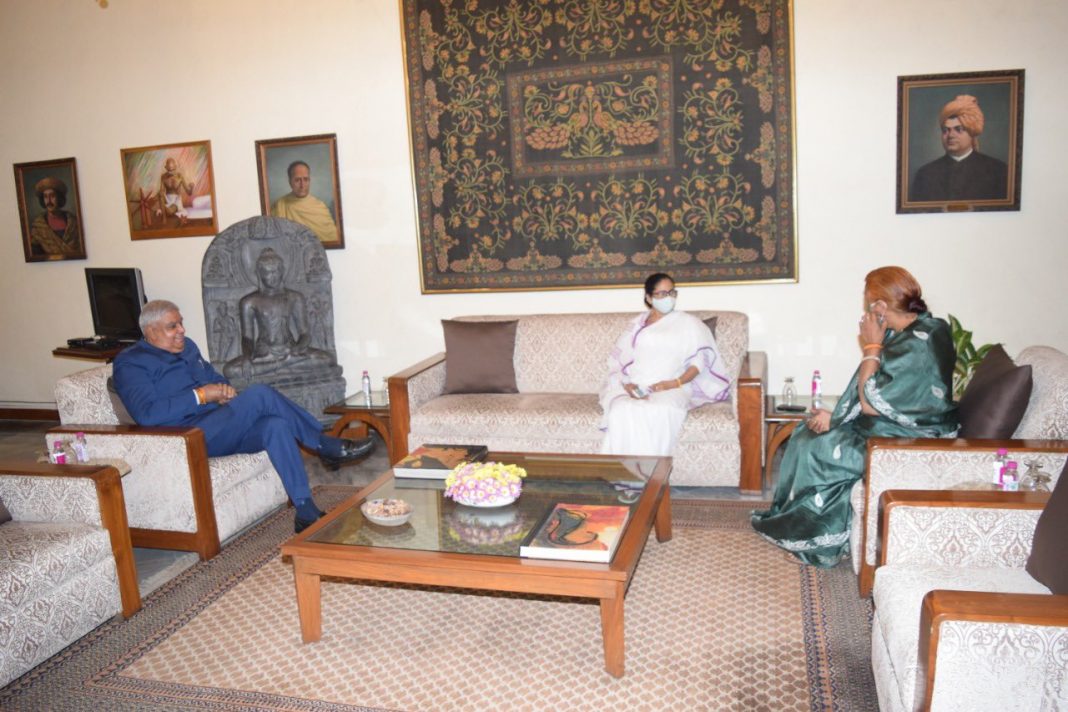 The long-standing heated exchange between the governor and the TMC government over political issues has caused a constitutional impasse. What lies ahead?

The West Bengal assembly with 294 seats will go to polls in April-May 2021 but it has been over shadowed by rancorous exchanges between Governor Jagdeep Dhankhar and the state government. Recently, the Trinamool Congress submitted a memorandum to President Ram Nath Kovind requesting him to remove Dhankhar for his failure to preserve, protect and defend the Constitution and added that he was “transgressing constitutional limits”. The signatories to the memorandum were Sudip Bandyopadhyay, Sukhendu Shekhar Roy, Kalyan Banerjee, Kakoli Ghosh Dastidar and Derek O’Brien.

They alleged that the

“governor had repeatedly breached the law declared by the Supreme Court. From the seat of the highest Constitutional office in the state, he has been inducing divisive politics, just because ruling parties at the centre and the state are political opponents. The governor holds office during the pleasure of the President as per Article 156, Clause 1. We have urged the President to withdraw the pleasure, which translates into removing this governor”.

Addressing a press conference at Trinamool Bhavan, Roy alleged that the governor was deliberately spreading canard to tarnish the image of the state government and Trinamool Congress to keep his bosses at the centre in good humour. “Not only has he lowered the post of the governor but flouted the Indian Constitution and law of the Supreme Court,” he said, adding, “Bengal had great governors like Chakravarti Rajagopalachari, Harendranath Mukherjee, BD Pandey, Professor Nurul Hasan, Gopal Krishna Gandhi, among others. Nowhere in the country one finds a governor holding press conferences and is vocal through tweets to tarnish the image of the state government and the chief minister.”

Alleging that Dhankhar had been making such statements in public at the behest of the BJP led government at the centre to embarrass the TMC government in the state, Roy said: “This had never happened earlier in the 75-year-long history of West Bengal. If he has to say anything, he can communicate that in the way as provided to him by the Constitution, not by tweeting or holding press meets.” Roy cited Dhankhar’s statement seeking expense details of the Bengal Business Summit, his demand for an apology from the chief minister over some of her recent comments and his “threat to 25 IPS officers” as instances of the governor “violating his rights and limitations”.

“He has also said it is his duty to ensure free and fair polls. Who is he? It is the domain of the Election Commission. Similarly, only the CAG (Comptroller and Auditor General of India) has the authority to seek details of the expenses of state organised events like the Bengal Business Summit.”

“A constitutional head chosen by the centre cannot interfere in the functioning of the state in this way. It is akin to interference in the parliamentary system. He is intentionally doing these things. He is not fit to occupy the seat of the governor which had been occupied by many illustrious personalities since Independence.”

Earlier, Dhankhar had said that “free and fair elections without fear are not held in the state.” The governor said it does not concern him for whom the people vote, but it is his duty to make sure that they get to exercise their franchise without any intimidation. He also urged the government machinery to be neutral during the West Bengal assembly elections. He had also slammed the Trinamool for maligning “Bengali culture” after BJP President JP Nadda’s convoy was attacked and when the TMC supremo dubbed the BJP an “outsider” in Bengal. The governor has also accused Mamata Banerjee of ignoring his calls and letters on multiple occasions and treating him like “a rubber stamp”.

Reacting to the recent development, BJP national general secretary Kailash Vijayvargiya said the governor is performing his constitutional duty as he finds that the state government is not performing its functions properly within certain parameters.

“I don’t think the TMC’s action of moving the President for the removal of the governor will have any impact. The President will go by his own understanding of the governor’s role. The governor is acting within the constitutional parameters as the head of the state. The TMC is doing this as it is scared,”

Amid all this rancour, CM Mamata Banerjee met Dhankhar at the Raj Bhavan but it is unlikely to have any effect on the constitutional impasse.

The Supreme Court on Monday while hearing the special leave petition of a Maharashtra government official, who is accused of raping a minor girl asked whether he was he was ready to marry the victim.
Read more
news

However, after the court noted that Centre has no role in recruitment of doctors at IHBAS, the court deleted it from the memo of parties.
Read more
India Legal
Did you find apk for android? You can find new Free Android Games and apps.