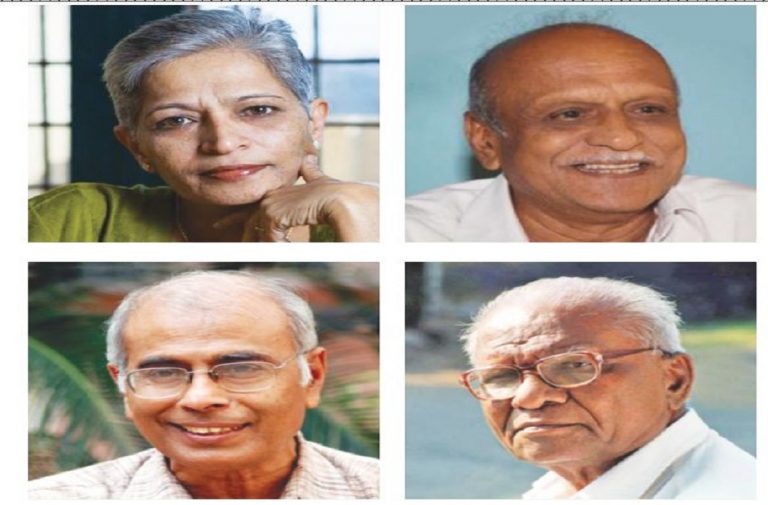 The apex court has asked the CBI if there is a common link in the killings of Gauri Lankesh, MM Kalburgi, Govind Pansare and Narendra Dabholkar. But the families prefer the SIT probe go on

Though 16 months have lapsed since the cold-blooded murder of journalist Gauri Lankesh in Bengaluru and even as the Karnataka Special Investigation Team (SIT) is hot on the trail of the killers, the Supreme Court recently asked the CBI if it had come across any “common thread” in the alleged murders of Lankesh and writer MM Kalburgi in Karnataka, and activists Govind Pansare and Narendra Dabholkar in Maharashtra.

The bench of Justices UU Lalit and Navin Sinha was hearing a plea by Kalburgi’s widow, Uma Devi, who had sought an SIT probe into his death. Justice Lalit asked the CBI if “you established or found any prima facie material that there is a common link? If yes, we will hand over the other cases to you”.

However, the families of Lankesh and Pansare are set to oppose any move to hand over the probe into their deaths to the CBI. Lankesh’s sister, Kavitha Lankesh, a filmmaker, told India Legal that “the Karnataka SIT has already rounded up 16 suspects and major work on the murder case has already taken place. The SIT officials have already established the connection with Gauri’s killing and at this stage for the probe to be given to the CBI will not really help”.

The SIT, led by Inspector General of Police BK Singh, has used high-tech means such as artificial intelligence and algorithms to scan CCTV images to find a lead in the case. It interviewed more than 2,500 people, went through 10,000 images of two-wheelers and filed a nearly 9,200-page chargesheet in September 2018 with exhaustive details. In August 2018, the SIT also invoked the stringent Karnataka Control of Organised Crimes Act in the Lankesh case as it was believed there was a larger conspiracy behind the crime.

The SIT faced some criticism in the beginning as it took almost six months after Lankesh’s death to get its first breakthrough. It scored a big victory when it picked up one KT Naveen Kumar from Maddur in the Cauvery heartland of Mandya, an hour’s drive from Bengaluru. The SIT alleged that Kumar had a key role in the murder and was also planning to kill Mysore-based rationalist KS Bhagavan. Kumar’s handler, Praveen, however, slipped off the radar, scuttling the probe for a few weeks. While on the trail to nab Praveen, the SIT managed to come across Amol Kale, Amit Degvekar and Manohar Edave, who were major players in the killing. Diaries recovered from them led to a series of arrests. The SIT probe also led to several arrests in Maharashtra and the uncovering of a plot to bomb a music concert in Pune. Even the missing pieces in the murders of Dabholkar and Pansare were found.

The CBI and the Maharashtra SIT have now arrested Kale, Degvekar and Rajesh Bangera, all accused in the Lankesh, Dabholkar and Pansare murders. “Even the CBI found some of the work done by the SIT very crucial,” said Kavitha. She hoped that the Karnataka government would not agree to hand over the investigation to the central agency, in which case, she said, she would go ahead and implead herself in the matter before the Supreme Court and oppose the move.

Coming to the Supreme Court, the CBI, which is already probing the Dabholkar murder on the directions of the Bombay High Court as well as the Supreme Court, told the bench that if there indeed was any “common thread” between the four killings, then “it will be in the fitness that the rest (of the cases) is also (brought) under the same agency”. The CBI counsel, however, said he would seek instructions and get back to the Court.

The counsel for Maharashtra told the Court that the Pansare and Dabholkar murder cases were being monitored by the Bombay High Court. The chargesheet had already been filed in a Pune court in the Dabholkar case and five accused had been arrested, while in the Pansare case the matter was pending trial in Kolhapur.

The Karnataka police told the apex court that it will file a charge sheet in the Kalburgi murder case by March 2019. Kalburgi, aged 76, was shot dead outside his house in the north Karnataka city of Dharwad on August 30, 2015. The SIT found common links in the killings of Kalburgi and Lankesh.

In November 2018, the apex court had pulled up the Karnataka government for “doing nothing and just fooling around” in the investigation and had indicated that it may transfer the case to the Bombay High Court. In January 2018, the apex court had sought the response of probe agencies NIA and CBI and the two state governments on the allegation made by Kalburgi’s widow, Uma Devi, that no substantial investigation had been carried out so far in the case. The centre had responded that the case didn’t come under the jurisdiction of the NIA which is a special agency authorised to probe national and inter-state terrorism cases.

The Karnataka SIT, during the course of the investigation, found that several other rationalist thinkers were also on the hit list of the suspects linked to the killings. Kalburgi’s son, Sreevijaya, expressed his faith in the judiciary and said the family wanted justice.

That echoes the feelings of Lankesh’s family too.