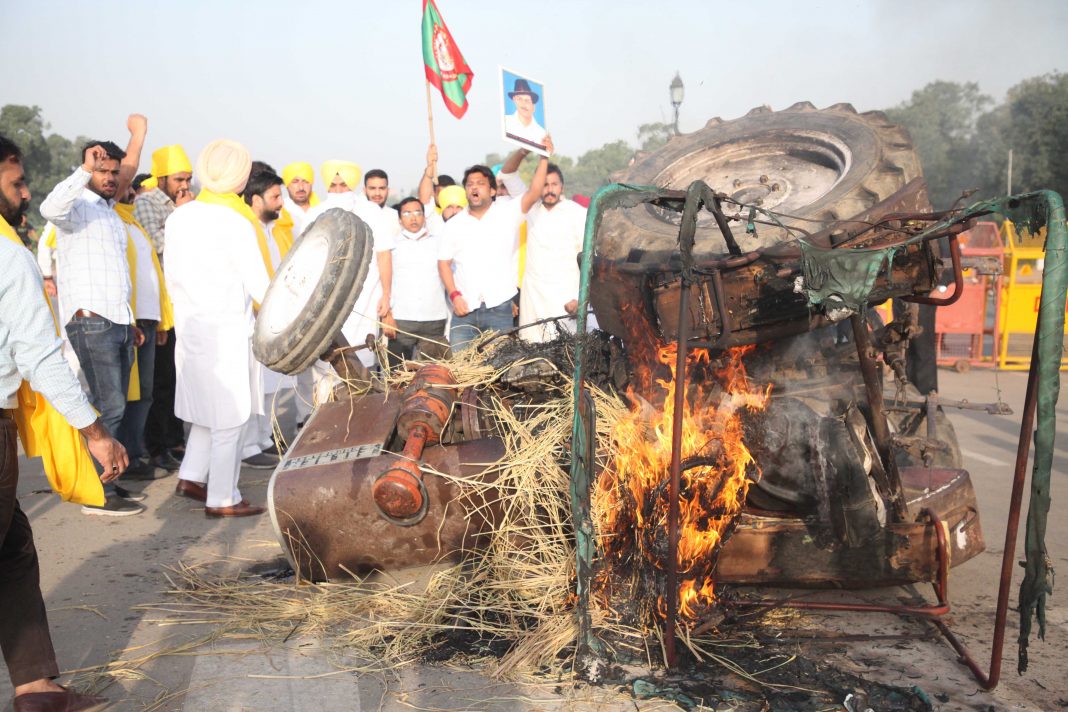 The laws are seen as anti-farmer and corporate friendly and opposition to them has reached the Supreme Court. Some states like Punjab are also looking to amend their mandi Act

The passing of the three contentious farm Bills has triggered massive protests by farmers, especially in Punjab, Haryana and Maharashtra, and led the Opposition to severely attack the government. This angst took a dramatic turn on September 28 when Youth Congress members set a tractor on fire at India Gate in Delhi in protest.

The Bills, which have now become Acts, are the Farmers’ Produce Trade and Commerce (Promotion and Facilitation) Act, 2020; the Farmers (Empowerment and Protection) Agreement on Price Assurance and Farm Services Act, 2020 and the Essential Commodities (Amendment) Act, 2020.

The Opposition has called the new laws anti-farmer and corporate friendly and asked the government to take them back. On September 28, Congress MP from Kerala TN Prathapan moved the Supreme Court, challenging various provisions of the new farm laws.

He said that the Agricultural Produce Market Committee (APMC) mandis were created to protect the farmers from ex­ploitation by intermediaries. Without the APMCs, the market would ultimately succumb to the greed of multinational companies. Corporates focus only on profit and have no care for the conditions of poor farmers whose livelihood depends on farming, he said.

In Punjab, Chief Minister Amarinder Singh held a sit-in protest against the farm laws in Shaheed Bhagat Singh Nagar on September 28. He said that most of the farmers in the state were marginal and they would be severely impacted by these legislations.

He accused the Union government of trying to dismantle the farming system in the country. Reports suggest that Punjab, the largest contributor of wheat and rice to India’s central pool, might also be looking at amending its mandi Act to declare the entire state a Principal Market Yard. This would nullify the central law prohibiting the imposition of any tax or cess on out-of-mandi transactions. Also, on October 4 former Congress president Rahul Gandhi joined farmers’ protests in Punjab and Haryana to kickstart a Kisan Yatra.

Meanwhile, in August, when the Bills were yet to become laws, Rajasthan had already passed an order designating all warehouses of the Food Corporation of India and State Ware­housing Corporation as mandis, there by retaining its powers to charge mandi fees.

However, Prime Minister Narendra Modi slammed the Opposition for its protests and said it was fighting for middlemen and not for farmers. He said the burning of the tractor by protesters at India Gate was an insult to the farmers and alleged that the Opposition was misleading the farmers. Modi said small and marginal farmers were the happiest today as, for the first time, they had an alternative method to bargain for the price of their produce. The tradition earlier was to sell it in mandis. If a farmer thinks that he will benefit by selling there, he will sell there, and if he thinks the benefit was more outside, he will sell outside, the prime minister added.

He said the Minimum Support Price (MSP) will continue and farmers will have the freedom to sell their produce anywhere in the country. He said that some people were in trouble because the reforms would shut one more avenue for acquiring black money.

The BJP has now decided to conduct a 15-day public awareness campaign for farmers on the three laws. BJP spokes­person Prem Shukla said that the party would strive to make farmers aware about the provisions of these laws, which would help them come out of the clutches of middlemen and increase their income. He said the protests in different states were fuelled by middlemen as they were the ones who would be severely hit by the new legislations. The government is focusing on empowering farmers, from the time the seeds are bought till the produce reaches the markets, he added. Assuring the farmers, he said that MSP and government procurement would continue.

Meanwhile, the BJP Kisan Morcha of Chandigarh organised a tractor rally in favour of the new farm laws. Farmers from surrounding rural areas joined the rally under the leadership of Kisan Morcha national president Rajkumar Chahar. Speaking to the media, Chahar said the legislations were in the interests of farmers and would help them increase their incomes.

Despite these promises of barrier-free trade at markets, a day after the farm bills became law, around 50 farmers from Uttar Pradesh were stopped in Haryana’s Karnal from selling their crops in state-run mandis. However, a top official of the Haryana government had reportedly said that there was no law which bars farmers from other states from selling their produce in Haryana. There was a portal where farmers needed to upload their details so that it would be easier for the government to buy from them, but because of Covid-19, procurement has been staggered.

The new laws have also seen protests in Maharashtra. The agitation was fuelled by the Congress, the NCP and the All India Kisan Sabha. Maharashtra Deputy Chief Minister Ajit Pawar on September 25 said that farm laws and labour code reform legislations won’t be implemented in the state as these legislations were passed in a hurry. Prakash Shamrao Patil, a veteran farmer and Congress worker from Solapur, said that the overburdened bureaucracy would not be able to solve the farmers’ dispute at the district level. Moreover, officials at that level were vulnerable to pressures and allurement from both politicians and corporates. How can a small farmer stand firm in front of such forces, he asked. Hence, the courts needed to intervene to provide justice to a farmer, he added.

He said that the APMC mandi structure was performing well in Maharashtra and this must prevail. These laws will not do any good to farmers as the quality of produce was a subjective matter and depended on many natural factors such as rainfall, which these laws had failed to address, he said. While middlemen were not an issue in Maharashtra, he said, lack of proper water resource management had led to farmers’ suicides in Vidarbha.

Umesh Patil, a local NCP leader, said these laws were anti-farmer and they wouldn’t be able to safeguard their interests once corporates enter the race. This would make Maharashtra farmers more vulnerable to suicide, he stressed. The farmers were not consulted during the law-making process and hence, these laws won’t be able to solve the problems of local farmers. The laws were one-sided and fail to tackle the real grievances of farmers. The MSP clause should have been mentioned in the new legislations, he said. Though there were problems with state-regulated mandis, sidelining them was not the way forward.

Farmers had failed to get adequate output from their produce because of which they found it tough to repay debts taken from banks and other private lenders at exorbitant interests. As agriculture comes under the Concurrent List, the state government will come up with its own legislation keeping Maharashtra farmers’ concerns in mind, he added.

A farmer and kisan union leader from Punjab, Sukhvinder Singh, called the new farm Acts “black law” and said that only the Adanis and Ambanis would be benefitted by them and farmers’ produce wouldn’t get appropriate money. He asked why there was a need to push these legislations in such a short span of time without consulting farmers or listening to the Opposition. This shows the dictatorial nature of the current regime, which doesn’t think of farmers’ welfare. The protesting farmers feel that the laws could pave the way for the dismantling of the MSP system, leaving them at the mercy of big companies.

If the intent behind the farm laws was to do good for the farmers, then the government needs to proactively work to allay the fears of farmers, especially poor and marginalised ones who feel more vulnerable to private players. Moreover, the government needs to take the arguments of the Opposition into consideration keeping the spirit of cooperative federalism in mind. This is something the government had advocated in the last regime and both the Union and states need to sit together to bridge the differences.

However, the real impact of these farm Acts can be gauged only after they are implemented at the grassroots level. As per reports, small and marginal farmers form 86 percent of the farming community and contribute about 50 percent of crop output. The government needs to do away with the bottlenecks faced by this vulnerable group and gradually infuse capital and technology to make this vital profession profitable.