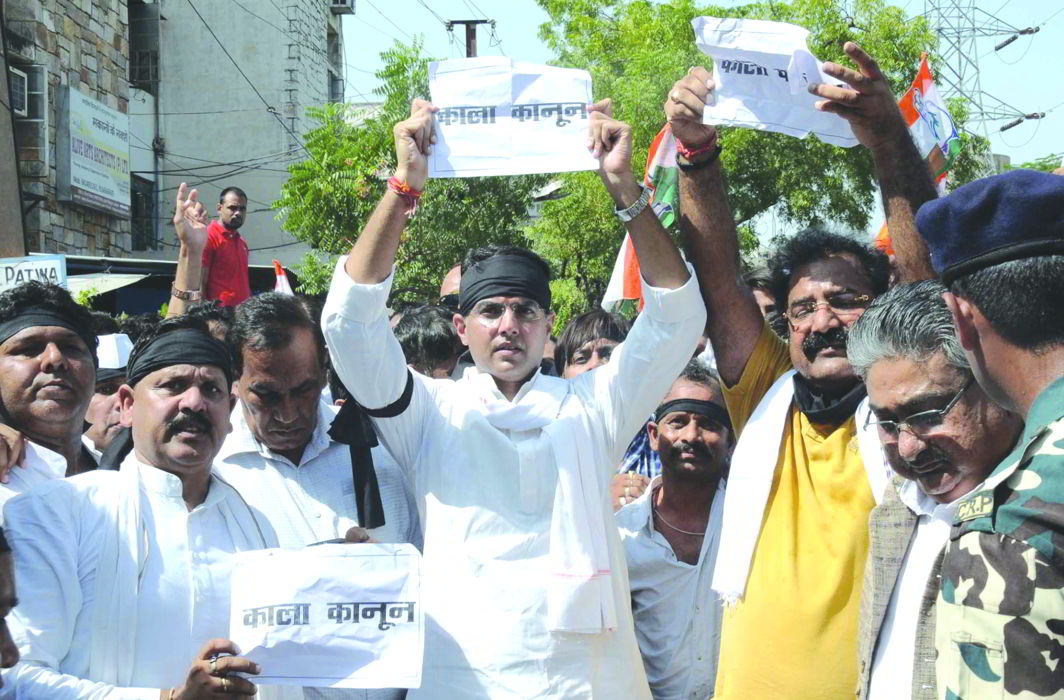 Even as an ordinance to amend the CrPC in Rajasthan was deferred, a PIL has been filed in Bombay High Court against an amendment that seeks to grant protection to corrupt bureaucrats

On October 23, the BJP-led Vasundhara Raje government in Rajasthan tabled The Criminal Laws (Rajasthan Amendment) Bill, 2017 in the assembly. The Bill, seeks to amend the Code of Criminal Procedure (CrPC) and created a furore. It said that prior sanction will be required by the police to commence investigations against public servants and judges for alleged corruption while discharging their official duties. After drawing flak from all quarters for “amending the law to protect the corrupt”, the government backtracked and sent the Bill to a Select Committee, effectively putting it in cold storage.

However, a similar provision inserted in the criminal law by Maharashtra is now facing a constitutional challenge in court. Lawyer-activist Abha Singh has filed a PIL in Bombay High Court contending that the Devendra Fadnavis-led government’s latest amendment to the CrPC helps corrupt bureaucrats. Section 197 of the CrPC says that “if an offence is committed by a public servant while acting or purporting to act during discharge of his official duty, sanction may be necessary before the court takes the cognisance of the offence”.

The police registers FIRs only for cognisable offences—serious offences such as murder, corruption, rape, and so on—where an arrest can be made without a warrant. As soon as an FIR is registered, the police acquires the power to investigate. Once that is complete, the police prepares a chargesheet, challan or final report recommending punishment and submits it to the magistrate. After looking at the chargesheet, if the magistrate feels there is substantial material to start a trial against the accused, he will be said to have taken cognisance of the offence. However, instead of requiring government sanction only before the step of cognisance, the new ordinance disallows even investigation without prior approval.

Before the Rajasthan Bill, there was no compulsion to have government sanction first and only then start proceedings. It could be obtained anytime before the completion of the trial. As per the new Bill, the investigation itself requires sanction, raising doubts about whether FIRs will be registered at all in corruption cases against public servants in the state. In cases where the police refuse to register an FIR, a person can make a complaint to the superintendent of police or ask the magistrate to direct the police to investigate, according to the CrPC. However, the Rajasthan Bill adds the following to Sections 156(3) and 190(1) of the CrPC, weakening that power: “Provided that, under the aforesaid sub-section, no magistrate shall order an investigation nor will any investigations be conducted against a person, who is or was a judge or a magistrate or a public servant, as defined under any law for the time being in force, in respect of the act done by them while acting or purporting to act in discharge of their official duties, except with previous sanction under Section 197 of the Code of Criminal Procedure, 1973.” This will weaken police and investigating authorities by removing the powers vested in them by law to initiate even a preliminary inquiry.

In August last year, the Maharashtra government amended Section 156(3) and 190 of the CrPC wherein no complaint can be filed against public officials without valid sanction from a competent authority. It requires that prior sanction of the government be taken if a magistrate, on a private citizen’s complaint, orders an FIR to be lodged against a public servant. Both Sections empower the magistrate to order an investigation on receipt of a direct complaint from any person.

Section 156 refers to a police officer’s power to investigate a cognisable case and says: 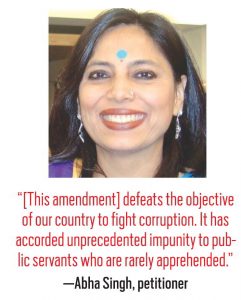 Section 156(3) should be read with Section 190 (cognisance of offences by magistrates) and says:

(2) The chief judicial magistrate may empower any magistrate of the second class to take cognisance under sub-section (1) of such offences as are within his competence to inquire into or try the case.

The amendment to the CrPC is discriminatory because while it gives no protection to the common man, it places public servants in a privileged category.

The Maharashtra government’s rationale for bringing in the amendment was high-ranking civil servants, MLAs, policemen and elected members of panchayats were frequent victims of motivated, malicious and false complaints of corruption, custodial torture and other illegalities. Investigation and prosecution of these charges were placing hurdles in government decision-making and functioning. Singh has challenged this as being ultra vires of the constitution, and going beyond the powers accorded to the state legislature, as it intends to amend the Prevention of Corruption Act, 1988 “through the backdoor”.

This amendment creates a “logical impossibility”, Singh contends. This is because the magistrate must apply his mind before granting sanction. However, the facts can come forth only after an investigation is conducted. So how can prior sanction be required before the investigation is started, asks Singh.

Further, the amendment is discriminatory because while it gives no protection to the common man, it places public servants in a privileged category. It also goes against the legal requirement of judicial supervision of an investigation by curtailing the powers of a magistrate.

On May 16, 2014, a constitution bench of the Supreme Court in the case of Subramanian Swamy, while striking down Section 6E of the Delhi Special Police Act, held that any legal provision which mandates the seeking of prior sanction before conducting an investigation or prosecution militates against the letter and spirit of the Prevention of Corruption Act, and is therefore un­constitutional. Section 6E was commonly known as the “Single Directive” and stated that no bureaucrat holding the rank of joint secretary and above, and no MLA or MP could be proceeded against without the nod of the government or the respective competent authority. The Court held that any law which created a special category of public servants treated differently and granted more protection is illegal.

As per law, the police are bound to register an FIR and investigate, and in case it doesn’t, going by the constitution bench ruling in the Lalita Kumari case on November 12, 2013, it will be liable to face both administrative and criminal proceedings. Sections 156(3) and 190 further strengthen a citizen’s right—by providing that a magistrate can direct the police to lodge an FIR or conduct a proper investigation.

The government has tried to give legal heft to its decision by citing the Supreme Court’s October 1, 2013, ruling in the Anil Kumar vs Ayappa case, which held that a magistrate could neither take cognisance of a complaint nor direct an investigation without the government’s prior permission. But this ruling by a bench of two judges now stands overruled because of the Lalita Kumari decision which was delivered a month later by a larger bench. It is significant that the Lalita Kumari judgment wasn’t limited to the registration of an FIR; it also held that a preliminary inquiry to verify the veracity of the allegations is a must in corruption cases.

This amendment “defeats the objective of our country to fight corruption. It has accorded unprecedented feeling of impunity to public servants who otherwise are rarely apprehended for their enormous acts of corruption,” Singh’s petition contends. Also, the fact that the Rajasthan ordinance was withdrawn because of opposition from even BJP MLAs could add weight to this petition.