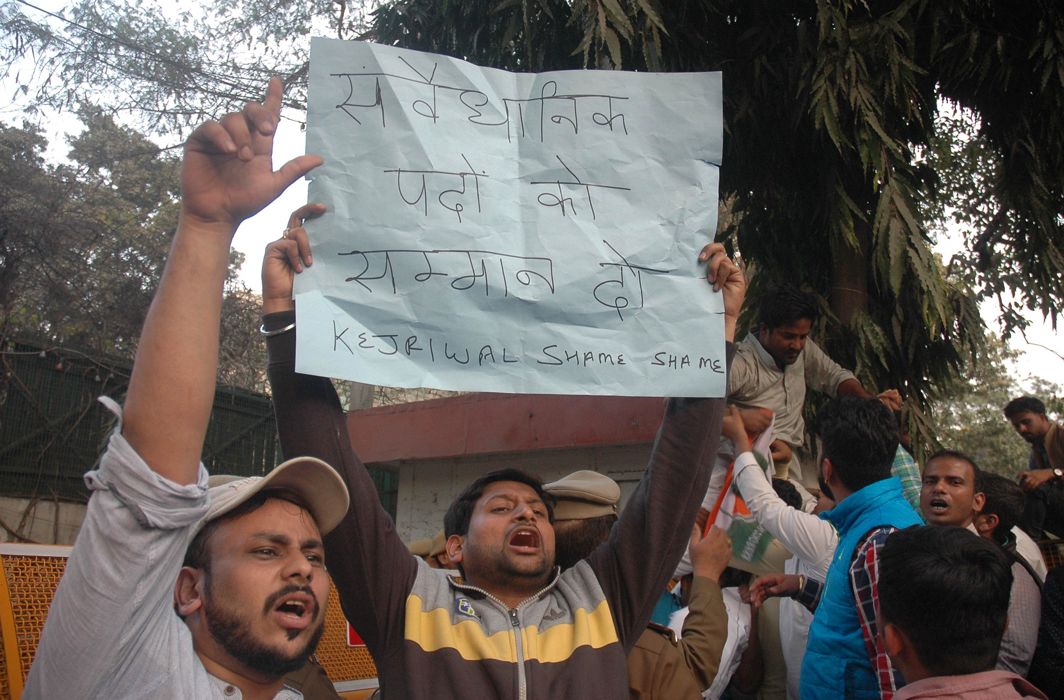 Above: AAP members at a protest to demand respect for constitutional posts. (UNI)

As the case of the alleged assault of Delhi Chief Secretary Anshu Prakash by Aam Admi Party MLAs during a meeting at Chief Minister Arvind Kejriwal’s house on the night of February 19 is being heard at the Tis Hazari Court, things are getting murkier around it.

On Monday (February 26) the Delhi Police alleged in court that the CCTV camera footage from Kejriwal’s residence had been tampered with. The police said they were examining the related hard disc. This allegation was made brought by Additional DCP Harendra Singh. They will be sending the footage to the Forensic Science Laboratory (FSL).

During the hearing, which was principally about the bail of arrested AAP MLA Prakash Jarwal, his counsel argued that he should be granted bail, because the whole matter was motivated by politics with a tussle on between the government and the LG. all work has been stopped. And then there is the BJP too.

The judge asked the AAP counsel as to why the BJP has been brought into this. He reminded him that the Supreme Court had already decided that the LG is the de facto head of the state. He also reminded all that the court is not under anybody.

At that the counsel explained that the BJP was being brought into this because it runs the government at the Centre.

The respondents have opposed the bail, saying that there were a number of criminal cases being investigated, hence he should be inside so the investigations can continue.

The judge will declare his decision on the bail on Tuesday.

The police has claimed that the clock in the cameras (and the recording system) has been altered (tampered with). Police had seized the hard disc of this recording from

Kejriwal’s residence on Friday. The police has said that it had to go to the Chief Minister’s house because their request of handing over the disc was not met.

In all 21 CCTV cameras and a hard disk were examined by the police. The police said that 14 cameras were running and seven were not working at the time.

Meanwhile, the AAP government, somewhat shaken up by this incident, is thinking of live streaming its official meetings. This was told to the media by a senior government official.

He said that if the plan was passed, the upcoming budget will allocate funds for it.