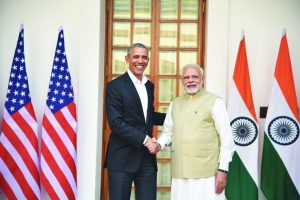 It is diplomatically tricky for a serving head of government to hold talks with a former US President who is a political rival of the incumbent in Washington. However, Prime Minister Narendra Modi’s working lunch for Barack Obama, who was in Delhi for a speaking engagement, was a high-powered one. Just eight people, four from each side, were present, with the Indian delegation consisting of National Security Adviser Ajit Doval, foreign secretary S Jaishankar, a senior diplomat posted as Joint Secretary in the PMO, Gopal Bagley, and the private secretary to the PM, also from the Indian Foreign Service, SK Singla. Obama’s main aide was also a diplomat—Richard Verma, former US ambassador to New Delhi. So what did they talk about? The composition of the delegation offers a hint. Bagley, who was till recently spokes­person for the ministry of external affairs, had a long stint as Joint Secretary in the ministry’s PAI Division (Pakistan, Afghanistan and Iran), while Singla was earlier posted in the Indian embassy in Tel Aviv. Jaishankar had a long stint as Indian ambassador to the US while Doval’s expertise is security and counter-terrorism. One can join the dots.

Rahul Gandhi’s elevation as party president, expected as it is, coincides with his growth as a leader and a discernible advancement in political maturity. That has been visible on the campaign trail in Gujarat and is a reflection of the team that he now depends on which has expanded in recent months. RaGa now holds consultations with former PM Manmohan Singh and former finance minister P Chidambaram, for their inputs on economic issues, which are now a regular feature in his campaign speeches, particularly employment, inflation, GDP and GST.

In his attempts to make inroads into the majority community vote, he has been seeking the advice of Karan Singh, an expert on Hinduism. It was on Singh’s advice that Rahul started his temple rounds. On international affairs, he is increasingly relying on Shashi Tharoor who has vast experience in senior positions at the United Nations, while Sam Pitroda is advising him on the Gujarati electoral psyche as well as regarding Rahul’s outreach to NRIs and a global audience. For outreach to Dalits and SCs, Rahul leans on former bureaucrat K Raju while Randeep Surjewala is his pointsman for any dealings with the media. Others who have instant access include Jyotiraditya Scindia, Sachin Pilot, Kamal Nath and Milind Deora who provide state-specific imputs and are on the same wavelength as Rahul. 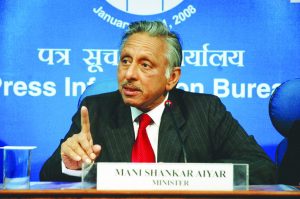 Senior Congress leader Mani Shanker Aiyar, who was suspended from the party for his “neech” remark about Prime Minister Modi, is just one more example of political rhetoric which has bedeviled the Gujarat poll scenario. The Prime Minister was also at his sarcastic best during an election rally when he took a dig at Rahul Gandhi’s election as Congress President and quoted Aiyar, saying that even Congressmen were comparing it to Aurangzeb’s ascension to the Mughal throne. In other words, dynastic succession. Not many people bothered to check the original statement by Aiyar given to a TV channel. Aiyar’s statement did not draw any parallels between the Congress and the Mughals—he was in fact pointing out the difference between dynastic rule under the Mughals and what happens in a democratic set-up, referring to the ongoing internal elections in the party. Modi twisted the statement out of context and only mentioned the Mughal comparison.

The BJP’s IT cell is also doing some creative editing. It had released a video of Rahul saying: “I will make such a machine, that from one end you can put a potato, and from the other end you will get gold.” The video was widely shared on social media. It was taken from a speech where Rahul said this: “Modi promised the Adivasi community Rs 40,000 crores, but he didn’t give them a single rupee…He told potato farmers that he will install such a machine, that if you feed in potatoes from one side, you’ll get gold from the other side. These are not my words, these are the words of Narendra Modi.” This is how fake news gets passed off as fact.