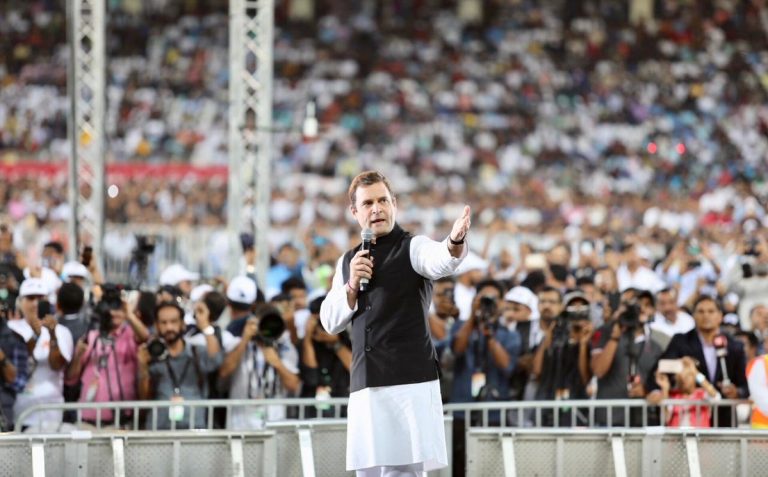 For yesteryear’s rockstar of Madison Square Garden, Prime Minister Narendra Modi, Congress President Rahul Gandhi’s trip to Dubai must have been galling. Compared to the choreographed hype seen in New York in September 2014, the Gandhi scion’s Dubai trip got a spontaneous response and was a smash hit on the internet. Though almost ignored by the mainstream media here, social media was flooded with videos of his visit. It started with the stupendous welcome at Dubai airport with excited people falling over themselves to see him, followed by his speech at a stadium which was chock-a-block with Indians, mainly Malayalees, not only from the Emirates but other parts of the Gulf region too.

There was also a video of him being invited to the opulent residence of Yousuf Ali, the richest Indian in the UAE. One had barely taken in the ostentatious gold and white interiors than another video surfaced of Rahul and his entourage, which included Sam Pitroda, having breakfast with another top businessman, Sunny Varkey. The decor, complete with lovely flower arrangements, croissants, turkey and other delicacies, was a sight to behold though Rahul is believed to have had only orange juice and scrambled eggs. This attempt to woo cash-rich NRIs has already given jitters to the government, leading to fake news  about the visit going viral. A website, My Nation, claimed that Rahul was embarrassed by questions from a 14-year-old about Congress rule earlier, while one Twitter user said Rahul had breakfast worth £1,500 at the Hilton. Some social media post also claimed that he had beef at the breakfast meeting. All were found false. It was a case of Saffron going Green!

Return of the Native

The homecoming of veteran politician Sheila Dikshit to active politics as the new chief of the Delhi unit of the resurgent Congress party has been more widely welcomed by rank-and-file workers than was expected. In fact, her elevation as president, replacing the younger Ajay Maken, had smooth sailing even within the portals of the high command where there was near unanimity between the so-called old and new guard.

The Congress badly needed this show of unanimity after a mini civil war broke out over the chief ministerial rivalry between Ashok Gehlot and young firebrand leader Sachin Pilot in Rajasthan following the Congress’s recent victory in the assembly polls. Maken and Dikshit had been known to be at loggerheads in the past which is part of the story behind the Congress’s poor showing in Delhi which allowed AAP to sweep to power.

But with a different political wind blowing across the country, the Congress is looking to regain strength in Delhi’s seven Lok Sabha seats which may entail some backroom arrangement with the ruling AAP which could be losing steam but is still a dominant force. Dikshit seems to be the pick because she is a three-time CM, an able administrator, and a tough but flexible negotiator who will be far more adept in dealing with Arvind Kejriwal and his party honcho Gopal Rai than Maken who is seen not only as a divisive element within the Delhi Congress but also as an uncompromising hardliner when it comes to AAP.

Her obvious drawbacks are her advancing age (she is 80) and relatively poor health. She has just returned from abroad following a heart procedure as well as eye surgery. But friends who have met her say her energy levels are high. For politicians, age is just a number. Former prime minister Manmohan Singh at 86 has emerged as the most formidable critic of Prime Minister Modi, and LK Advani at 91 and Murli Manohar Joshi at 84 are still chugging along.

Bolstered by the New Year’s Day Women’s Wall that saw more than 30 million women—or so it is claimed—link hands along Kerala’s 620-km-long national highway, left and progressive elements in Kerala decided to go a step farther. The decision had a lot to do with the fact that, on the day the eyes of the entire state were focused on the great wall of Kerala, two women, with not a little help from the local Marxist government and its handpicked police officers, sneaked in under cover of darkness and created history by becoming the first women to enter the Sabarimala temple after the landmark September 28 judgment of the Supreme Court.

Frontal outfits of the ruling CPI(M) thus hit upon the idea of a two-day pro-women event at Kochi’s Marine Drive. Named Aarppo Arthavam (Celebrate Menstruation), its primary aim was to debunk the orthodox notion of menstrual impurity and to protest against primitive attitudes towards women’s monthly cycles. Soon it got the tacit support of the CPI(M) whose cadres took to social media to spread the word and it even became one of the top trending stories on social media. So much so that Chief Minister Pinarayi Vijayan even agreed to be the chief guest at the event’s closing session.

Cameth the hour but never cameth the chief minister. The organisers waited and waited and waited …and waited. Vijayan is normally a stickler for punctuality, so eyebrows went up at the long delay. Soon, it dawned on them that the CM would not grace the occasion. The reason:  The “grand” entrance to the venue was built in the shape of a giant female sexual organ. It’s easy to understand why a CM, even one as progressive as Pinarayi Vijayan, opted to back out.

While the controversy over the recent sacking of Alok Verma as CBI director has not completely died down, a new one may soon erupt over who may lead the agency after the selection panel finalises a candidate to replace interim chief Nageswara Rao with a full-time one. The selection panel, comprising Prime Minister Narendra Modi, Chief Justice of India Ranjan Gogoi and Congress leader in the Lok Sabha Mallikarjun Kharge, is scheduled to meet on January 24 to discuss Verma’s successor.

Many believe that YC Modi is the PM’s choice. He was part of the Supreme Court-appointed SIT that probed the 2002 Gujarat riots and gave a clean chit to Narendra Modi. The Congress has claimed that Verma was removed because he was about to order a preliminary inquiry into alleged irregularities in the Rafale deal. If the prime minister succeeds in pushing for YC Modi’s appointment by a majority opinion (Kharge is expected to dissent), protests from the Congress are a given.

However, to stun the Opposition, Narendra Modi may back the nomination of Mitra. This choice may leave Kharge with little to protest against—she has had a long stint in the CBI in the past, is among the seniormost IPS officers eligible for the job and, most significantly, would be the first woman CBI director.

Sticking it to Shivraj

Recently ousted Madhya Pradesh Chief Minister Shivraj Singh Chouhan had hoped that his party’s narrow defeat in the assembly polls, despite being faced with 15-year anti-incumbency, would have helped him stay on as the BJP’s face in the state. However, Prime Minister Modi and party President Amit Shah don’t seem eager to give Chouhan a chance at resurrecting his political fortunes.

Chouhan had hoped to be nominated as Leader of Opposition in the state assembly but the central leadership put a stop to his ambition. Chouhan-baiter and Bundelkhand heavyweight Gopal Bhar­gava has got the post. Chouhan has instead been made the party’s national vice-president, a post he shares with nine other leaders including lightweights like Vinay Sahasrabuddhe, Renu Devi, Shyam Jaju and the other two dethroned chief ministers, Raman Singh and Vasundhara Raje.

The buzz now is that Chouhan may not even lead the party’s upcoming Lok Sabha campaign in the state and will have a limited role in selection of candidates. The Modi-Shah duo will instead depend more on the feedback from Chouhan’s rivals, BJP national general secretary Kailash Vijayvargiya, state unit chief Rakesh Singh and Bhargava, while drafting the campaign. Chouhan may, however, be asked to contest the Lok Sabha polls—in all likelihood from Vidisha, the seat currently held by Sushma Swaraj who has announced that she will not be returning to the electoral fray.